My intentions with this blog were to talk straight from the heart about all my worry and anger of subjects, local and global.
Instead I find myself entirely happy and blessed, with no midwinter blues at all.
I got to borrow stacks of old slides from my uncle. Husband Gunnar projected them into my PC via mysterious ways with lots of skills and hours spent.
I got some of the most valuable moments from my childhood
replayed. 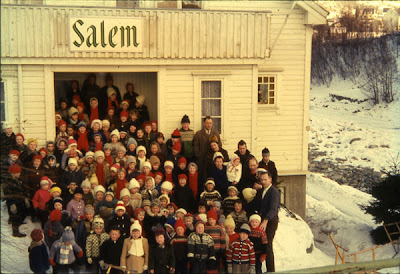 When grown-ups forget themselves to pass on immortal life to coming generations, that's when heaven touches earth.
My uncle Leif worked, yes, worked hard indeed, every Sunday for thirty years to spread the good gospel news to children of all social backgrounds and needs. 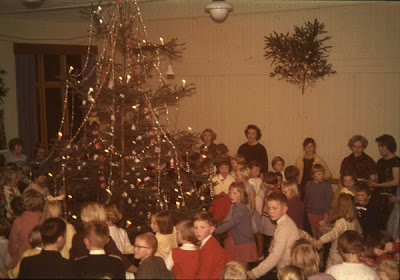 He had more than 100 pupils in his class. He knew them all by name and gave each a feeling of being special.
The "Christmas Tree Parties" at Salem are still a peak in my life. With a small bottle of soda water and three kinds of cookies in a paper bag we had a ball. 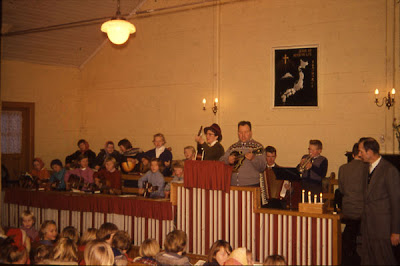 Our parents were ordinary people, trying to make a life for their families after a tough depression and five years of war.
Yet they did not hesitate to buy us guitars to be part of the "Junior Band". Sven and Betty gave one day a week to teach us our first chords. The giggling girl playing the instrument without keeping attention is of course me. There was room for naughty girls as well. 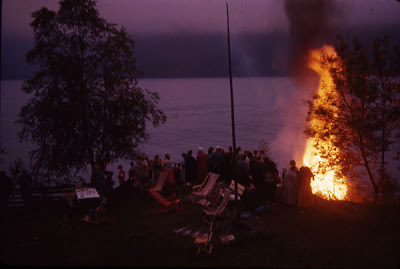 Nils had this unique place by the fjord. An old hut also housing a rowingboat. A shore for bathing and plenty of room for playing all kinds of games for the young and old.
The celebrating of Midsummer, St. Hans in Norwegian, gathered people from all beliefs or none believers as well.
There was no threshold at all.
Import of cars was limited in those post war times. Two of my uncles lent their buses for free, and thus provided transport for everyone on the narrow, curvy "Dollar Road". 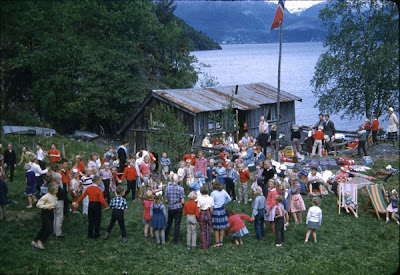 No barbecue, no fancy food. Sandwiches and juice tasted wonderful, sitting on an old plaid on the grass.
There was laughter, songs, games, bathing.
The pastor would hold a brief sermon, and there was no end to the variety of self entertainment till the sun went down. 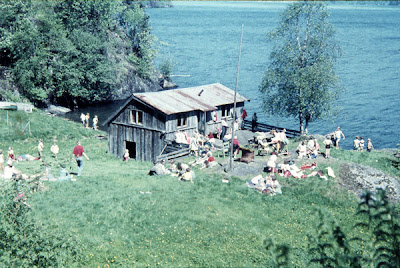 Looking at all the familiar faces I feel comforted.
Some became nurses, drunkards, sailors, managing directors, whores, doctors, musicians, teachers, factory workers, writers, politicians, housewives, engineers, fishermen. Scattered from Dubai to Seattle, the Polar Ice to Australia.
Most of the adults in the pictures are dead by now, promoted to heaven, as the "Salvation Armists" would say.
No one will ever forget the spirit of genuine care and devotion given us in those golden days of our childhood.
Or my uncle's challenge to "stand up like Daniel", and the promise that HE would never leave us or let us down.
So far my uncle's been right.
Hallelujah, I think.
Lagt inn av Felisol kl. 1:04 pm

I went to post today and saw a message that said I needed to “moderate comments”. I must have hit a button the other day by accident. Sorry about that. It’s fixed now.

Thank you for your concern. My wife is still fighting this one and my son is home sick today too. My daughter and I have it a little, but are doing okay.

How much garlic should be eaten? I’ll try anything.

And thank you so much for all your kind comments. I’m glad you enjoy my blog and am honored to have you read it. Feel free to lurk all you want.

I hope you and your family are well!

And I love the previous one as well. Thank you very much for that.

My wife will be thrilled when I show her!!

You are a wonderful lady, my friend.

Yes, very nice pictures and very touching, what you wrote. Thanks. I think I sort of needed it.

(and thank you for your very kind comments in my blog)

Thank you for your comments on my blog Elise. It comforted me.