NOT A SAINT, NOR A WHITCH, BUT A WEAK BITCH 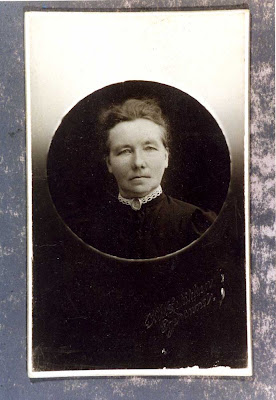 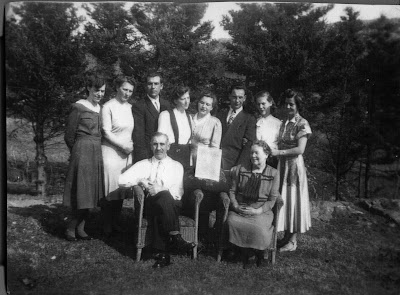 I am a descendant of coast women, mostly.
My fore-mothers were a long line of strong, conscious, educated, but family oriented females.
Farms on the south west coast of Norway were often too small to breed the large families.
Husbands had to seek a second outcome either by fishing, market trading, or as very often was and still is an option; Cross the Atlantic for work either in farming, mining or fishing.
Their housewives then were left alone with everyday responsibilities for house-holding, animals, feeding young and old, cultivating land and educating youngsters. A poet said, "they believe in the shilling, but seek their comfort in God."
They had to, though, 'cause the times were rough, they became worn, but their souls stayed warm.
They were trusted members of the community, but treasured cooperation the most.
They laboured as if in front of God's face, not to attract humans.
Half of my genetical inheritance come from these hardworking, stubborn, outspoken, at times, alas, self righteous..and a tiny bit narrowminded, proud and gifted survivor women..
To me that means I've got to do and say what to my best knowledge is true and right.
I've got to defend the ones that are weaker than I am, who cannot stand up for themselves.
That's how I choose my education, my occupation and later on family life.
I guess that is as far from American middle class culture as one can get.
No climbing culture, no sucking up, no backstabbing, always calling the thing by its right name.
I cannot be otherwise.
I'm struggling keeping my mouth shut, though.
"He who can strain his tongue is stronger than he who can conquer a whole town," my father used to teach me.
My best friend and colleague said, "Why do you always have to be the first to put your head on the block? Give us a chance as well!"
The other thing is learning to distinguish between people who really do ask for advice or just seek consent to keep on doing what they anyway are determined to do.
There's no use in discussing when the answer is already given. A complete waste of time and effort.
I'd rather go collecting snails in my garden.
My intention with this blog was actually to show more than one dimension of my life.
I first and foremost am a God fearing mother and family oriented woman.
I also have many skills, interests, thoughts and ideas about malfunctions in society, about hypocrisy and the real evil doers.
I actually want to be bitchy when pointing finger at topics usually swept under the carpet.
I have not been directed that way lately.
I have had to learn a hard lesson of being dependant on others, above all on God.
I don't at all like the feeling of being small and weak, it's threatening to the very core of my personality.
Nevertheless I am a richer and wiser person now than I was 6 months ago. I have endured a great loss, but also experienced what really is fireproof.
God and His Grace alone.
Lagt inn av Felisol kl. 8:39 pm 6 comments: Koblinger til dette innlegget

I am a bit distressed over mixing the date of Canada Day.
So I'll reveal a secret to make up for it.
Gunnar has had a long going affair with an English/ Canadian Lady.
She's younger than me and he fell in love with her at the age of 21, AND HE'S STILL MADLY IN LOVE.
I am a fourty-niner, she's born in 1954.
English born, but set sails for Canada the same year.
She landed in Vancouver and was immediately adopted by a Vancouverian family, whose name is still unknown to us.
Her name is Morris Garages, if that rings a bell to anyone.. 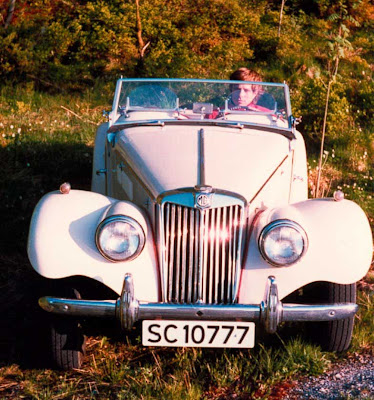 and she's formally addressed as MG TF 1954.
In the years she stayed with this Vancouverian family, her skin was changed from black to salmon pink and ended up as ebony white. 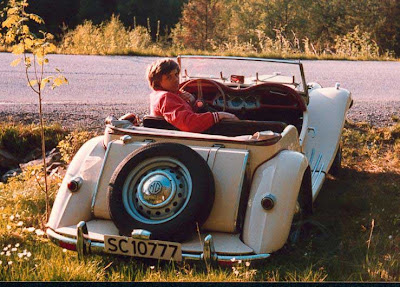 Our spring of 87
English Jeff and Norwegian Thurid met in Vancouver 1963. They fell in love, bought themselves the car and drove Canada coast to coast, before the three of them went to live in Norway.
My Gunnar was a poor student when he first met with the MG in 1970. (Jeff and Thurid were running a farm and had meanwhile changed to Rovers.) 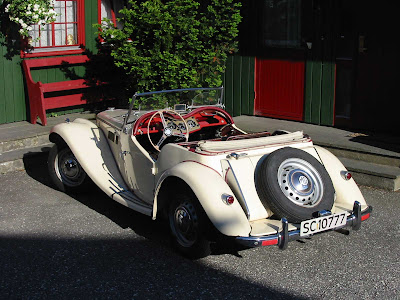 First he asked Thurid if he might be allowed to buy the car of his dreams, and then he pledged his father for financial support.
The girl of his dreams became his for 1200 American dollars, and that was quite a sum in those days.
He also had to give his word, never to let her out with a salmon pink coat again.
By now the two of them have stayed together for 36 years. Gunnar has picked her apart and rebuilt her two times. She's changed from dark blue to ivory white, including eleven layers of special coating. 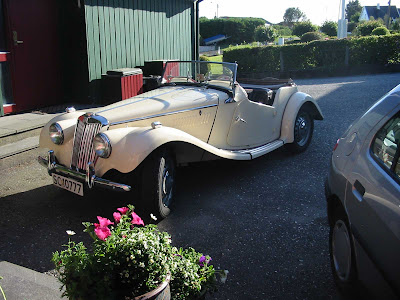 20 years ago, when Gunnar and I became a pair, she carried us all over the county.
Gee, was I proud, when he drove me to work in that little, white wonder. 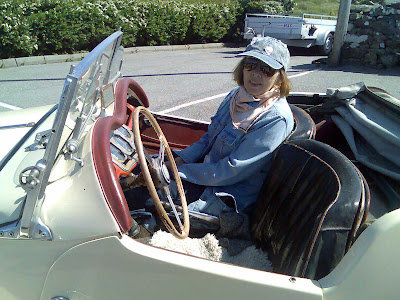 Spring of-07
Being a genuine vintage car enthusiast, Gunnar has all the facts, books and papers of his car, except for one.
What was the name of her first owner??
Does anybody remember seing this beaty riding the Canadian roads from 1954 to 63??
The person able to supply us with information, will be offered a free ride....at least in Norway. 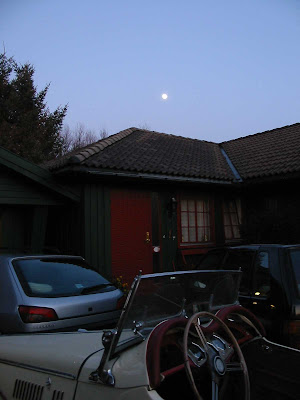 Any kind of information will be highly appreciated by the whole family.
It's all about roots, or rather about peerage when the Noble Lady MG's concerned. 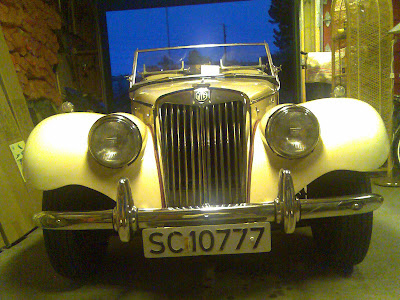