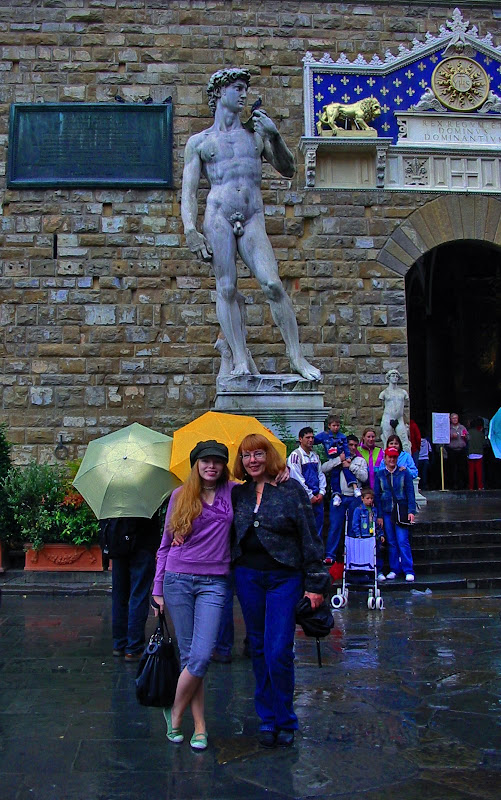 1. What was the last movie you saw and what did you think of it?

Walt Disney's Fantasia. Serina gave me the new released DVD for Christmas and we enjoyed it as much as we used to love the old video. It's a classic masterpiece in every sense of the word.

2. If time and money were no issue, where in the world would you travel to?
The five golden I's; Israel, Iceland, India, Italy, Ireland . Roots of our civilization.


3. Would you ever consider living in a foreign country?

I might, but not as long as my mother is still alive.
Ireland or Italy have equal priorities, then Gunnar would have to agree, I'd never leave him.

4. Where do your ancestors come from?
All the great great great great grandparents on my mother's side come from the district of Jæren, Norway. My father's mother's ancestors are all from Eastern Norway, but the very best of my forfathers, granddad Erik Herman Ljung came from Sweden.
He was a one in a million man and still means the world to me.

5. What historical figure, (it can be recent history as well), would you meet if you could and why?

Jesus. Because He's the Alpha and Omega.

6. Which historical figures (again, can be recent) are you fascinated by?
People who have had significant influence over my development as a human being.
Handel, Bob Dylan, William Shakespeare, Bach, Louis Armstrong, Astri Lindgren,Gunnar's grandmother, King David, Michelangelo, Giovanni Guareschi, the minister in Sauda Church in the 60- ies, Rolf Idsøe and on and on....

Every Grain of Sand

In the time of my confession,
in the hour of my deepest need
When the pool of tears beneath my feet
flood every newborn seed
There's a dyin' voice within me
reaching out somewhere,
Toiling in the danger and in
the morals of despair.

Don't have the inclination to
look back on any mistake,
Like Cain,
I now behold this chain of events
that I must break.
In the fury of the moment
I can see the Master's hand
In every leaf that trembles,
in every grain of sand.

Oh, the flowers of indulgence
and the weeds of yesteryear,
Like criminals,
they have choked the breath
of conscience and good cheer.
The sun beat down upon the steps
of time to light the way
To ease the pain of idleness
and the memory of decay.

I gaze into the doorway of
temptation's angry flame
And every time I pass that way
I always hear my name.
Then onward in my journey
I come to understand
That every hair is numbered
like every grain of sand.

I have gone from rags to riches
in the sorrow of the night
In the violence of a summer's dream,
in the chill of a wintry light,
In the bitter dance of loneliness
fading into space,
In the broken mirror of innocence
on each forgotten face.

I hear the ancient footsteps like
the motion of the sea
Sometimes I turn, there's someone there,
other times it's only me.
I am hanging in the balance
of the reality of man
Like every sparrow falling,
like every grain of sand. 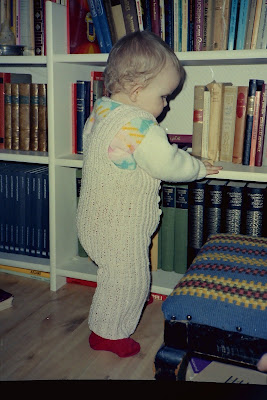 No need of a walking chair. Curiosity made baby girl stand on her own feet. 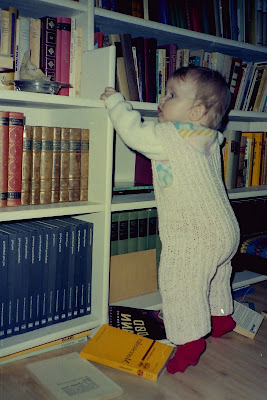 Interesting.. even kept her on her toes.. 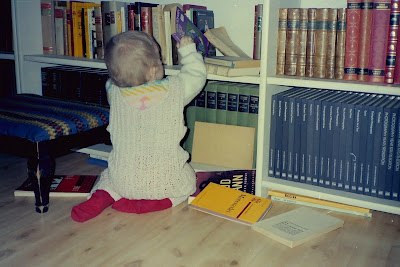 The reason why I gave up keeping books in alphabetically order

As google will not let me comment on my Ruby Tuesday blog under "comments",
I have to publish them here.
Dear Colleen,
See what I mean; no control at all. These things which seemed so important beck than...
Can you imagine; when the health care nurse came for her first home visit, Gunnar and I had made a list of 20 "vital" questions?

Ralph,
In retrospect everything about the babies are adorable. Back then I clearly see, I should have laughed even more.

Liz,
It was fun and overwhelming being overpowered by my four month old daughter.

Dear Mrs. Mac,
Serina was and still is strong willed. That has made her a survivor, and I so respect her for that.
Being a mother still is a challenge and question of balance to me.
I am grateful all the time..
I find the Norwegian health care system for children very satisfying. The town is divided into four stations and parents have free nurse and pediatrician till the child is seven. The first two years. the baby is regularly admitted for controls and vaccinations. Vaccines are free and the parents may decide whether the baby should have it or not. Rich and poor are given the same, first rate treatment.

Dear Sonja,
You are right.
Serina is as dear to me to day as she was the day she was born.
She has brought far more smiles than tears into my life, and given life a new dimension.
The day Serina was born, my parents, my brother and Gunnar were out, celebrating. Gunnar saluted that they all had gotten a new status in life. (Fatherhood, uncle and grandparent-hood)

Gizelle,
Indeed, time flies, like a watch in the morning.
I wish I knew back, then how valuable every minute was.
I still find time my most priceless asset.

EG Wow,
I fully agree. Some mental characters are there from the beginning. I guess I wasn't aware of that back then. Physical heritage is accepted, likewise partially gifts like intelligence, musicality e.t.c.

My grandma, mother of nine, used to say, "God gives the talents. How they are used, is every humans responsibility".


Pagan Sphinx,
I agree. Good public health care should be available to everyone.
If we say that all humans are of equal value, they should be treated so as well.
Finding those long forgotten photos was a huge source of joy for me as well.
One single photo can make doors of memory wide open.

Dearest Terry,
I never knew that you have taken care for a baby for a year.
I might have had you for a candidate to such unselfish work. You have a heart of the size of a barn.

(My doctor says the only thing you can use washing ears with, is your elbow!!) No Que-Tips.

We had baby "dolls" in nursery school, and even exams in baby caring. I'd forgotten all about it 20 years after. Besides, child care theory will always turn out to be inadequate. There are thousands of questions professors cannot figure out on beforehand.
I'd thought you to be an expert though, with 7 younger siblings.
I used to bombard my friends with all kinds of questions. Till this day I am grateful for their patience with me.

Dear John C,
I'm so glad you are rewired! I have missed you and your
surprising and new way of seeing things.
For your hip I'll recommend you to contact the American RAW wrestler association. I think Hulk Hogan might have a gold belt or two to spare...

Ann,
but, feeding satisfied babies are also the most rewarding situation I can think of.

Robin,
When my book of life shall be opened, this will belong to
"Eternal moments".

Gattina,
How lucky you are; grandchild.
Looking at old pictures really reminds us about how happy and lucky we were.

I like your cat-sign.
I might as well hang by the entrance door.
I think being adopted by Miss Kitty has taught me to accept that she is but a loan.
I cherish every day we share, and accept that she probably will be gone one way or the other before me.
I guess she might deliver some kittens in a short while. After that we'll have her sterilized.

Steve E,
You pinpointed the nature of our daughter.
She was born a B human.
Full of joy, laughter and energy when it was bed time.
We kept an arsenal of song books and fairytale books by her bed.When her dad fell asleep in verse # 35, she was not amused.

Carletta,
Those were the best moments of my life.
Serina was the kind of baby who would make everyone smile.
Guess I'm not exactly objective, when saying so.

Dear Amrita,
Yes I was both proud and happy. I still am.
And a lion mother, if and when that is necessary.
Amrita,
You need to have a chat with Tutankhamen for your gold needs.
Oh, I wish there were something I could do to make your pains go away.
I think the ayurveda medicine have good alternative treatments. I still have your holy basil growing in our living room.I have harvested some leaves for morning tea. It's definitely an indoor plant in arctic areas.
I wish you all well, and hope the spring will releave your pains. 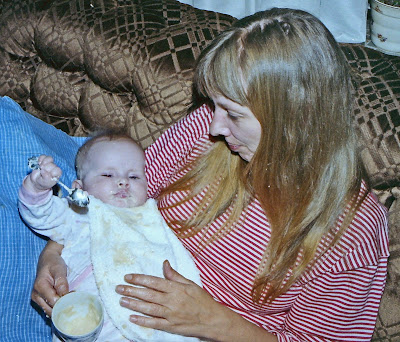 Gunnar found old negatives the other day. What fun to scroll down memory lane. Serina was just past 4 moth when the public health nurse told it was time to start feeding her porridge.
In Norway the public health nurse is involved with children's
upbringing from birth till 18 years. Mostly welcomed advices, but they also make house calls to each new born baby to see that the baby is properly cared for. We felt that "our" nurse was very supportive. 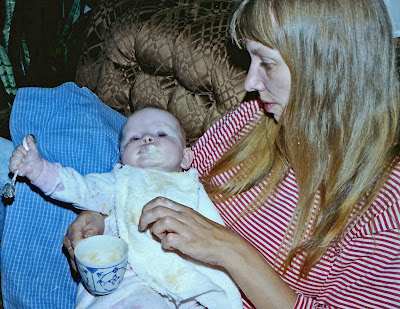 Spoon feeding Serina was not an easy issue. She wanted her milk bottle, period. She literally grabbed the little tea spoon in her own hand and insisted on being in control of her own porridge. 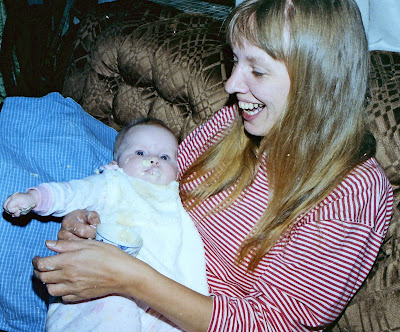 The aim was getting a half teaspoon full in her mouth.
The result was porridge in her eyes, fingers, my hair, hand and the sofa. In Norway there's an expression, "To take the spoon in one's own hand". Our daughter did that from the age of four month, and she never let go of it.

Pictures and scanning by Gunnar photo shopping by me.