The magic folly of spring is sweeping over us.
The sun beats the dark by 13,6 hours to 11,6, and it will go on and on till the nights become blond again.
"Blond on blond" to quote Dylan.
I've been out hunting down the spring today.
This is what I found:
In Norway people go skiing and skating till late April.
Nice hobby for masochists. 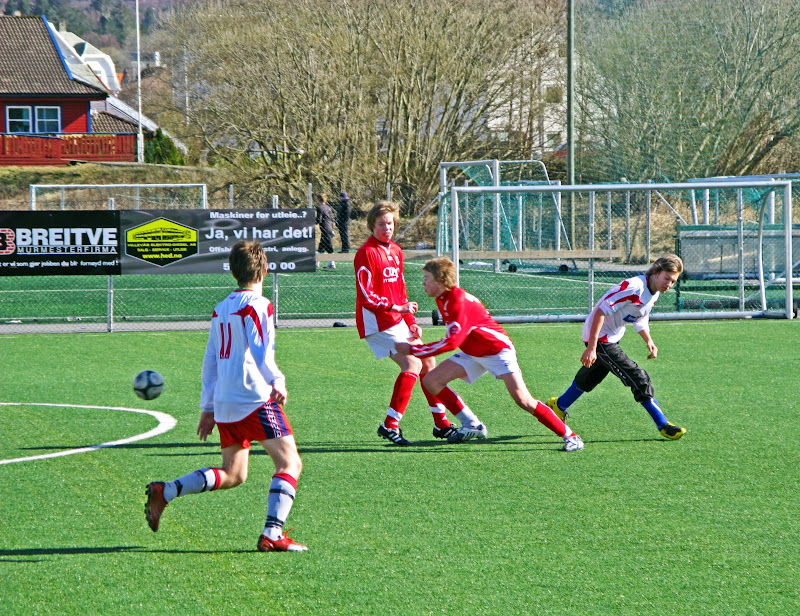 (Never thought that I should be a sports photographer, not even in the junior league!)
Football, the real one, is no leisure game.
It's more important than life and death, a famous English coach said.
Footballers come crawling out as soon as the snow is gone.
We were a trip at Norway's eastside this week.
From the plane we saw the landscape covered in a white coat of snow, except from the regularly green"stamps", the grass covered football stadiums.
Pope John Paul II said:"Of all the unnecessities of the world, football is the most important."
Personally I find football overrated, overpaid and totally blown out of proportions in the minds of media and average people.
Except for this single red team called Fire from Bergen.
I sing their songs, I watch their games on the telli, and if Gunnar's broken nose heals well, I hope we can see them live this season.


Emily Dickinson
A little madness in the Spring
Is wholesome even for the King,
But God be with the Clown —
Who ponders this tremendous scene —
This whole Experiment of Green —
As if it were his own!
Lagt inn av Felisol kl. 8:36 pm

We should not go crazy over any sport, and this includes your football (Soccer in the US). But it can be interesting watching the fanatics that will play the game any time of season and anywhere.

In Norway, it seems darker longer over a 24 hour period. But with less sunlight, it seems we play harder and harder when there is actually sunlight!

Lol on the masochist! I would like to play too...but what you said is true...overpaid haha. Enjoy the week!

These junior league teams used to play with all their soul, not for money, neither for recognition, just for the pleasure and the will to win. Fire team is perfect for today.
You succeeded in showing us all the simplicity of that sport; You're a talented sport photographer. That's a snapshot, Felisol ! Thanks to share the John Paul II's quotation.

Nice shot. I am not too keen on football either. I also posted a sports shot this week.

You're right... football would be better if it was hockey ;). I'd also agree that Nordic skiing is for masochists. (Alpine skiing, not so much. That I like, but cross country is waaaay too much like work for me!)

I'm not much into sports but I do like futebol (soccer), basketball and hockey. I mean, if I had to endure those sports, it would be okay. Baseball and American football? Not so much.

I like the Emily Dickinson poem. And the mention of Blond on Blond by Dylan! One of his best...

Pope John Paul II said:"Of all the unnecessities of the world, football is the most important."

Ive never been to a real game, pathetic eh?

Not into the sport but your photo is great, so bright and clear, well done!

love to see reds in the field. very attractive. i used to be a football fan when i was in high school. i don't know what happened but my love for the sport fizzled out.

Along with the warmth of the sun, spring comes the green and brightness of football. Although cricket is number one in India, football is also very popular specially in Kolkata.

I love sports when it's the Olympics! :)
This is a great action shot! Perfect red jerseys!

Dear Felisol, That is a great shot of movement...well Done! I love the clarity of the colors too.

As usual your poetry piece is perfect! Have a wonderful Ruby Tuesday! :)

Dear Felisol, That is a great shot of movement...well Done! I love the clarity of the colors too.

As usual your poetry piece is perfect! Have a wonderful Ruby Tuesday! :)

American football is an obsession to say the least! Our pro team here where I live (Dallas Cowboys) I don't follow anymore. I used to enjoy it but then these "role models" were living lifestyles f excess and vulgarity. What a waste! So many of them act like a bunch of teenagers, immature and rude!
Connie

I thought your post was about football. I had to wait for your photo to fully download to see that they were only playing soccer.

I think that is a great action shot!!

We are still waiting for Spring. We actually had snow on Sunday!
But it looks like you found it...green grass and the young men out playing a game of football. Wow! Great photo's Felisol!!!

I'm positively basking in the sunlight this week now that we've finally moved our clocks to summer time. We know all about football (soccer) fanaticism in my house as well - my son is one! It's all red all the time here too.

I didn't realize Gunnar had broken his nose. Is he alright?

Great shot! Love all the green with flashes of red.

Football, I don't understand. Soccer, yes! My youngest son played for years, and my older son coached him very well. Hope you enjoy the season!

How is Gunnar's nose? I will be praying for his healing.

Dear Felisol, Football season , spring season. I guess they are overpaid because of all the people who are crazy about the sport.

Hi Felisol, hope you are doing okay. This is a nice post, pretty red uniforms. Ah, signs of spring, football.

I am tired of all (American) baseball spring training and am ready for the games to begin. Our team trains in Florida but comes to Houston when play starts in another week or so.
Go Houston Astros!

Our (American) football is a fall sport. We have NASCAR, auto racing, it already started. Basket ball is about to finish, college first, then the professional leagues.
Our soccer (your football) season has already started too. Houston is a team moved here from San Jose, California. We have been doing sooooo good, National Champs more years than not since they moved here.
..

Lovely, colorful, and no snow! A grand day with or without football. Please do take lots of photos of your spring as it emerges (pretty please). I'll do the same should it EVER ARRIVE, argh~

felisol...what happened to gunnar's nose.
i hope he is not in too much pain.

how did serina make out with her project.
i know she must of done an excellent job.

felisol,this picture here shows the real action of this unnecessary game[ha]..it is a real live shot and you did good....love terry

Hi Felisol -- No, skiing isn't in our plans. We haven't skied for some time now. I see why they let seniors ski so cheaply or free now, they don't have what it takes to get out in the cold anymore.

Guadalupe Peak is the highest mountain in Texas (8,749 feet). It is in West Texas, near the New Mexico border. Would you believe there is a hiking trail to the top!
That is only 674 from our home, pretty much due west. We are closer to New Orleans, Dallas, Oklahoma City, or Little Rock, Arkansas than to the mountain.
http://www.americansouthwest.net/texas/guadalupe_mountains/guadalupe_peak.html

We have a lot of water skiing around here, the last time I tried my water skiing was still under the water hanging on to the rope for dear life. I think that is a sport I can't ever do.

Happy Palm Sunday to you. Our church observes this, but not in a big way. We will have a Thursday night service. Good Friday is a holiday of sorts, I don't know if the banks close or not. Easter will be all out for the whole state and pretty much the country. We are SUPPOSED to be a Christian nation. Our heritage can't be changed.
..

Terry & Amrita,
Serina did fine. How should she not with people praying for her around the globe.
She'll be home tomorrow, Palm Sunday.

Gunnar's nose broke as he collided with an unmarked glasswall at the airport. We were running to catch the train for Oslo.
Had we lived in the USA, we could have sued and lived happily ever after.

The Dylan concert was wonderful, and we met with Serina afterward, went to Friday restaurant and had a real good time.

Jim,
I looked up the Guadalupe peak and am amazed.
I always think of Texas being flat and full of oil-rigs and space ships. I also know there are golf courses and beagles.
I blog, therefore I learn.
Texas is huge, and therefor also of a variate nature.
Actually Serina's schoolfriend stayed for a year in Texas and is quite nostalgic about it, we therefore had to go to this Friday thing, where the servants wore red & white striped shirts..

Dear John C,
6 billion people play or love football.
A small percentage play the American way. I have watched, super bowls only. It's a very stuttering game with all these touchdowns and commercials.
I think there would be a better flow in the game if not for the commercials.
They make my head spin.

Dear Vicki,
after you wrote about praying, the healing begun.
What a wonderful healer we have got!

Ces,
One should allow one self to attend a sports event once in life.
A little bit of madness is only healthy.
Sport fanaticism is unwholesome and unworthy.

Mojo,
I never had the balance for slalom.
I miss being able to cross county skiing. My crunchy bones cannot take a fall anymore.
But in spring I'm all done and finished with snow.
The birds are singing all day with exclamation marks like the ones in Snoopy.
They miss their old nests, but are already building new ones.

You may be on the far side of the sea, but you are always close to my heart. I'm glad to hear that the healing has begun...praying, caring, thinking of you and Gunnar.