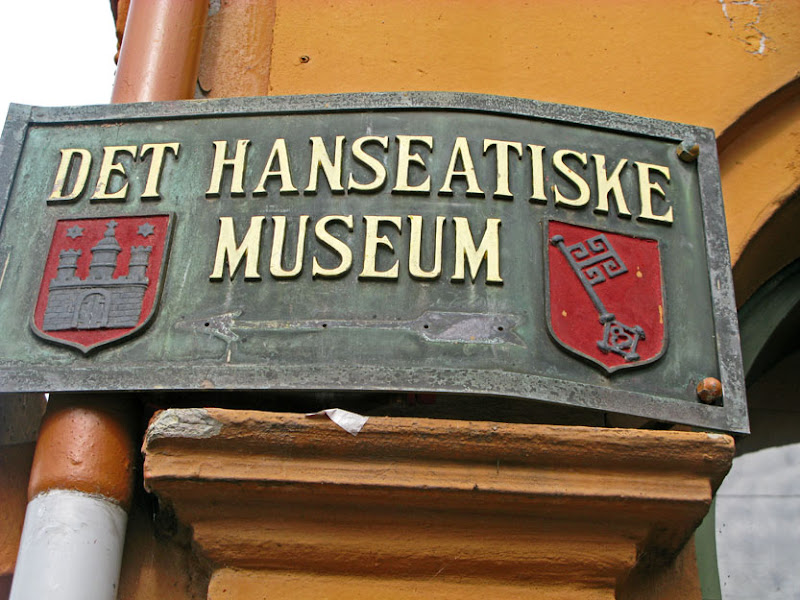 The Hansa museum tells about how the mighty first European trade organization, The Hanseatic League, dominated all trade in Bergen and all Western Norway, and for that sake the rest of Europe, from about the 13th to the 17th century. 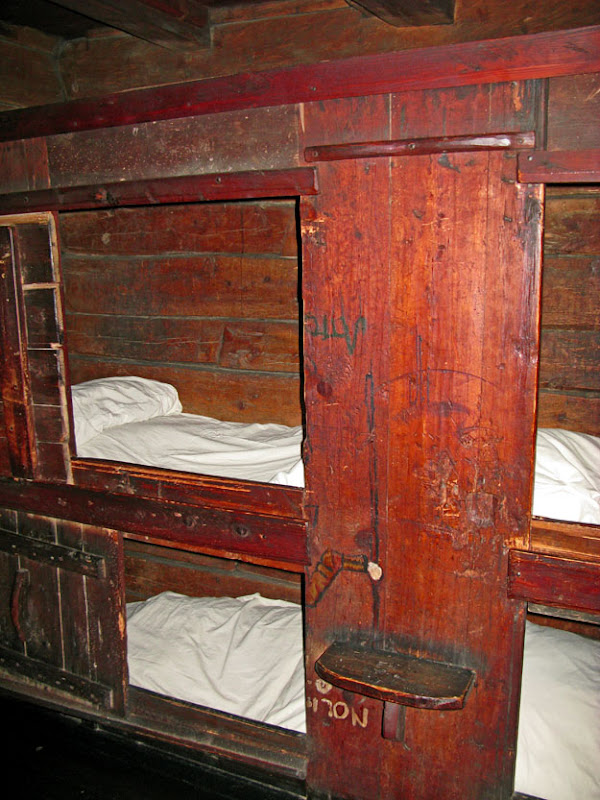 The young apprentices, Die Gesellen, came up from Germany and were not to fraternize with the tempting young Norwegians. They were simply locked in their beds at night. 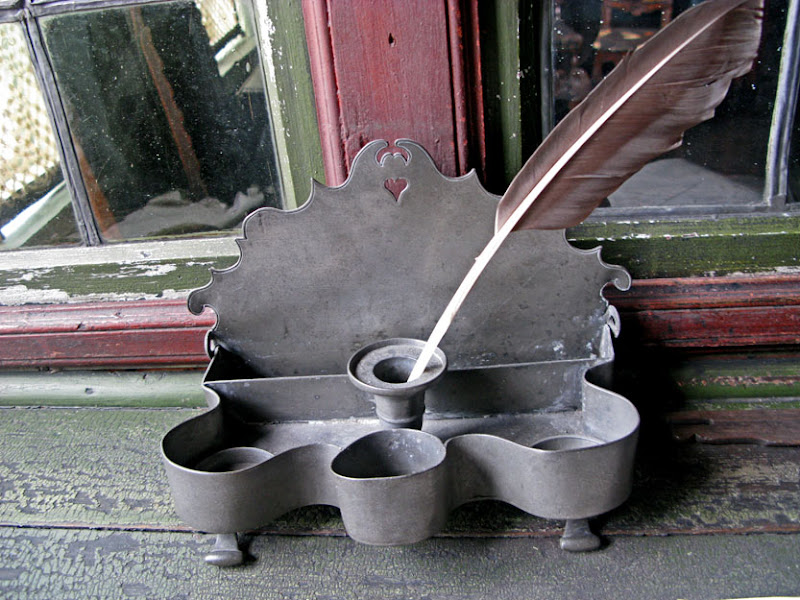 Red evidently was both popular and cheap. Most of the interior was painted in a more or less ruby color. This stationary probably originates from 16th century. 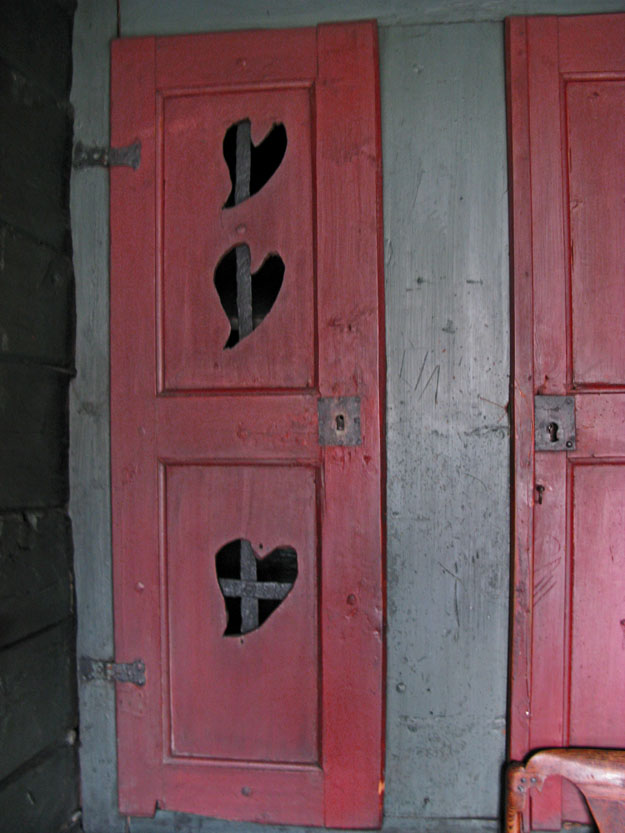 One wonders, what's behind the locked and barred red door? The modern hearts evidently are there for air supply. The design obviously are some four hundred years old. 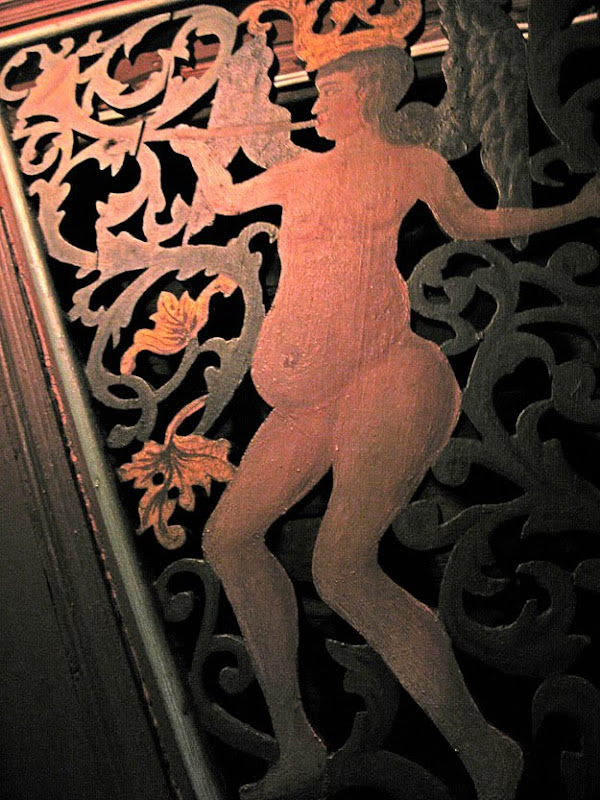 The young Hanseatic' dreams were more realistic concerning the natural female body, than those of today. No lipo suctions nor breast implants. Even so, the maiden of their dreams were so far away.

That was very interesting !!!!

felisol, thanks you for this tour of the Hansa Museum. We studied all about the Hanseatic League in High School! Imagine that! I'm amazed they used so much RED! Happy Ruby Tuesday! :)

I enjoyed your humorous words, Felisol. You made me smile. Actually, I giggled. ;-)

So they locked the young Germans in at night. But I bet the older ones were foot-loose and fancy free.

I would get claustrophobic sleeping in one of those beds. No thanks.

True beauty is not the externals, it comes from within. In those days, the human form itself was considered graceful and beautiful without enhancement...Red seems to be a classic color, the simple paints and pigment obviously must have been easier to make, especially on Tuesdays of that era...

Realistic dreams indeed :-) and thank you for guiding me around in the world of Die Gesellen. P.S. Yes, you're correct : ontmoeten = meeting (the mice meet, friends meet), the two cups with train rails are an ad for travelling by train, and it's shot in a train station.

Hi Felisol, this is a real neat post. As you know we want so badly to come to Norway to visit.
I did learn a lot about that museum. Is it one we should be seeing? I.e, how famous is it?
..
..

Ok that's just spooky... would or must have been a torture chamber, kind of like my house lol
Happy RT very interesting post.
Love Claudie
xo

Wonderful tour of the museum! To think that hearts (so popular in decor a few years ago) were decor four centuries ago too.

Oh yes Felisol, this is a cheery Ruby Tuesday.

I love museums, history interests me a lot. We can learn a lot from our past and build upon it.

Poor guys who got locked up in their beds.....must be so claustrophobic

what an interesting post! the locked beds and the woman's natural body made me giggle. and the doors with cut-out hearts--really cool!

Wish they'd had those lockable bed things around back when we had teenagers in the house!

This is why I love your posts - you always have wonderful stories and anecdotes to bring the images to life, like the way the apprentices were actually locked into their beds.

dear felisol...
oh what a great ruby post.
i find this so interesting and i think when i get home from taking mom golden out that i will have to read it again more slowly and look intently at these lovely pictures and then google "the first euopean trade organization"..
oh why when i was a student didn't i study harder?
this is so interesting!!..love terry

god bless you my bestest friend

Hello dear Felisol! I so enjoyed stopping by today and browsing through the "Hansa Museum" with you. Imagine being locked in your bed at night!:-) I never heard of such a thing but it made me smile. Like Amrita said, it must have been so claustrophic:-)

It would be so nice to visit Norway. Not sure we could ever do that but at least I can learn and enjoy Norway through you, dear friend. Your posts delight me. God bless you, sister across the sea!

Alas, I am Ruebenesque Gal trapped in a Hollywood world! Those folks got it right!

Locked in their beds?! Wow, I had thought about doing that when my kids were small and they'd get up 104 times a night just to awaken me from my much needed sleep!
Connie

Behind the red doors
lie centuries-old secrets—
who can discern them?

Excellent ruby post, Felisol! I truly enjoyed learning about and gazing at what you had to offer. I love the paining of the woman. As you know from visits to the pagan sphinx, I post art nudes on Friday nights!

Wow! Fascinating about the locked-in apprentices Felisol!...and so obvious that questions must be asked by those like me - what about the toilet, or if you felt sick.Wonder if they had to call out, or had some means of dealing with that.So fascinated I showed my husband this - he grinned from ear to ear. Maybe he had a few appretice friends in his young days!! It is funny, if not strange!

Dear Felisol,
This is such an interesting historical writeup of the Hansa Museum.

The pictures are so clear, and I appreciate your captions under the pictures as coming from the very person who took the photographs!

Thank you for visiting my blog and your kind and warm comments on my last post.

It has not been easy for me upon my arriving back home.

If you have a bit of time, I invite you to re-read the last part of that Sept 30 post. I have re written it and shared more of what I am personally going through.

I will surely appreciate your prayers at this time.

Thank you for the comfort of your words, and GOd's words as well. WOuld you believe, my daughter and I read those words from Scripture last night.

May God bless and keep you.

I agree with patti. Don't lock me in a small space. Thanks for an intresting history lesson.

What an interesting place! One day perhaps i will come to visit and you must show me all these lovely places!

We need a scarf sisters reunion in Norway to visit the old haunts, take hikes, and visit churches and museums ... but until then, your humble friend will be ever so happy to sit at your feet and read another adventure of what might have been in days of yore.

Felisol...I love reading about the history of your beautiful Country!
Such great photo's for your Ruby Red Post!

I like the red door with the hearts. The post is quite interestingly informative. my RT is up too.