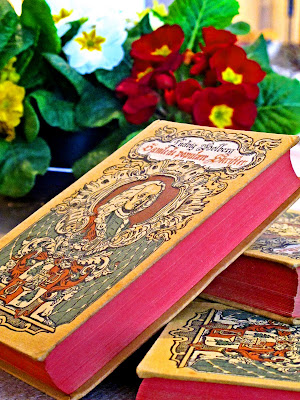 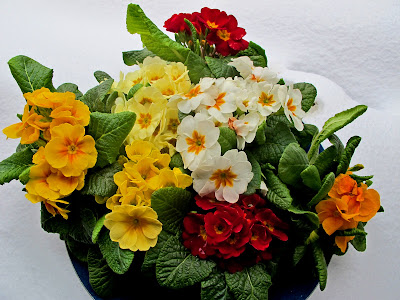 Every season has it's flowers, also at the florist's. Primroses are flooding in January. Last week they were two for 2,5 dollars. I bought eight,- food for my soul. 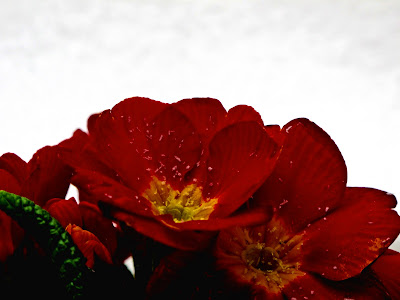 For the sake of Ruby Tuesday I placed them on terrace while the powder snowflakes were dancing from the white sky. 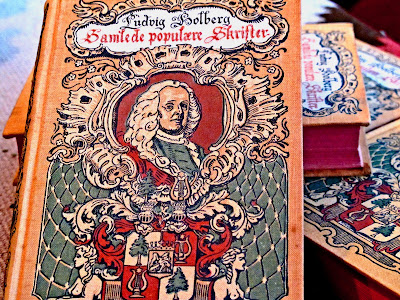 The author Ludvig Holberg (double click to read more) was born in Bergen in 1684, a child of the era of Enlightenment and the baroque. His plays, mostly comedies and satires, are well known, performed and loved even in the new millennium.
His most famous role figure, Jeppe, has a drinking problem. Holberg described Jeppe's dilemma in two sentences ; "Everybody's talking about Jeppe's drinking, but nobody's talking about why he's drinking."
This quote has helped people asking the important "why," searching for an underlying cause instead of condemning.
I think those few words alone have made us a more tolerant people.

Such nice reds for Ruby Tuesday. Those flowers are sure signs of spring on the horizon!

Beautiful flowers!
I love that first shot of the flowers and the red spine of the book - creative shot!
A quote to think about. :)

I love to buy primroses in winter too, then plant them in my shade garden so they bloom the next year. But I haven't seen any yet! Pretty soon they will be in the shops. Yours are very lovely. I like the mixture of colours.

By the way, I have read about 900 pages of the Ken Follett book. I have only the last section yet to read. I'm glad I followed your suggestion! ;-)

That's a great challenge to ask the why instead of going straight to condemnation. Love all your rubies!

The snow, cold and gray of Winter call for a colorful and attractive distraction. These primroses fill the bill very nicely! Indeed, we do need to understand 'why' for everything: To improve or make better. It is easy for us to criticize others without looking at ourselves and our faults, first.

Two hours of daylight? I'll never complain about the lack of daylight again!

I agree many people do that though. The flowers makes the white snow not so boring ^_^

OK, so you got me thinking about Jeppe's drinkin...

Lovely flowers, against the snow or anywhere.

I been seeinng flowers lately, I would be glad to welcome spring..

Just thought l would let you know that Valentines day is on Feb 14. love your imagesxxsaw your comment about noth knowing the date.xlynda

Beautiful primroses! They don't grow here in our country, but I have seen them in Chiang Mai, Thailand where very many beautiful flowers grow.

The author you featured is someone I never heard of before. But he says it well, we can be more tolerant and understanding if we know the why behind someone's seeming wrong actions.

Your blog post for today is once again food for my soul as well.

dear felisol...the prim roses are so beautiful but even more beautiful are the words spoken by
mr. holberg!
he is so right. once i was at a bible conference and in between meetings, some of us were walking around the small town and a drunk man approached us and some, but not all of the group i was with started to make fun of him..it almost broke my heart for the poor fellow..i just went up to him and said hi and he said hi back and smiled and then he went on his way.
i wished that i had of had a little bible tract to give to him but i am sure that god had his eye on that man and he would tell him soon about his precious son who died for his sins.
after all felisol, even though some of us were never drunkards, how many more sins did we commit?

Luke 15:2
And the Pharisees and scribes murmured, saying, This man receiveth sinners, and eateth with them.

thanks for such a good ruby tuesday post felisol.
jesus hates the sin but he loves the sinner and died for every last one of us!....love terry

Those are gorgeous flowers.

Nice shots! I did flowers as well, though in a greenhouse.

You beautifully display that intriguing set of books.

As to the question "Why", I've heard it said that to understand all is to forgive all.

what a nice series of lovely flowers! perfect for RT :)


u may view mine here

love those flowers, they sure will light up any room. That book looks quite interesting! Happy RT!

i love all the reds in your photos..most especially the macro shot of the red flowers

The primroses are very very beautiful, they must bring color and warmth to you and also the promise of spring.Snow like white powder - wow sounds very preety to me.

Its true many people are driven to drink to escape their sorrows. Its a sad senario.

I seriously like this book. I missed Ruby Tuesday this week. Inspiration totally folded on me. Alas.

Beautiful Reds! I love your snow angel pic in next post !
Blessings,
~Myrna

I love the primroses, Felisol. A sign of hope, of springtime..I saw them at the supermarket the other day, and was tempted to buy them, but I didn't. :-(

Interesting quotation you've shared. There is always a reason why people drink too much, or eat too much. We should not judge so quickly.

There is always a "why"
and always the opportunity to bless instead of curse.......but for the Grace of God.....