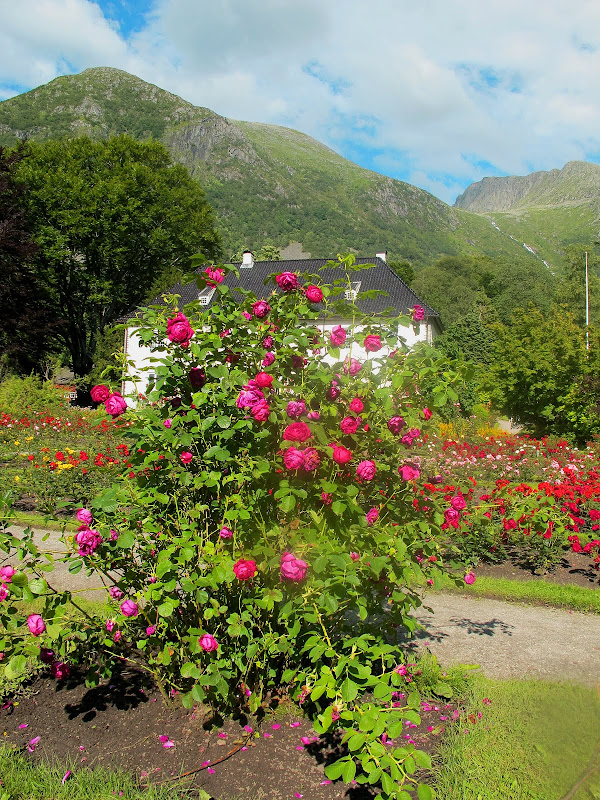 The Barony of Rosendal with its famous renaissance maze rose garden. 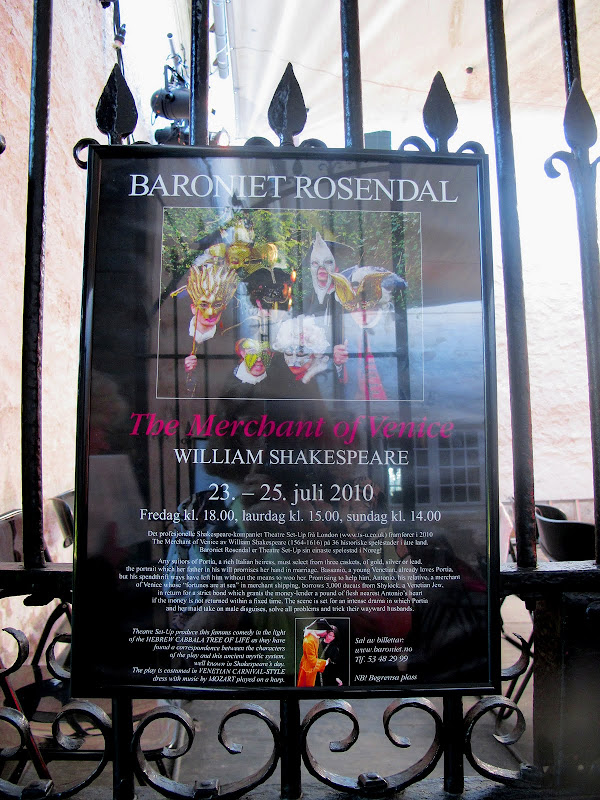 Friday Gunnar, Serina and I drove for four hours to see the play The Merchant of Venice performed by English actors at the Barony of Rosendal (Rose-valley).The anti-hero of the play, Shylock, have much in common with Leopold Bloom, both Jews, fighting for their right to be accepted by society. 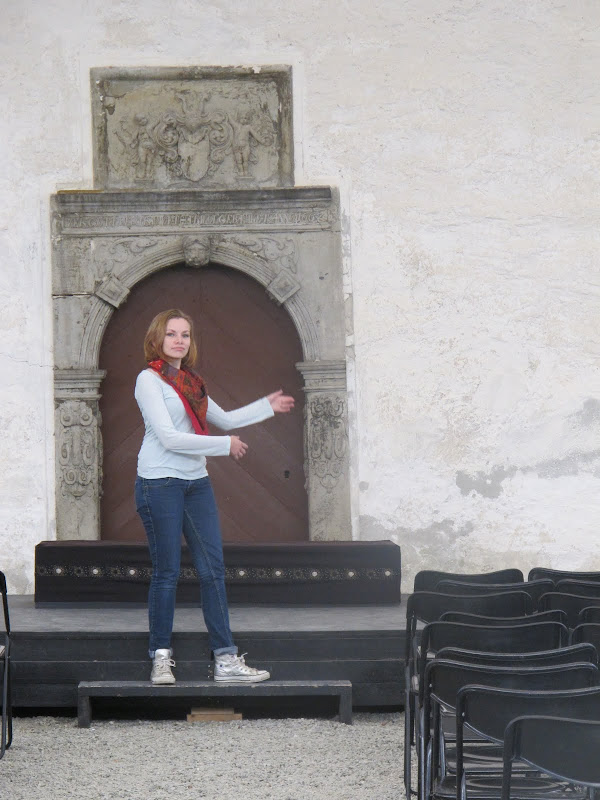 "All the world's a stage,
And all the men and women merely players;
They have their exits and their entrances;
And one man in his time plays many parts,
His acts being seven ages. At first the infant,
Mewling and puking in the nurse's arms;
And then the whining school-boy, with his satchel
And shining morning face, creeping like snail
Unwillingly to school. And then the lover,
Sighing like furnace, with a woeful ballad
Made to his mistress' eyebrow. Then a soldier,
Full of strange oaths, and bearded like the pard,
Jealous in honour, sudden and quick in quarrel,
Seeking the bubble reputation
Even in the cannon's mouth. And then the justice,
In fair round belly with good capon lin'd,
With eyes severe and beard of formal cut,
Full of wise saws and modern instances;
And so he plays his part. The sixth age shifts
Into the lean and slipper'd pantaloon,
With spectacles on nose and pouch on side;
His youthful hose, well sav'd, a world too wide
For his shrunk shank; and his big manly voice,
Turning again toward childish treble, pipes
And whistles in his sound. Last scene of all,
That ends this strange eventful history,
Is second childishness and mere oblivion;
Sans teeth, sans eyes, sans taste, sans everything." — Jaques (Act II, Scene VII, lines 139-166) William Shakespeare 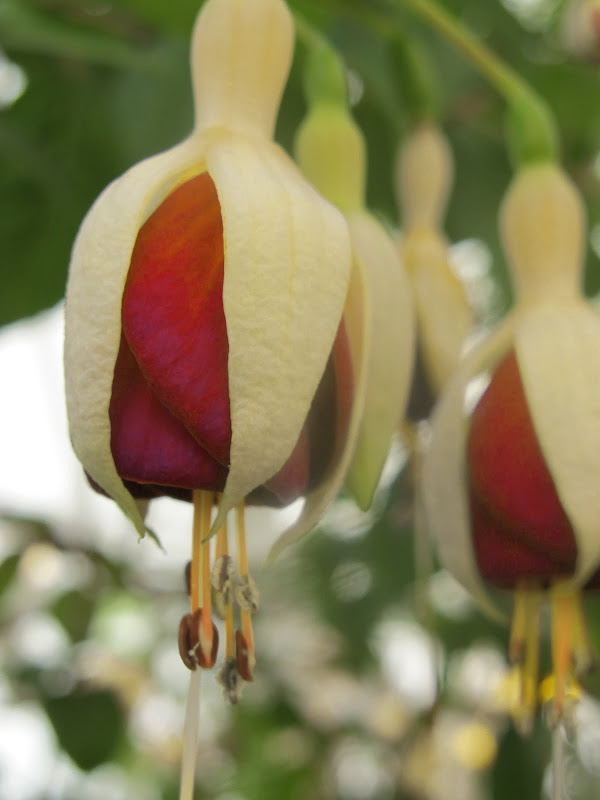 The fuchsia is called "Drop of Christ's blood" in Norwegian.I'll never forget the huge fuchsia hedges of Ireland.

"In a famous episode of Homer's Odyssey the hero Odysseus encounters the Cyclops Polyphemus , the son of Poseidon and a nereid, who lives with his fellow Cyclopes in a distant country." So far Wikipedia.
The one eyed giant, the cyclops Polyphemus held Odysseus and his crew prisoner in a cave.He threatened to kill and eat our hero, but was blinded by a burning pole, our cunning hero Odysseus brilliantly overpowering the enemy.

Leopold Bloom had to stand up against the "one eyed", meaning shallow, narrow sighted and judgmental citizen, in the bar. While the cyclops cast rocks after the fleeing Odysseus, the citizen threw an empty biscuit box after Bloom, as he made a narrow escape from the bar. 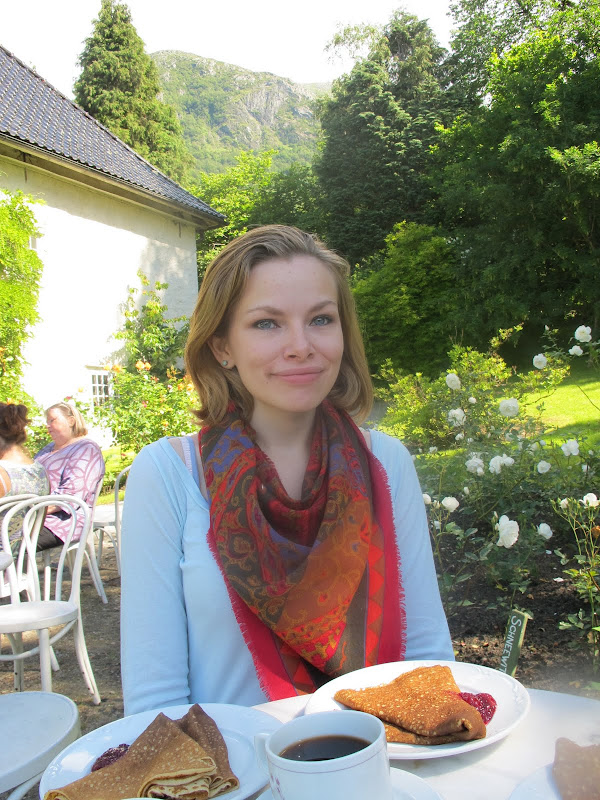 .The Cyclops ate in a cave. Leopold Bloom was in Barney Kiernan's pub.
We had coffee and pancakes in the rose-garden on Saturday, day after the play. 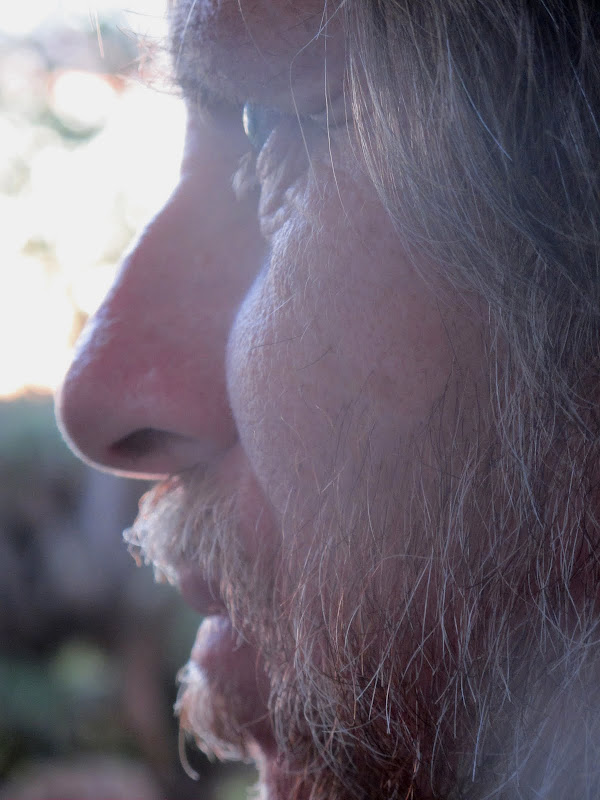 Gunnar, reddened by the sunset, will have to pose for Shylock/Bloom

"Mendelssohn was a Jew and Karl Marx and Mercadante and Spinoza. And the Saviour was a Jew and his father was a Jew. Your God.
-- Whose God? says the citizen.
-- Well, his uncle was a Jew, says he. Your God was a Jew. Christ was a Jew like me." Leopold Bloom finally lost his temper after being bullied for a long time by the citizen and his drinking buddies. (James Joyce) 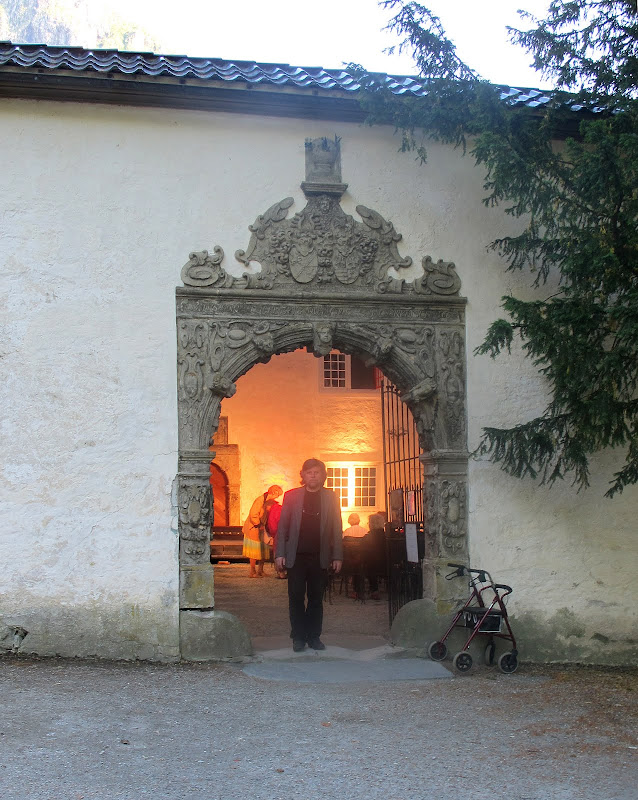 Gunnar outside the courtyard where the play was performed.Ruby behind.

"SHYLOCK To bait fish withal: if it will feed nothing else,
it will feed my revenge. He hath disgraced me, and
hindered me half a million; laughed at my losses,
mocked at my gains, scorned my nation, thwarted my
bargains, cooled my friends, heated mine
enemies; and what's his reason? I am a Jew. Hath
not a Jew eyes? hath not a Jew hands, organs,
dimensions, senses, affections, passions? fed with
the same food, hurt with the same weapons, subject
to the same diseases, healed by the same means,
warmed and cooled by the same winter and summer, as
a Christian is? If you prick us, do we not bleed?
if you tickle us, do we not laugh? if you poison
us, do we not die? and if you wrong us, shall we not
revenge? If we are like you in the rest, we will
resemble you in that. " William Shakespeare . 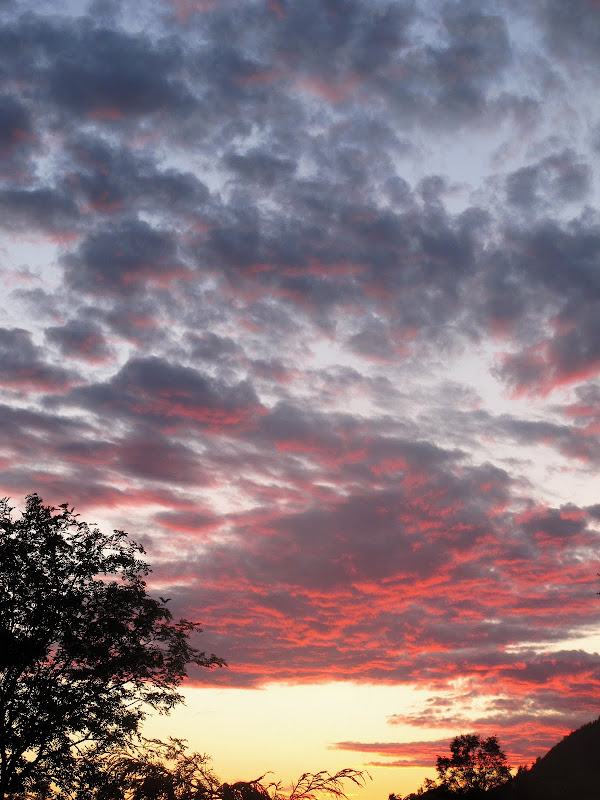 The Cyclops chapter is taking place between 5 p.m. and 8p.m.in Dublin, June 16th 1904. Perhaps a little early for sundown?
Nevertheless; while Bloom is trapped in the bar/cave, his rival, Boylan is seducing Bloom's wife Molly. (At the same time in Venice, Shylock's daughter Jessica is steeling her father's belongings and fleeing away with Lorenzo to convert to Christianity). 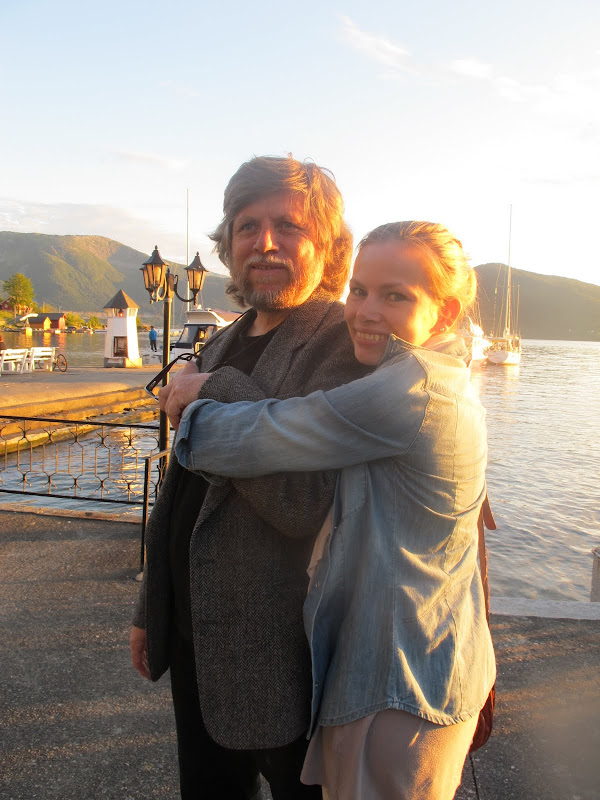 Like Odysseus on his way to the harbor, Gunnar is posing at the quay of our hotel. Serina being the cyclops trying to stop him from getting on board in his boat. The sundown gives them their golden color. 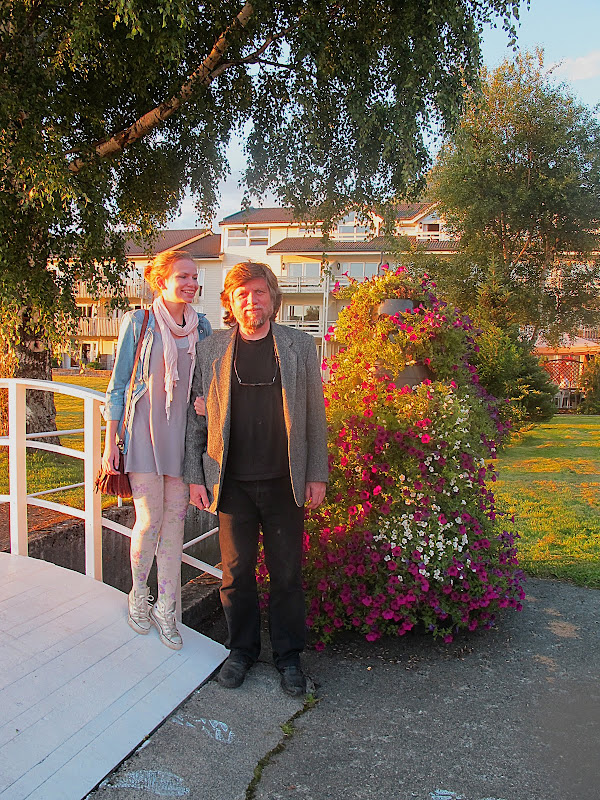 Dear Felisol, this is an excelent post embelished with your enchanting, prose, poetry and photos.

Merchant of Venice is one my favourite plays. In college we had to memorize certain speeches and act them out too.

The Rose Garden is such a charming placxe with its theater, tea shop and flowers. I love the entrance of the courtyard, has A a Venetian feel about it doesn 't it? With Serina, the modern Portia enjoying her evening repast.

I laughed that you decided to give Gunnar the role of Shylock/Bloom.

Your top photo of the rose garden with the mountains is stunning.

I took out a biography of James Joyce - I got halfway through. I learned a lot about James and Nora! Meanwhile, I am absorbed in a book on Irish history. All because you are blogging about Ulysses...

Your photos are wonderful! Thank you for sharing them with us.

Thanks for the tour. I enjoyed viewing your pictures. Loved the roses.

Lovely photos. I love the roses and fuschias.

i just love your pictures ... each one is a story ... so beautiful!

Such an excellent post - beautiful images & so informative too!

Always a joy to visit your blog!

Your photos are so amazing Felisol!

I tried to pay attention to every word, but once I saw Serina with Norwegian pancakes and lingonberries?? - I lost my train of thought!! That is one of our most favorite things to eat!!

Just beautiful, I always enjoy every photo you post!

Love Shakespeare! How I would have really enjoyed an outdoor performance like this! A very interesting post and a beautiful series of photos!

Oh dear Felisol,
I have purposely waited for a chunk of time when I can read your latest post about your readings.

And now, as I savor your newest blog entry, what a delight it is to find out you have linked and blended Homer's Odyssey, Leopold Bloom's episodes as penned by James Joyce, and Shakespeare's Merchant of Venice.

I am enthralled as you weave your words with your photographs.

"The Cyclops ate in a cave. Leopold Bloom was in Barney Kiernan's pub.
We had coffee and pancakes in the rose-garden on Saturday, day after the play."

And the shot of Gunnar being compared to Shylock the Jew.

And the beautiful Serina, indeed a lovely rose of Norwegian summer in that lovely setting.

And the evening sky, giving your two beloved ones that golden glow... I could go on and on and on...

You are indeed a gift to me dear Felisol.

your pics are captivating. the rose garden and the sky are incredibly gorgeous.

Beautiful place for a beautiful family.

I love the way you have interwoven Shakespeare, Joyce and life. And your photos - as always - are exquisite. Looks like a wonderful spot. Your daughter gets prettier all the time, I think.

Thanks for your kind words at Raven's Nest.

What a magical post mixing past and present and all enhanced by lovely reds everywhere.

E - I just started reading Stieg Larsson's "The Girl with the Dragon Tattoo". Fantastic book. It just sucks you in and then before you know it, you are in too deep and you don't want to do anything except read the book.

I would have loved to see the play. I do like the picture of the doorway into the courtyard. Of course, cousin Gunnar adds to the picture. :)

Bold Odysseus
gouged out the great Cyclops’ eye
with a fiery brand.

You take the loveliest photographs. and your family is beautiful as well. that Rose Garden is gorgeous! and look at the fuchsia...I love that flower...here we even have one that is bright pink and deep purple....

Your daughter and husband are such great sport, Felisol!

I had company this week so I am no further along in Ulysses. I think I need to go back and reread some of it. :)

Regarding your comment on my blog:
Sorry your dictionary doesn't tell you what a glider is. It's an old term because it's an old piece of outdoor furniture - maybe even an antique - although I think you can still buy them at specialty places.

When you sit in a glider, you can make it move back and forth by pushing with you feet. :)

I saw The Merchant of Venice years ago. I went as a chaperone, on a field trip with my daughters class to Wayne State Universities Theatre.
Some of the performers that we saw live back then, are now in shows on television!
Love the roses, the sunlight but mostly your beautiful family!
As always, your photo's are breathtaking my friend!
Hugs,
trish

That must have been amazing to travel to Rosendal to see the play! I would have loved that!:)
Your daughter is truly beautiful.
I enjoyed this entry so much!