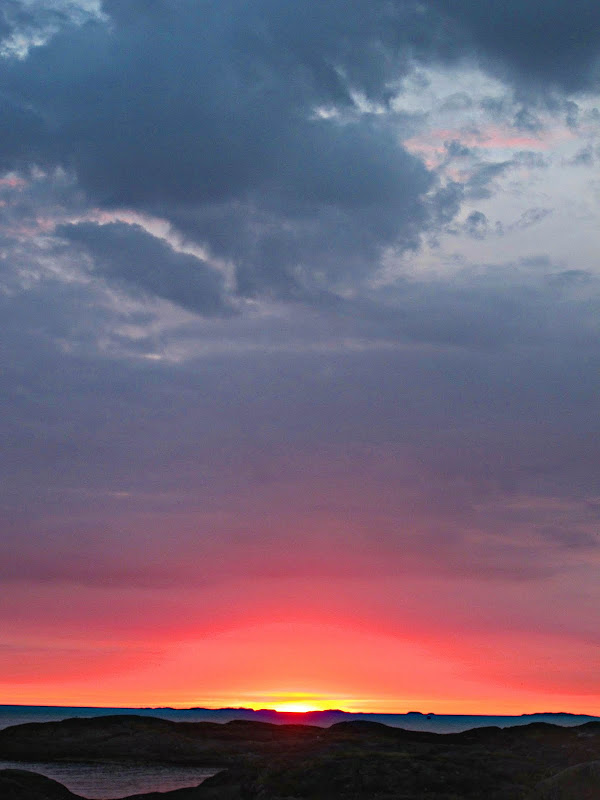 "A Home Rule Sun is rising in North - West", Joyce quotes.Here; our sun is sinking in the north west four days ago. Red sunset, morning wet, the saying goes. Turned out to be perfectly true.

According to Homer (and the Wikipedia), Odysseus had to pass a cliff with two singing sirens on his way back to Ithaca. "Odysseus was curious as to what the Sirens sounded like, so, on Circe's advice, he had all his sailors plug their ears with beeswax and tie him to the mast. He ordered his men to leave him tied to the mast, no matter how much he would beg. When he heard their beautiful song he ordered the sailors to untie him but they bound him tighter."

The Sirens of Leopold Bloom's Odyssey were called Miss Kennedy and Miss Douce. They earned their living as barmaids at the Ormond Hotel.
The Siren chapter is a feast to the ears.
Including alliteration, end rhymes, vocal rhythms and bits and pieces from known folk songs; it's a complete modern musicals.
Joyce managed to put a few more gray on my head by his "Bronze by Gold"play on words.
Bronzelydia by Minagold.
He's simply referring to the two ladies' hair color, in his special twisting and turning poetry. 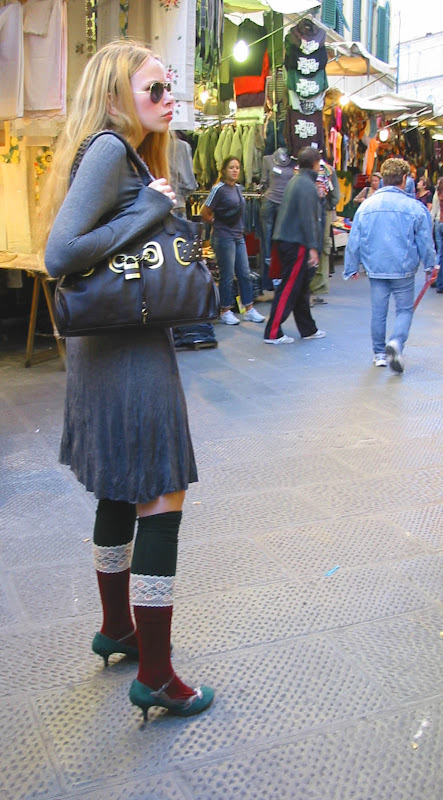 Serina in both bronze and gold at the San Lorenzo market, Florence. Her red socks sadly disappeared on our way home, 4 years ago.

Bloom's rival, Boylan, is entertaining both friends and the Sirens, by making them sing along melodies from the popular opera Martha. 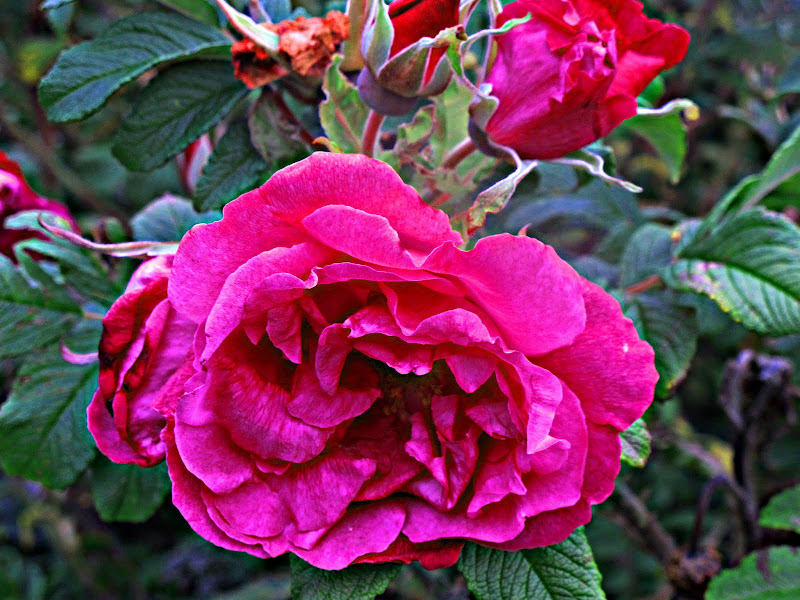 "Bronzedouce, communing with her rose that sank and rose, sought Blazes Boylan's flower and eyes."James Joyce
Picture:Rose by midnight, caught in red sundown four days ago.

Meanwhile Leopold Bloom , lost and bewildered, is shut off from the merry party in the dining room at the same hotel.
Very aware of Boylan's whereabouts and evil intentions to seduce his wife,
Mr. Bloom finally realize that he loves and wants his wife Molly.
Even so, he finishes writing a letter to Martha, the woman he just might want to have an affair with.

Being a firm believer in the value of happy endings, I still haven't given up hoping. I'm after all only halfway through the novel.

plus more snippets from the book and its comparison to Homer's Odyssey...

everything put together makes such delightful reading!

I think it will be a happy ending.

Hi Felisol, I hope I don't have to take a quiz on your lecture. It was good though!

Happy RT! Being in London I am early for it too. I will sign Mr. Linky tonight if I am still up.
..

Oh my goodness. Sounds like Bloom has some major choices to make. I am enjoying your posts. Now that I have begun reading Ulysses (I'm less than one-sixth of the way through) I will go and read what you've said about the part I have read.

what a gorgeous sunset felisol!
unfortunately, we haven't seen a manitoba sunset yet because of where we are situated...campers are hiding the western sky and we are in the valley are so it is blocked out!
the sun goes down about nine thirty here.
wednesday we will be staying out in the country with people that used to live next door to us when we lived on the base. it is so great that after 44 years that we are still friends.
maybe then we will catch a sunset!

where on earth did those pretty red socks of the princess disappear to felisol?
what a loss, eh?
well i better say so long before the interent power goes.
i can really understand now when that happens to our amrita!
take care felisol...did you get my email?
happy ruby tuesday...love terry

The sunrise, Serina and rose are lovely rubies! From bold in the sun and flower to subtle in your daughter's cheeks, ruby abounds and is so beautiful!

Felisol, I am enjoying your literary lessons juxtaposed with wonderful photography.

The sunset has such depth both in the sky and sea.
My goodness the Snow Princess is dressed fashionabley for summer. I am admiring her shoes
and bag specially.

At a time when our roses are not doing wel, its good to enjoy yours.


Just like Qdysseus the 'siren ' of our souls beckon us with their attractive, lusty singing. The spiritual lesson I want to draw from here is that we have to tie ourseleves to our mast- the Cross of Christ and plug our ears with the Word of God to escape the snares.

Did you use a paint brush and paint the sky pink? Great Job. LOL

The sky photo is fantastic! Thanks for sharing.

Oh wow, you're photos are wonderful.

Dear Ann,
I did definitely not use any brush at all.
The very special sun down took part last week about 11 a.m.
No midnight sun here, but almost.
A dark, cloudy sky and an opening in the cloud layers just above the ocean gave a long lasting, wonderful effect.
I read in the paper the day after, that a rare halo was seen around the sun that day.
I was just lucky to be outdoors while this happened.

P.S. My hubby says the ring from the sun may be a lens effect.
I use a Powershot G11, but have never had a similar experience before.
Still, hubby knows best.

Hello Felisol, Your red sunset is beautiful. We have quite a bit of rain here in the US Northwest, but our sunsets are not as pretty as your. take care. Ivon

I like the flowers, they look lovely, the pictures are so crisp...

these are wonderful photos :)

u may view mine here

The sunset is gorgeous. And the red socks are pretty snappy!

A delight to see and read your recap of Ulysses #13. Such great photos!

Oh, Felisol...that is the most beautiful sunset i have ever seen!
As always, your Serina is beautiful! Too bad about her socks disappearing for she looks so cute and stylish in them.
Big hugs,
trish

Felisol, your pictures are so beautiful they really stir the soul! I especially love the first one, it took my breath away! What a world we live in!

My favorite though is that of Serina, she is beautiful and has a wonderful sense of style! What a beauty! I bet she had many admiring glances at the market that day.:)

Have a wonderful day and God bless!

As always, your pictutes dazzle... especially Serina!! The socks are too cute for words... she is a beauty!

I love the San Lorenzo market, fun memories from me too.

Thanks so much for your good wishes and prayers on our school issue. Unfortunately it's a fight we can't win and were only able to cut our losses and do what we beleive will cause the least amount of damage to our children.

It will all work out alright, eventually, but it certainly wasn't for the best.

Dear Robin,
Fights against power are hard to win in short term.
I think and hope that your way of fighting for the best of your children, may have been seeds which will reap and be for the benefit of less fortunate children.

Sadly when it comes to our own children, changes must happen swiftly.
One "lost" school year is a tragedy for the child concerned.

I'm sure you did the right thing for the best reasons.
Looking back, I feel convinced that your battle was not in vain.
Your children will know they have parents who stand up for them, when it's needed.
Best security you can offer them.
From Felisol

I'm doing some catching up Elise. Since retiring, my entire relationship with my blog and the blogs of others has undergone a transformation. I visit around a lot but hardly ever say anything. Then I realize that my quiet just get ME quiet. Oy! What's a girl to do. Well, comment, of course.

As I read your account of the musicality of the Siren chapter, I wish very much that I still had my copy of Ulysses. It's been so long since I read it. I think I need to find one.

In the meantime, I just picked up Stieg Larsson's "The Girl With the Dragon Tattoo". Have you read this yet?

Dear Annie,
nice hearing from you.
Always nice.
Yes, I read the three of Stieg Larsson's novels a couple of years ago.
They're great, among the very best.
So sad his life should end so abrupt, just as he was standing on the threshold of his success.