Ever seen Sig Hansen in The Deadliest Catch? He's from "our" island, Karmøy, and he's talking the local dialect fluently,even though he himself is born in Seattle. This March day the hiker girls were on a excursion to the most unfriendly, but oh, so impressing parts of the island, called Ferkingstad.
I'm sure you can understand that fishermen coming from these waters are skilled sailors. 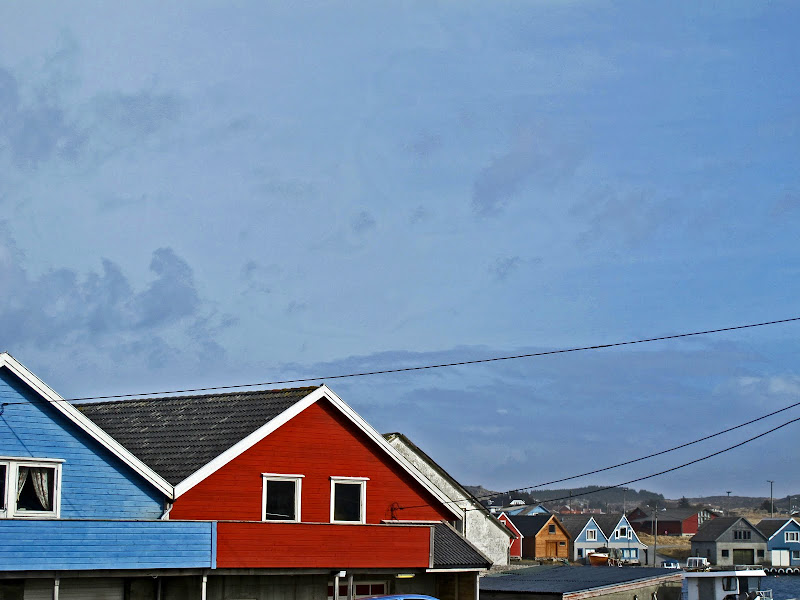 Ferkingstad harbor has a long mole to prevent the seahouses and boats
from being blown into the sea when the winter storms are at their worst. 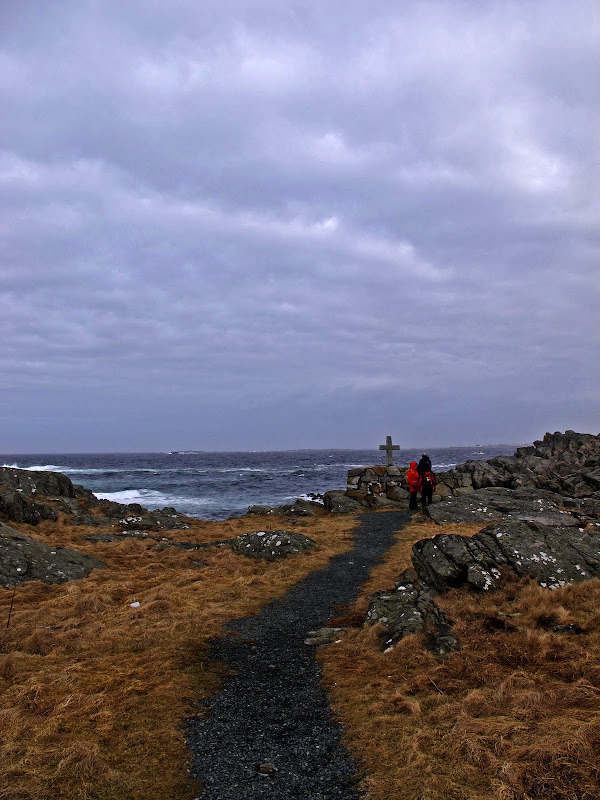 The hiker ladies out to visit the memorial erected by Norwegian/American sailors and fishermen. So many from this island have found a wet grave in American waters. 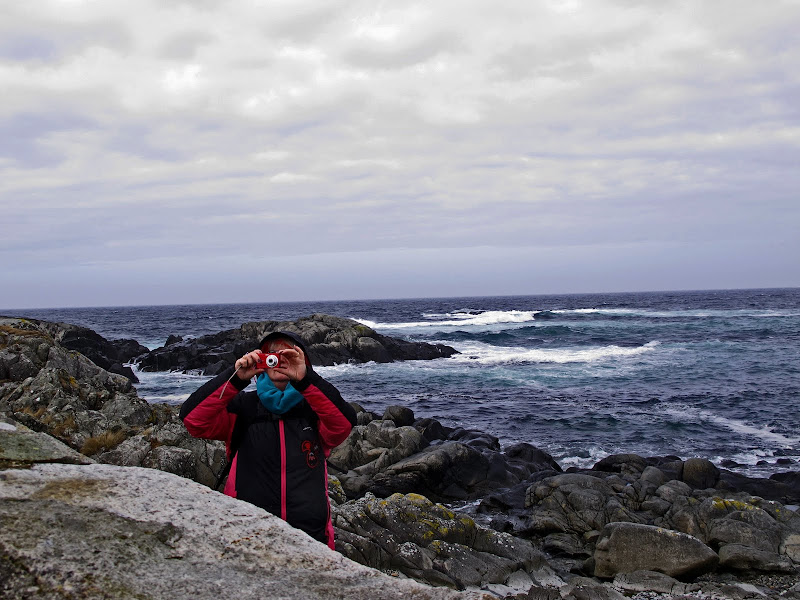 Torill keeping her balance while shooting. Notice the sky. The weather is changing all the time here on the shore of the island. 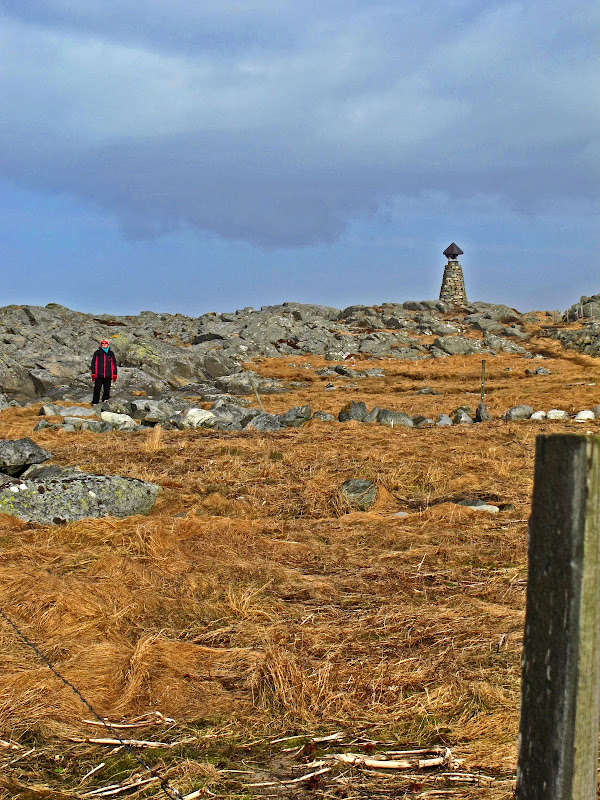 Another part of the seaman's memorial. A bell house in the stony landscape. There are two old ship-house sites dated back to the viking area.
The wild landscape is protested from developers.
The big stones have been here since the ice withdrew the end of last Ice Age 10 000 years ago- 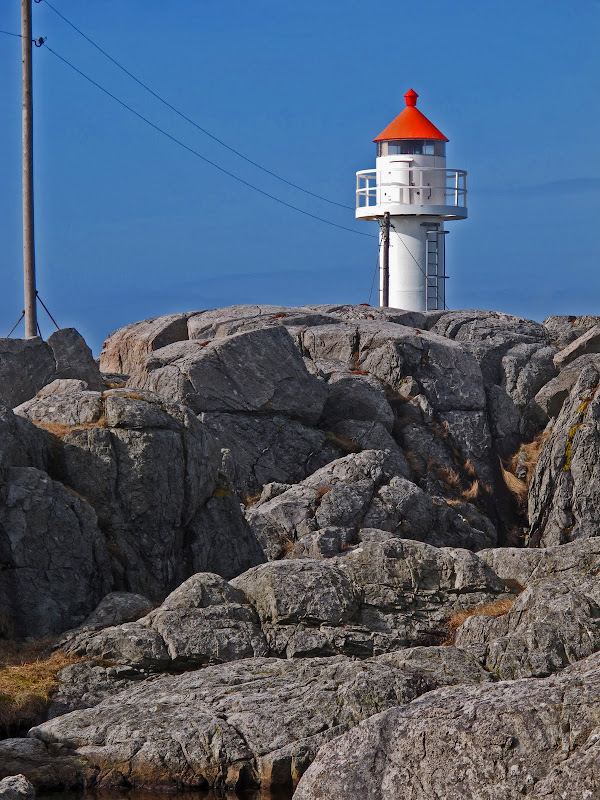 The small lighthouse is almost impossible to enter, situated at the utmost edge of the mainland, surrounded by boulders. 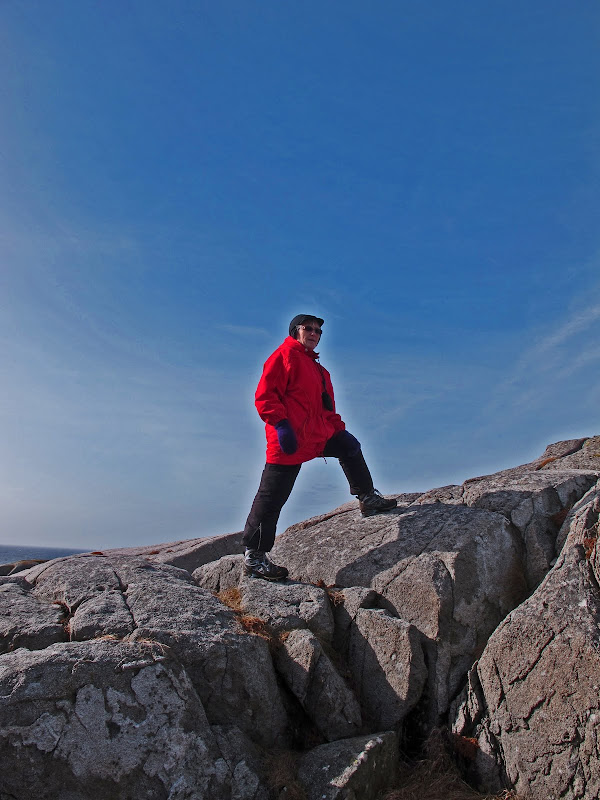 Liv is giving it a go. 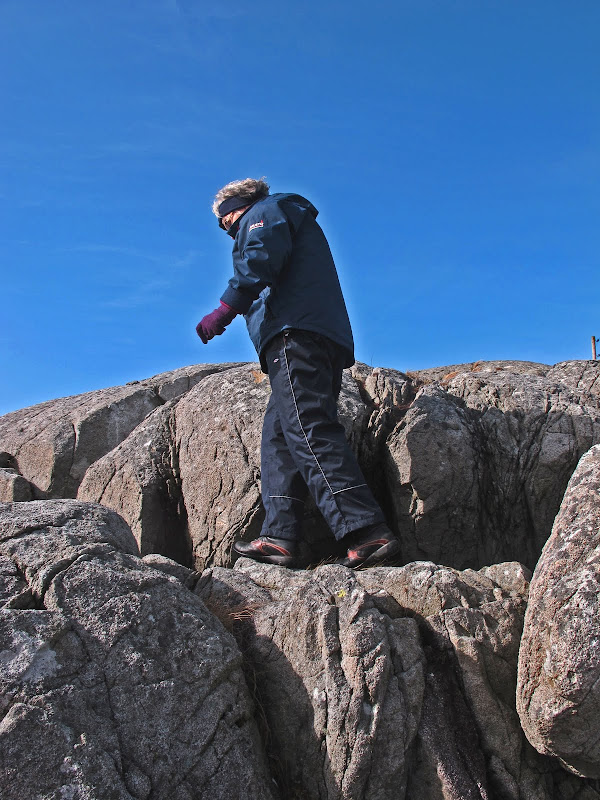 Tilly is a clever mountain goat as well. 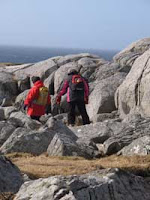 Hello Felisol,
This really is a rugged coast. The photos are beautiful. I have watched Deadliest Catch and I know that's a occupation I am not rugged enough for. You had a lovely hike with your friends...

All the photos have such wonderful compositions, with the blue sky and the bits of red.

Dear Leora.
Only the stone foundations are left from the two boathouses.
You can see some of it on picture #4.
I took even more pictures of the foundations and a poster information about it, but it was only written in Norwegian.
Clearly one doesn't think other visitors can go that far.
Stupid, eh?

The rugged rocks and gray sky gives this shore the look of an almost forbidding place. Yet, there is a beauty here, the look of God's grand design. The fishing has led to the end of many a sailor in the choppy waters-the sea though is so bountiful. The town has survived the weather, and its inhabitants have the urge to go on a catch again and again. Stunning beauty on a rough shore...

Hello Felisol, this seems like an enjoyable hike with your friends. I am sure you had your coffee flask and sandwiches with you.

The sea, rocks, shy and buildings all present attractive spectacle. I like the ruggedness of the shoreline with the lighthouse and houses. You live in a beautiful place.

Fascinating and great photos, but without your commentary they would not nearly reach the understanding you gave us. Thank you.

What a spiritual place to visit!

What a wild, rugged, wonderful place!
It is so exciting to see your photographs. You Hiker Girls rock!

The photos are fabulous! Your country is so extraordinarilly beautiful! Looks like a great day for a hike.

This looks like a wild and rugged place - perfect for a hiking adventure! A fascinating series of photos!

The bits of red come out great against the blue sky. Your photos are beautiful.

Great photos Felisol. It looks to be an amazing outing with the Hiker Ladies! I bet you all worked up an appetite, eh?

dear felisol...i have always been afraid of the sea and even these pictures scare me!...maybe when i see your sea though with your family and bernie at my side, then i will lose my fear.
for many years now this poem has remained in my mind;

It took the sea an hour one night,
An hour of storm to place
The sculpture of these granite seams
Upon a woman's face."

i know that the lord is the master of the sea but even peter was afraid of it, i think, until the lord jesus took him by the hand!

Wow it really looks like that part of the island is rough. I only wonder how they put up that lighthouse the rocks are huge!! Happy Tuesday!

It must have been love

Dear felisol...what beautiful scenery your norway provides. I so enjoy your History lessons and times with the hiker girls!
Yes, we have watched The deadliest Catch....now everytime I see Sig I will think of you!

Love the reds. The coast is beautiful. The colors and composition of each shot is right on.

What a starkly beautiful area for a hike. I can see how it raises tough young men and women.

Gorgeous and rugged landscape. How brave of your friends to try hiking up to the lighthouse. :) Nice having girlfriends to explore with!