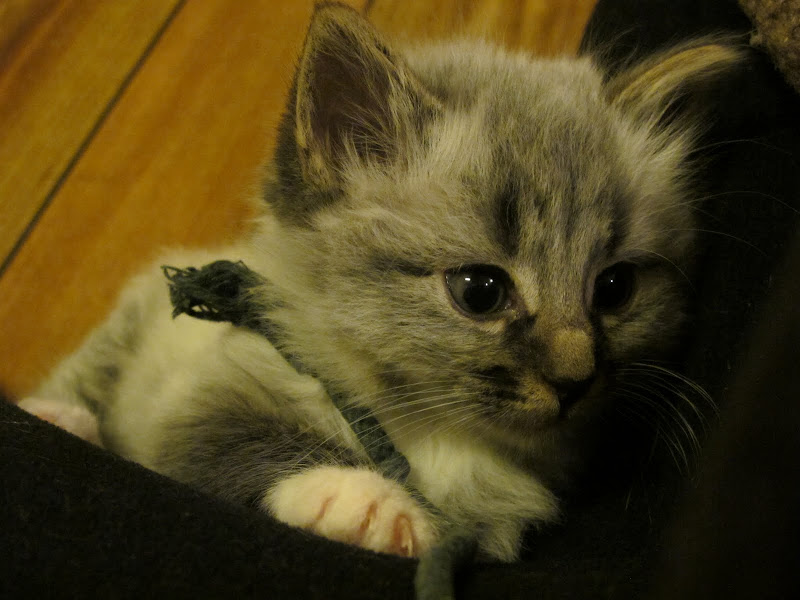 All these days coming and going. Little did I realize they were life itself.
I didn't get to see excepts from the English Royal Wedding till 12 hours after it was all over.
My mother, being an if not royalist, so at least Dianalist, gave me a thorough summary at about 8 this afternoon.
She also told me she had been finishing the fertilizing in her garden, so I had hurry out, trying not to fall to far behind. She is my rolemodel and inspirer.

This morning I had my weekly appointment with the physiotherapist. She is a genius and I always return renewed home from an hour of exercises.
Meanwhile Gunnar had to bring our precious cat, Amidala, (named by Serina) to the vet. Being busy mothering 5 kittens, she still managed to get a new vower , ran off a couple of times and had to be spayed in a hurry.
She's been doing fine afterwards. Eating penicillin and even doing a few walks in the garden with her abdomen all bandaged.
She is some queen to us.

In three days we have given away all the kittens, now eight weeks, to three wonderful families. I prayed for this from the day they were born. We have gotten used to meeting with six cats each morning, and it's been a busy time, especially for Gunnar. He has managed to get them house trained and eating food and behaving like..well kittens all day long.
They were used to sleeping close to each other, and we therefore were extremely happy that two of the families chose to take to kittens each. They were all experienced "cat people". The fifth came to a country home with a horse, a dog and yet another cat. I thank He who cares for the sparrows that He helped the kitten's leaving go so smoothly.
Besides we have delivered rather complicated tax returns and hope for some "pay back" in June.
Did I tell I had an appointment with the family doc and got more antibiotics?

Tomorrow is an early rise. We've got a flee-market to catch.
Have a blessed week end and entrance to the wonderful month of May.
Lagt inn av Felisol kl. 1:31 am

Amidala is so cute with an impressive name.
Did you get her neutered or splayed?


Hope it was not too hard finding homes for the kitties. You must miss them too.

We watched the Royal wedding. In India the interest is high.
Its fun entertainment and diversion from the ordinary for me.

I am not for any sort of monachry in this present age.


Oh I saw the King and Queen of Norway walking into Westminster Abbey.

Now the heat is worsening. Our garden is doing OK.Have the summer vegetables put in

Thank you for the link. I will get on and look around.

I have been off of blogging for awhile, but I do plan to continue now, maybe a little less, but for sure I'll keep posting!

I always follow your blog... ALWAYS! I just love your pictures, and the words of your heart are so special to me.

Hi Felisol,
That is certainly a fine looking kitten. Glad you found homes for them. And I'm glad the therapy helped.

Ginny and I love to go to flea markets, couldn't have furnished our home without them. But, when I buy something, Ginny says, "One man's trash is another man's trash".

I love her but she has poor taste.

Amidala is a sweetie. Nice name for a queen kitty.

I must have watched the royal wedding three times. First in real time, then repeats as various members of the family checked out the recording I made. I really enjoyed the simplicity of the ceremony.

My dear friend across the sea .. it has been too long coming to visit here and see what you and the family are up to :) I'm happy for the kittens going to good homes .. and mama cat having been fixed is doing well. God is good indeed! We have finally broken free of Old Man Winter's grip .. he was rather mean spirited around the world this past year. Yesterday hiking around my woods I spied a few buttercups and now the trees and plants are vibrant green. Have a blessed week.

P.S. Ann and I had our own little royal pajama tea party complete with princess wands, hot tea, blueberry scones with lemon curd & clotted cream, and cucumber/cream cheese finger sandwiches .. in the middle of the night! What a delight .. but now I am glad all of the news coverage is OVER :)