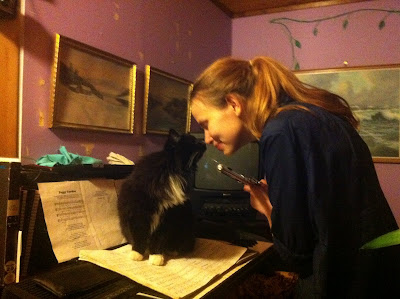 For one month and a half our two kids have been playing together late and early, hunting high and low, using balls, newspaper mice, you name it, Serina and Amidala have done it.Serina came home in mid December with her bachelor degree and left for further studies in Ireland today.Meanwhile we have all been under the influence.....She is totally obsessed with the new Sherlock series. Down in Gunnar's study she found her old flute and some sheet music, trying out some lines from Paganini, opening music of the series.Amidala was not amused. She simply lay her mighty body on the sheets so Serina was unable to read to music.Lots and lots of laughter. Gunnar caught the golden moment with his iphone.I just stood there laughing.

Gattina from cats on Tuesday is hosting this meme. Visit her.

I know you must be sorry to see her go . But glad she is doing what she wants to do .You & Gunnar must be very proud of her .
Is that the new Sherlock series on the BBC? If it is , I love it , too! I have been waiting for season 2 . It haven't aired where I live yet . :( The pic of Serina& Amidala is very sweet !:)

Amidala rules the roost! Even Serina looks amused. What a great time you have had with her home, I can just picture all of you together.

Prayers go with Serina as she furthers her studies. How proud you must be Felisol. I feel so proud of her, she is such a joy, and I always love hearing you talk about her.

Amidal sure rules our home, and how she enjoys it!
We are watching the new Sherlock series from the BBC. Serina has found a way to stream it directly when it is showed in England.
She's got us oldies enthusiastic about it too. Geeks the whole bunch.

We are happy that the one we love most dearly here on earth so bravely is pursuing her goals.
She went to Ireland all on her own, not knowing a soul over there.
We do all pray that she may find both good friends and knowledge in Dublin.
Being a little scared, but still going through with ones plans, that takes guts. Serina is a brave girl. THAT we are proud of.

What a fun moment to capture. I know you will miss her. I can't imagine traveling to another country when I was her age. She's a very brave girl. I know you are proud of her.

dear felisol..these two "kids" are so sweet...did you know that serina means 'Composed; peaceful; cheerful'. and
amidala means beautiful flower?
is it strange that these two girls could tease each other and not be aggravated but laugh the whole thing off?
oh i know that you and gunnar are surely going to miss the princess but oh how sweet amidala is going to be missing her!...god bless dear serina...and as myrna says, you must be so proud of your lovely daughter...love terry

Dearest Elise, I have so much to catch up on here. I have been visiting no one lately. Gunnar's photo of the two kiddies is priceless. Serina is such s beauty. She is obsessed with the new Sherlock??? YES!!! I love it. We have watched the first run and the reruns. Can't wait for new episodes. I just finished reading A Study in Scarlett and will be picking up another shortly.

Lovely photo for sure you are very attached to this cat.

What a great moment captured! That daughter of yours going off on her own little adventure .. big brave kuddos to her for taking off on her own wings .. running with life. She has been prayed for and over and given a good foundation by loving parents .. and a kind fuzzy friend.

this is so sweet. Congratulations to Serina and all the best for the future