Psalm 107:29" They reeled to and fro, and staggered like a drunken man, and all their wisdom was swallowed up--
28 They cried unto the LORD in their trouble, and He brought them out of their distresses.
29 He made the storm a calm, so that the waves thereof were still" (Hebrew version). 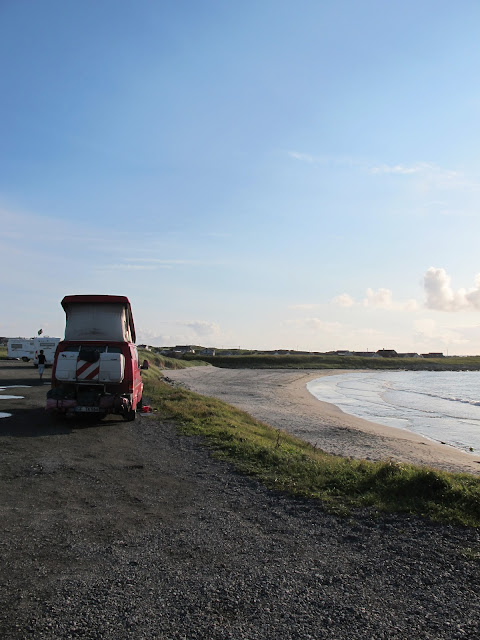 My Christian ethic theories are pretty much the same as those of other people, be they Christian, Humanists, Buddhist or Holistic.

When it comes to practice, I both spiritually and literally tend to stumble and fall.
Last week we had a rare sunny, but cold day. (So far we've had the most rain summer in eighty years).
We went out on the island to one of the roughest, remotest, but also most beautiful beaches there.
The wind and the waves are always howling in from the west. Wading there there, (one dare not swim), is like being absorbed in by nature. It kind of opens its door and let you experience its splendor for a precious moment. Cool, living, salt water, sand between my toes and the roaring of the waves, never ending, never at ease. 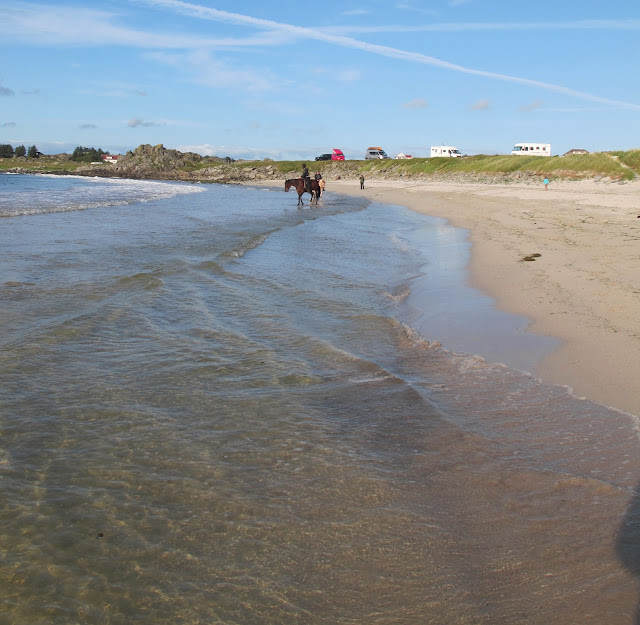 In summertime there often are intruding snakes in our secluded paradises. Foreign, camping people, who will not pay the small fees of staying in legal and nice camping sites. Instead they squat on nice viewpoints, with neither water nor toilet facilities, most likely not even a dustbin. Result; pollution and taking up space for ordinary visitors.
Result 2; I get irritated and try to chase the squatters away. I am not known to be shy when provoked. I am in fact struggling with my hot temper. 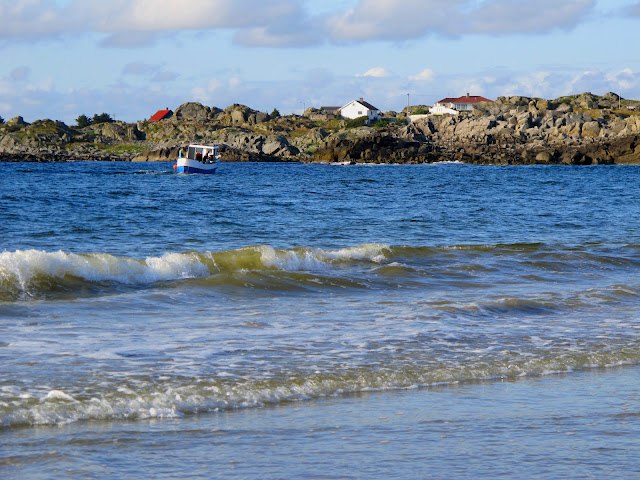 I climbed up the stones from the beach in order to set the record straight, when I stumbled and sprung my ankle. That very ankle was broken some years ago.
Suddenly my priorities were turned upside down.

I stopped caring about the campers and begged God for mercy. Begged to avoid one more broken ankle.
My foot swell up so that I could not touch the ground with it. I did not go to the ER, I was too tired and in too much pain to sit there. I prayed and held my foot in cold water. I told my family, I just needed to wait and pray. I was heard. 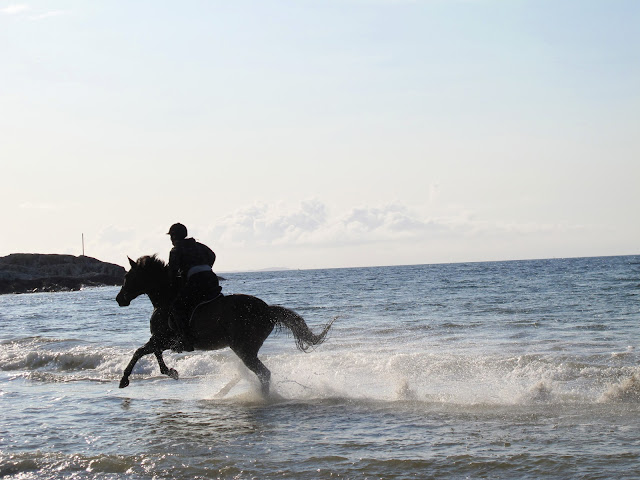 After a few days I can use my foot a little. Life with and without the use of a foot cannot be compared.
What do I know about how those foreigners would have treated me? Most likely they might even have had weapons on board their vehicles, Gunnar says.
My shepherd by my right hand did protect me from my own stupidity. 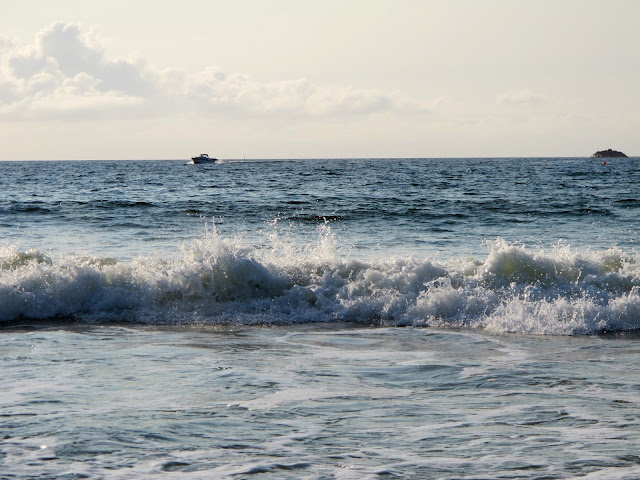 The little red ball to the right is a marker left by the fisherman so that e can find the crab trap. I think I am equipped with a red ball too, so that the Lord can find me "reeling to and fro, staggering like a drunken man."

We allow our emotions to get the better of us at times, leading to less optimal results, like your ankle sprain. A dose of prayer led to God's response that forced you to slow down - suddenly. Squatters are hard to tolerate, but your safety first. The coast is rocky and rough in places - but so beautiful! Hope your ankle heals fast...

Alas, I wrote a comment and then received a "service unavailable" message when attempting to post it...so I'm trying again.

So sorry to hear that you hurt your ankle - glad it wasn't more serious! I love it when the Lord protects us from ourselves...but sometimes wish it wouldn't come with pain - hurting ankles or hurting hearts! Blessings on you today, Elise!

Such lovely coastal scenes from unusual perspectives! Take great care of that ankle!

I'm so sorry about your ankle, but I had to laugh at your funny description of how you were all set to handle things. Oh can I relate! Sometimes God has to sit me down too Felisol. :)

I also reel like a drunken man overwhelmed by life and its harshness, and I cry before the Lord, like right now while reading your post. The scripture verses in the begining touche d my heart. The Lord is with me no matter what happens.

The rolling waves of the ocean are symbolic of the vastness and uncertainty of life. I love the photos.

You are a crusader for justice an d right living Felisol. You will stand against wrong doing.

I am rahter shy and passive, i let people go until I can' t stan d it no longer, and they take advantage of my kindness, I know that too. Some poor people were squatting on my church campus , using our resources and making the place dirty, when things came to a head we had to evict them.

Take care of that foot.

You are such a blessing to me. I can just picture you writing in that prayer journal. It will be so good to see the answers as they come!

Oh I'm so sorry about your ankle. I love that you were able to find a spiritual lesson in the midst of your pain though. Put ice on it and elevate your ankle. An ace bandage may help but an x-ray would be best. Sorry for the nursing advice; can't help it.

The Lord has a way of keeping us in line, doesn't He?

Beautiful photos. Yes, I is agree as RED is not always signs for LOVE but also signs for warning and dangers..

Visiting from Ruby Tuesday 2- hope you can stop by..

Yes, the Lord has a way of keeping us in line...and YOU have a way of 'seeing' that, and passing it on to us.

We continue together to learn, and be willing to grow along spiritual lines.

Always when I come away from reading your post(s) I feel a bit lighter, a bit more free, a bit more safe.

i am here thinking of you dear felisol...i cannot complain about my weak legs when at least i have both my feet to stand on, and you have such a poor foot....you don't know how much i admire you climbing those strong waves...it would scare me to pieces!....i love you..love terry

This post makes me smile...not at your discomfort...but at God's mercy...His way of keeping us even when we do not think of it as His mercy....Hoping your ankle is healing rapidly....:) love you, sister.

The words you wrote here are worth taking to heart. You wanted to be the police of your still surroundings, chase intruders away, give them a piece of your mind.

But your Gunnar is right, you could have been harmed. God knew how to stop you and protect you.

I am praying for your complete recovery, dear friend.

The photos are awesome. Norway is a beautiful land.

Blessings on your summer days...
Lidia

Lovely parable, Elise. I count your ankle injury as a save from something potentially worse.

Beautiful Beach Pics! I am so glad you were not seriously hurt.I hope your ankle heals soon.I think you were kept back by the Lord's Hand.

The post you wrote about the youth shooting is a fine tribute to the Norwegian spirit.

Various problems have kept me off line for a long time, but I'm trying to catch up now.

Oh Felisol, I am so sorry that you were hurt! But I understand your anger. I would have felt the same way! Those squatters would be ticketed here and told to go camp somewhere legal.
Praying that your ankle is feeling less painful deaf sister.
Love,
trish

hope you guys are WELL now and just enjoying your special day ... happy anniversary to a sweet couple!!!!!! big (((hugs)))