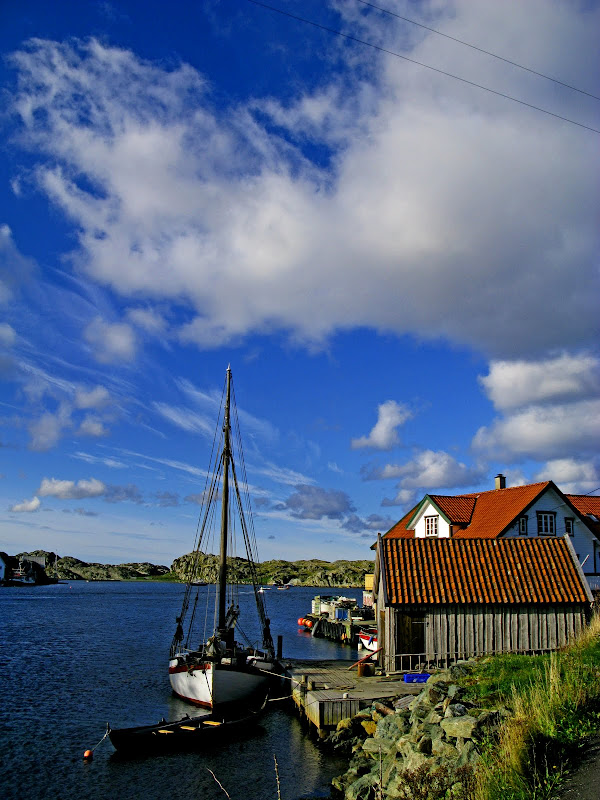 Our town, Haugesund, is situated at the utmost south-west in Norway, with only a few small islands outside to protect us from the rage of the North Sea.One of these islands, Roevaer, actually is a part of the main city, same mayor, same council e.t.c. 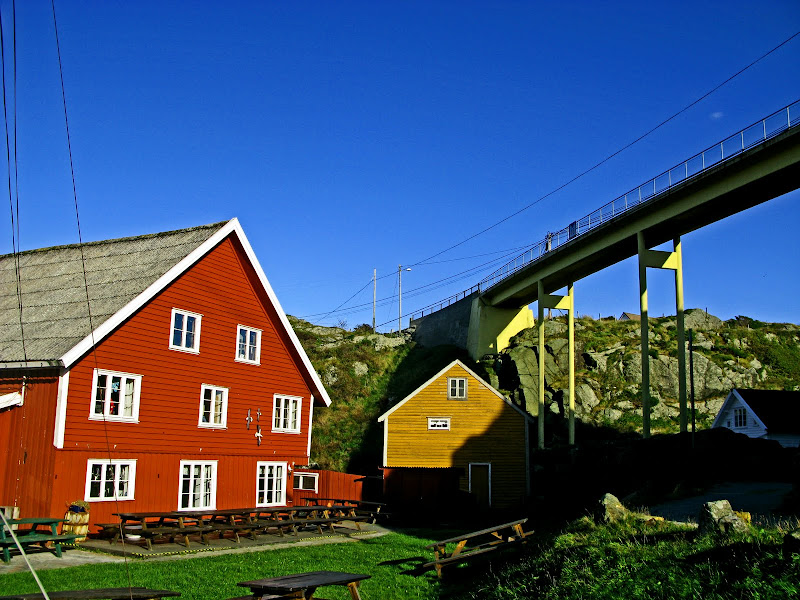 About 100 people have their home here. There's a school, a museum, a couple of painting artists, viking grave sites, a small store and a spa hotel.To keep the small society alive, they are advertising for new inhabitants, preferably with children. Some Dutch people have settle down and are thriving well. Main occupation is fishing combined with minor farming. The men go fishing, their wive tend the handful of sheep and cows. The women are a strong breed. Many a husband have not returned from stormy days at sea. Once 11 men drowned on their way to the mainland (Haugesund)to bury a friend there. 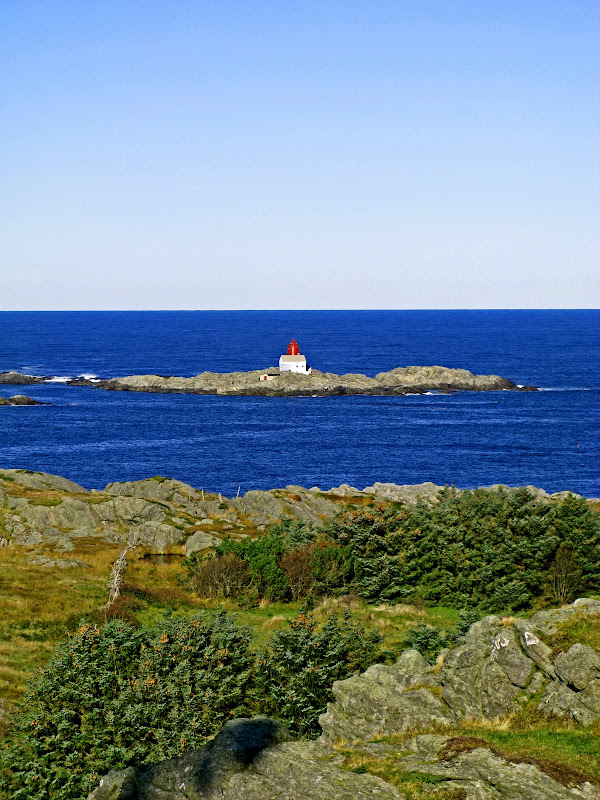 After the last disaster in the 1990ies, a light way was set up to mark all the dangerous under water rocks. The boat trip takes about a quarter of an hour from Haugesund's inner quay. The hiker ladies have been there repeatedly. We enjoy island jumping. These pictures are from early October this year. As you can see there's nothing but the endless sea that meats the eyes. Further west lies Shetland and the North Hebrides. During ww2 brave young men set out in small vessels to join the British Army from places like this.

I love when you share photos and information about the area in which you live in Norway. I'm always so interested. I love the colors which seem so bright to me. It is so different than the desert of Arizona. Of course, each area has its own unique beauty but I have to say that I miss the ocean. My favorite food is salmon!

So good to visit you even though it's just online. I love it though.

What a lovely seafaring island and area. Of course, the lovely meets the stormy often enough. The North Sea allows stunning beauty or stormy fury. The nice day shows the wonderful town at its best, and obviously, the red buildings look just right. You inhabit a country and city of immense beauty

Hi Felisol, you are soooooo fortunate to live amidst such beauty. When I come, please remind me not to stray to the west of Haugesund. At least until you build a bridge for those 100.

The floor lady here is the lady sales person who sold us our new flooring. She is okay.

Happy RT. I'ms still behind but jumped down to peek in on you ASAP when I saw your nice comment. Gunnar can meet with our car club when you come. Once a year we meet at John's place.
..

This is such an enchanting place Felisol, speaks of adventure, hardship and enterprise and history. I really like what you show us and all the history behind it.

It must be getting cold out there. May God protect you all.
Here we are experiencing what would be summer for you.

Please come and find out what our little fashionista has to say.

great photos and i love the story about this island. sounds like a rough life but i'm sure a lot more stress-free. viking grave sites, how interesting!

Wonderful history about what we're seeing.
That first shot reminds me of HDR images - lovely! As are the others.

Awesome photos and commentary. I am always drawn to your blog to read about your pictures. Thank your for taking the time for all of us to read. One thing though, my wife would jot tend and cows or sheep. She would just laugh at me for thinking such a thing. :)

What a wonderful glimpse of your little town Elise. Considering a recent comment you left for me, I am very glad to learn that you small town is thriving and is actually gaining in population. I was intrigued by the middle photograph. Is that a train tressle?

What a remarkable place, reading your wonderful descriptions I almost feel like I'm there. Perhaps some day I will be, and then we can hike together.

Incredibly beautiful landscape. Sounds very rustic - I can tell one has to be hardy to live there.

It looks and sounds like a fantastic place. Beautiful shots!!

Happy RT, mine is here!

Dear Felisol...what a beautiful place your Norway! The colors, so vivid and what wonderful history you still cling to. I am catching up on my Blog reading and as always yours blesses me!
((hugs))
trish

do you understand me now felisol?..though the sea is a lovely blue, i have always been afraid of it...mostly because of all the people that have never returned from it..so so sad..
the little island is lovely though.
when the sea gets high, will it be often flooded?
your town of haugesund seems very peaceful and lovely felisol...one of these days if bernie and i come to see you, you will teach me not to be afraid of the sea!
love terry

Dear Terry,
For millenniums the coast and fjords of Norway have been the "the country roads".
People have been going by all kinds of boats rather than building roads in our rocky inland.
Even when I grew up, we would rather go by boat to Stavanger than by car or bus to Haugesund. (exactly the same mileage from my birth town)

Out on this little island Roevaer, small children come for a week of school camp from April till end of September learning the basics about fishing, steering a boat, what food one can find in the sea. Catching and survival.
Serina camped here twice, once with her primary school and once as a scout.
One's got to work with the elements, not against them.
I feel far safer at sea than on our curvy roads with all those trailers and young manics around.
The island has never been flooded, because the buildings are set up with respect for the elements. Where the sea may go high you will not find a single building or a cow for that sake.
In the curvy bays the taller buildings are set up, on cliff ground, sheltered from the storms.

another thing is; when tragedies struk, people stick together to help the ones left behind.
They all know, next time they might be the ones in need.
Nowadays there also is widow pensions from the government as well as free schooling, free medical treatment and help for anyone in need.
From Felisol

wow those are really nice photos! the blue sky compliments all those bright colors :)

u may view mine if u have time

the vibrant reds against the amazing sky is so beautiful!!!

these photos are stunning

Your photos are amazingly crisp and clear. Such beauty around you. Thank you for taking the time to share the history behind the photos.

A beautiful place to spend time, hiking, or relaxing. Such vivid colors, lovely Ruby Tuesday along with the interesting history.

I like that small photo of you on the sidebar...i'm guessing that is the National dress?

If I was a wee younger, I'd join the new inhabitants .. women folk that tend to the animals. The way growing food is bet met on small family run farms. Beautiful composition in your photographs.

Gorgeous spot! and the vivid colors..wonderful! thank you for sharing.

I didn't realize you live in the southwestern part of Norway until I read this post. It's very lovely there!

thanks for the true explantion felisol...i guess it really does make people support and encourage each other when these tragedies happen, eh?
ah! that mystical teacher says it so well in her comment poem.

oh for such endurance!!

tell me felisol, if i was not so nosey all the time and not just reading my friends posts but all of my friends comments...do you think that i would get caught up on my own behind comments to the different blogs?
i just don't know...ha!....love terry

Dear Terry,
I love your comments, questions and thoughts. they show a genuine interest in what's going on. Please do not stop being your lovly self.
From Felisol

So this is a post about a small island. WHen I first read it the other day, I thought it was Haugesund. How beautiful the islands in your country are ... so very European. So different from the tropical islands in my country. How many islands do you have?