Ruby Tuesday and The Lotus Eaters #7


This is a Standing stone, marking a slate grave from the time, when the druid cult was dominant in our neighborhood. The photo was taken shortly before sundown a week ago. A burnt down church can be spotted in the background.
The standing stones are also known for being phallic symbols. Wow, our landscape are full of them.
The Ulysses also has many sexual references, some placed there by James Joyce, even more found and interpreted by students of literature.
Sexuality is what makes generations coming and going.
As long as it's not obscene or exploiting, I see nothing wrong in that. 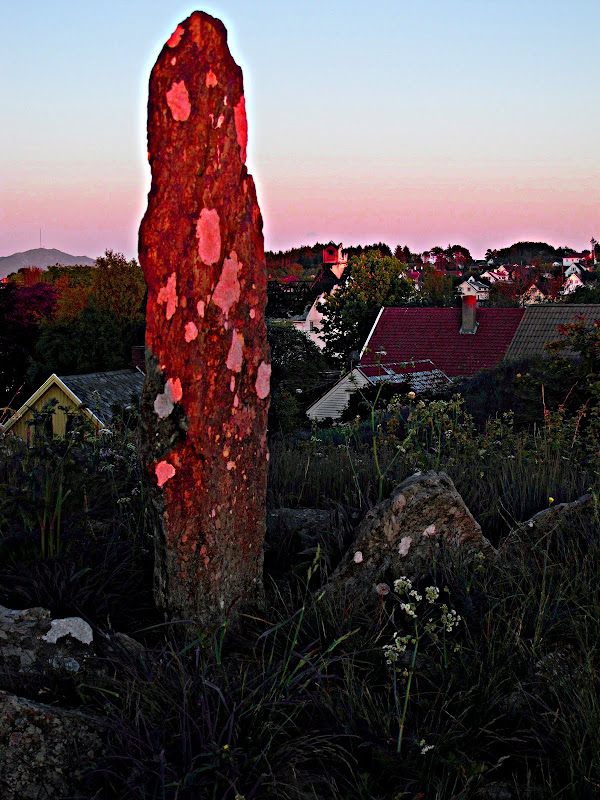 The chapter called "Lotus Eaters" is amongst others about escapism.
Also it is about entheology; meaning what's making God to be inside a person.
This may refer to plants or substances eaten by ancient religious people in order to come close to divinity.
Our Christian Holy communion is in Bloom's world, (and in fact also in the Christian's), eating the body of Christ and drinking his blood, our mysterious way of keeping this connection with the Holy. It would have been easier, and less offensive, celebrating Christ in a more"normal" way, with prayers, even dressed in ashes and sacks. However, this is God's way of letting us know how small we are, and how powerful he is.. 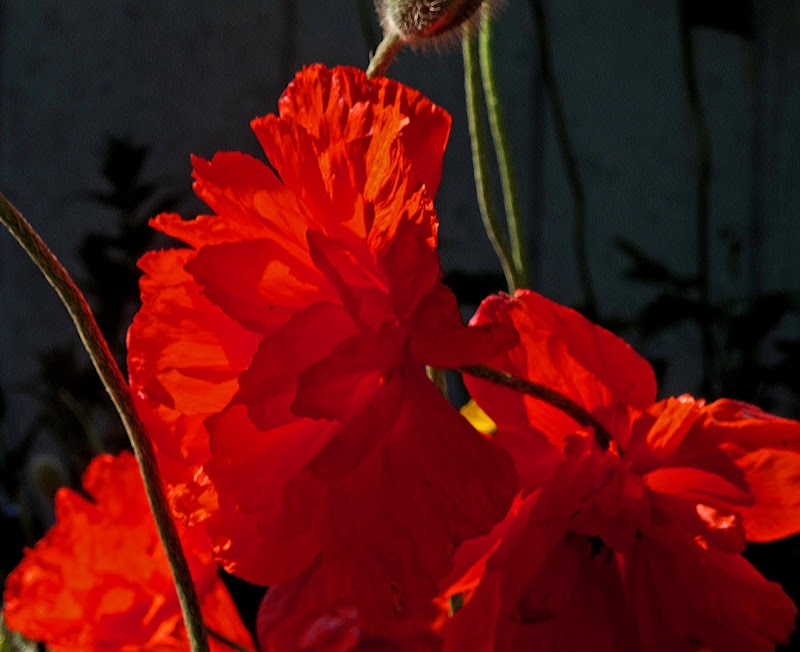 Leopold Bloom's in particular; in this chapter he literally is walking in a circle, never getting any of his small errands thoroughly done.
I've had those nightmares myself, feels like walking in syrup, hardly moving at all.
Thinking about it, I've been doing the sleep walk, while seemingly awake, but never seeming to get anywhere. "Life is something happening, while you're busy making other plans." 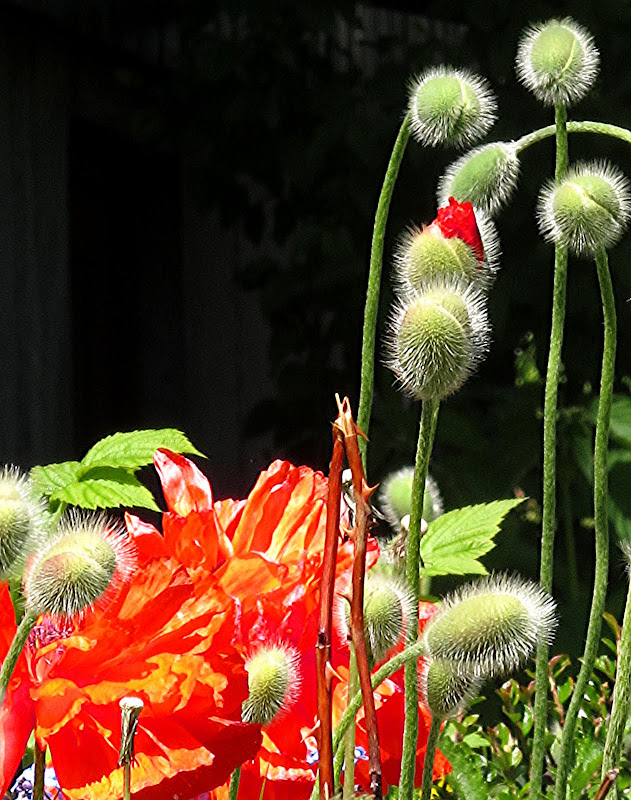 The lotus eaters of Homer gave Odysseus' men lotus petals to eat, and thus made them forget that their aim was sailing to their homeland, Ithaca.
To Leopold Bloom the lotus is a narcotic substance; a cigar is mentioned.

Bloom is a Jew, but not kosher, when it comes to eating.
In this chapter he casually enters a church, and watch from outside the congregation receiving the holy communion.His mind is swirling around, half critically, half indifferently. He has many accurate observations, but somehow he constantly avoids getting deeper engaged.
He's not superficial; he's confused, procrastinating, walking the whole circle through, many question asked, no answers given so far. 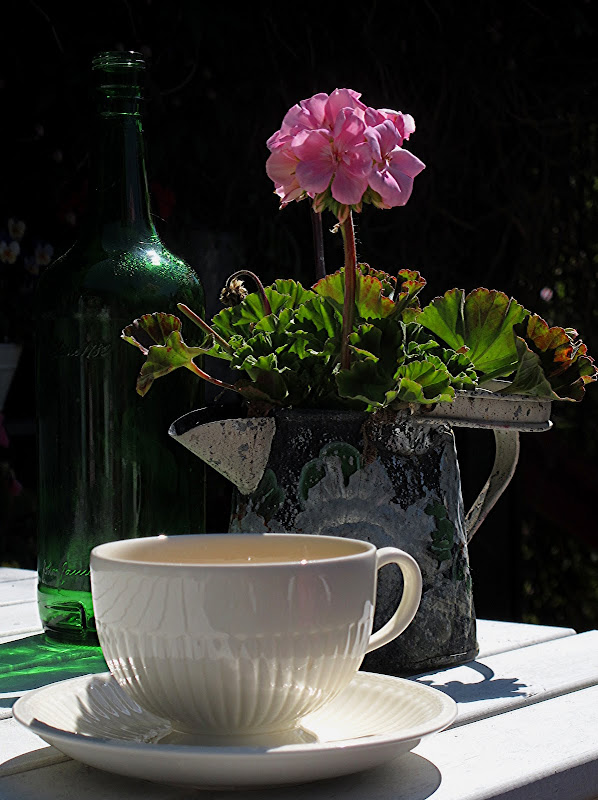 From Lotus Eaters:
"The cold smell of sacred stone called him. He trod the worn steps, pushed the swing door and entered softly by the rere.

Something going on: some sodality. Pity so empty. Nice discreet place to be next to some girl. Who is my neighbor? Jammed by the hour to slow music. That woman at midnight mass. Seventh heaven. Women knelt in the benches with crimson halters round their necks, heads bowed. A batch knelt at the altar rails. The priest went along by them, murmuring, holding the thing in his hands. He stopped at each, took out a communion, shook a drop or two (are they in water?) off it and put it neatly into her mouth. Her hat and head sank. Then the next one: a small old woman. The priest bent down to put it into her mouth, murmuring all the time. Latin. The next one. Shut your eyes and open your mouth. What? Corpus. Body. Corpse. Good idea the Latin. Stupefies them first. Hospice for the dying. They don't seem to chew it; only swallow it down. Rum idea: eating bits of a corpse why the cannibals cotton to it.

He stood aside watching their blind masks pass down the aisle, one by one, and seek their places. He approached a bench and seated himself in its corner, nursing his hat and newspaper. These pots we have to wear. We ought to have hats modeled on our heads. They were about him here and there, with heads still bowed in their crimson halters, waiting for it to melt in their stomachs. Something like those mazzoth: it's that sort of bread: unleavened shew bread. Look at them. Now I bet it makes them feel happy. Lollipop. It does. Yes, bread of angels it's called. There's a big idea behind it, kind of kingdom of God is within you feel. First communicants. Hokypoky penny a lump. Then feel all like one family party, same in the theater, all in the same swim. They do. I'm sure of that. Not so lonely. In our confraternity. Then come out a big spreeish. Let off steam. Thing is if you really believe in it. Lourdes cure, waters of oblivion, and the Knock apparition, statues bleeding. "
(James Joyce) 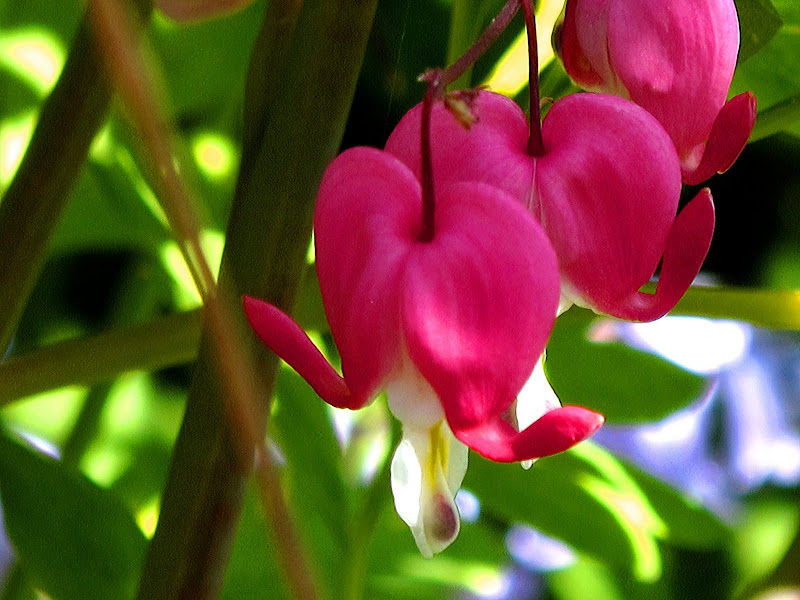 I find no mocking in it; just the eternal wondering, twisting and turning and triple bottoms.
I guess, one finds, what one is looking for most of the time.
"Search and you shall find," Jesus said.

Great post and I love the flowers and photos.

those are such lovely shots and great finds for Ruby Tuesday!

Beautiful images today, dear E. I think I would have to read this passage over and over to absorb it. Like my weekly readings with my CL group, reading the assigned passages once just is not enough.

Thank you for sharing these lovely photos.

These pics are just incredible, I love poppies and here they in their best

great photos and the flowers as well

Your photos are striking and so colorful.

What you hav e about the lotus eaters is very interesting.

I hadn't thought about nature in any other way in that God creates nature, and all of God's works are of beauty.

It is interesting that in other ancient cultures take the beauty of the God we worship and applied it to their spirituality of their time.

All these flowers are of bold colors, the beauty so easy to behold...

You seem to be getting a LOT out of James Joyce. I find him difficult to read so I'm impressed! Great photos of the poppies!

dear felisol..i have missed you!
everything turned out real good for dad golden and i thank you for your concern.
there sure is lots of nice red flowers in this post felisol..really pretty.!
as for me felisol, i am very thankful that before the lord left for heaven actually before he died on the cross for us that he instituted the lords supper.
how great that even though we should remember what he did for us every day of the week, that on sunday, especially we take the bread in remembrance of his body and the wine in remembrance of the blood he shed for us...how blessed we truly are felisol and how blessed i feel to have a friend like you...love terry

I'm not sure what impresses me more, the command of Joyce, or the pretty red monolith.

I so love your post today very interesting. And the first photo I thought it's a tree. Great shot! Happy Monday!

How tall are these stones? Where did the Druids find them?

Hello, Ann,
the standing stones in our country are from church high to knee high.
The stone on the picture is as tall as my husband.
The stones are found in the terrain near by.
They must have had some technique to freight them and make them stand for thousands of years.
Later on vikings made crosses of the same material and posted them along the coast.
A mighty sight, that is.

Good, Felislol. I haven't visited many this week as we are traveling starting Thursday. You will hear.
I'd best watch out for those Lotus Eaters if I make it that way. They may make me want to stay as well. :)
This is a wonderful post. Happy RT!
..

Another lovely post, Felisol, and the photos of the flowers are amazing. What camera do you use? Well of course, you are a professional, while I am still very much a neophyte... but my aim is to someday be a professional photographer.

No other reason of course,just for my personal delight. Photography is therapeutic, so is blog writing.

I'm amazed that you posted a picture of a standing stone. I almost posted one for my latest entry on the EBenezer stone... but decided to change it at the last minute.

Well, I hope you find your EBenezer stone soon, and tell me about it.

Hello Felisol! We have a saying across the seas. The wife of my cousin is my cousin. Hello cousin. Your picture of the monolith is awesome. I read every bit of your post and loved it. Keep your spirits high. Even though we have not met, my wife and I feel we know you but a little through blog. take care.

I love your photo of the Standing Stone. Imagine having one of these right in your own backyard! What a thing of wonder.

those are really lovely photos! :)

This is one excellent post today...so informative, so educational and a plus of such beauty!

My ruby entry is "Skipping Rocks" - a sculpture. Hope you can find time to visit with me today!

Gorgeous photo's...the flowers such brightly colored beauties!
Search and you shall find Jesus...
those are the wisest words ever spoken.
Hugs, Dear Felisol!

Lovely photos and interesting text.
The Standing Stone was intriguing, a lot of history in that big stone.

Once more your photography is so superb! The colors and details in the flowers are just striking.

Your comments on my page always bless me. Your honesty and expression is beautiful.

Our trip to Norway is going to be so fast. We land in Oslo and then we go to Tromso, way up north, where many aunts and cousins live. I think we have only one day in Oslo before we fly out again.Oh how I wish there would be time to meet and have a good cup of Norwegian coffee together and time to visit. It would be a dream to return and really spend some time there, but then... this trip is also a dream. I will wave as we fly by. I just can't wait to stand on Norwegian soil!

I'll be telling you all about it and share some of my uff da photography too! :)

Did you take these photos? They are works of art. The first one reminds me of Stonehenge where my husband and I camped in a rented camper, across the road from it. These standing stones are still mysterious.