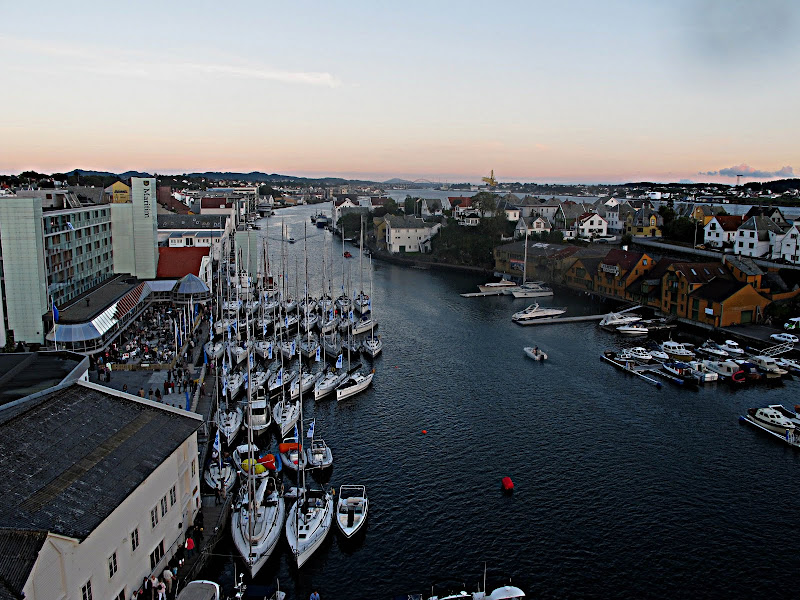 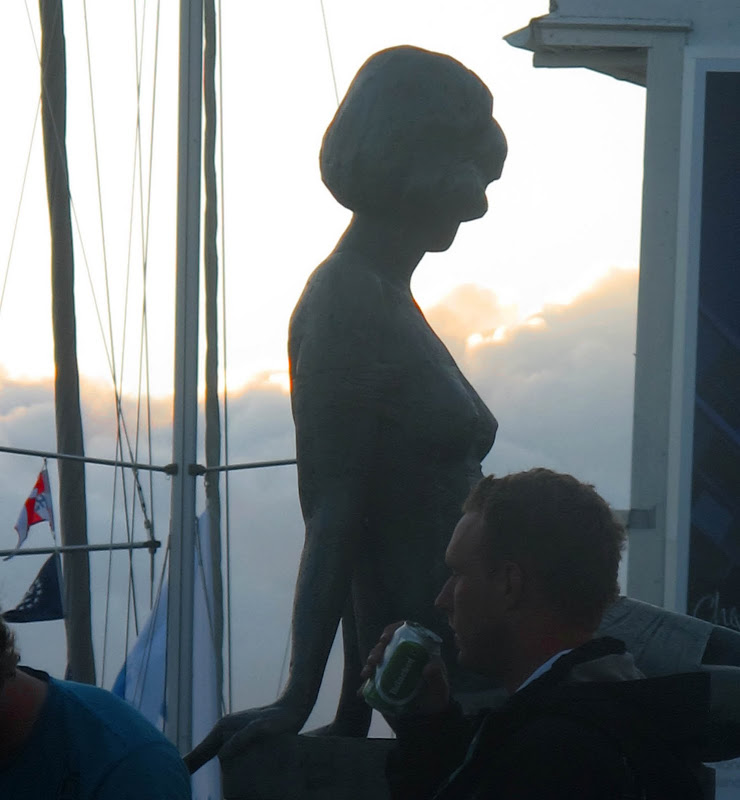 Intoxicated dreams of Marilyn Monroe.(The diva's father came from our town, ergo are we entitled to a statue of her honor.) 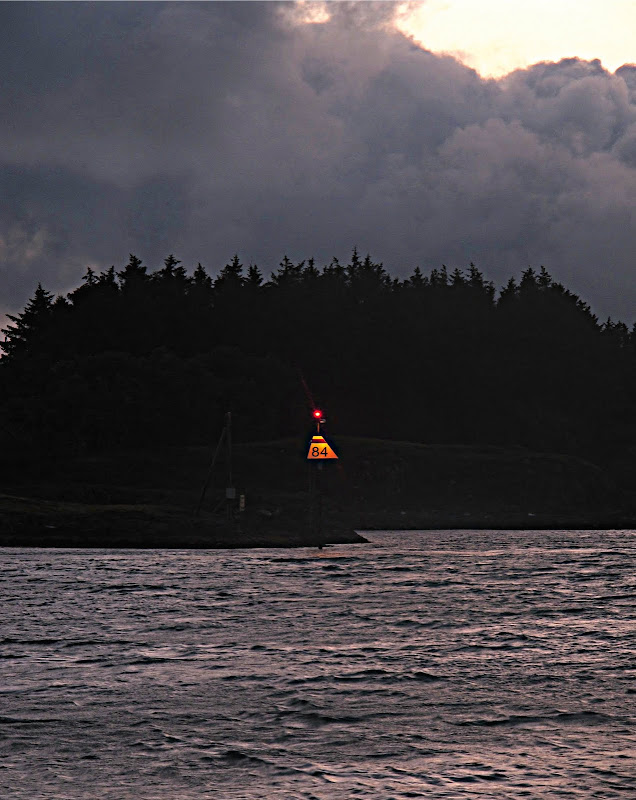 
According to Homer Circe was a woman with extraordinary power. She spellbound men, and then turned them into swine. Odysseus' men were captured and degraded this way, but the hero from Ithaca managed to force Circe to set them free. 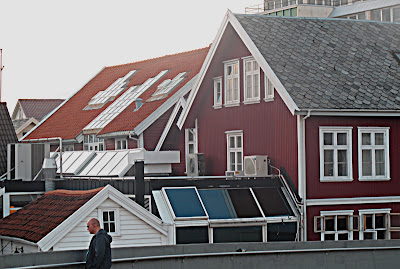 Transcending to "the underworld" 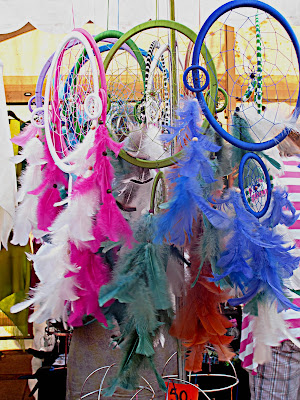 During the festival anything can be bought. Bloom probably would have felt he needed a dream catcher. 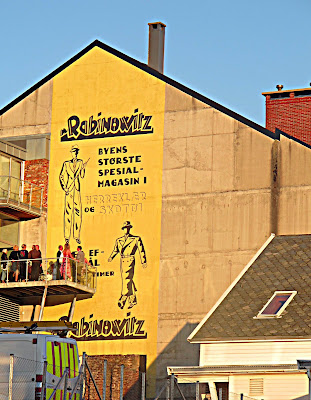 Rabinowitz, "the man who loved Haugesund", was sent to extermination camp by the Nazis. He was a brave man, who fought racism with his pen in all the papers of Norway in the thirties. He also created a rather great clothing company, producing and selling manufacture and shoes. This wall ad has been seen on the quays since Rabinowitz was on the height of his power.

In Ulysses our antihero Leopold Bloom meets Circe in form of a brothel owner, Mrs Bella Cohen.
Bloom stumbles into the "night town", the red light district of Dublin, to save himself, young Stephen Dedalus, from the yarns of the prostitutes.

Bloom then find himself in a toxic, hallucinating world, where everything is turned upside down and anything impossible can and will happen.
In this state of body and mind he is tried for court for having sent obscene letters to the female noblewomen of Dublin. Great scandal, he's found guilty and sentenced to public flogging on his bare behind.
He is miraculously transferred into Ireland's next king with pomp and circumstance. Then suddenly persecuted as a traitor and condemned to "be hanged from his neck until he's dead".
Beautiful Zoe (meaning life) lets him in to her brothel, and so far our tormented friend is safe. 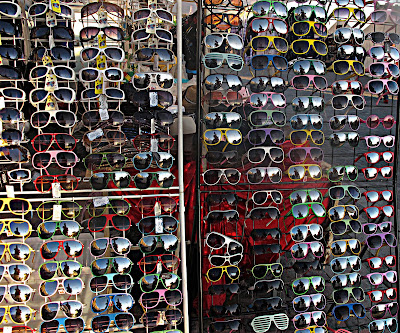 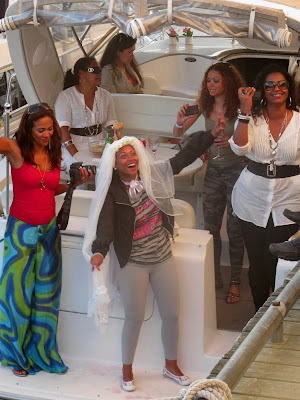 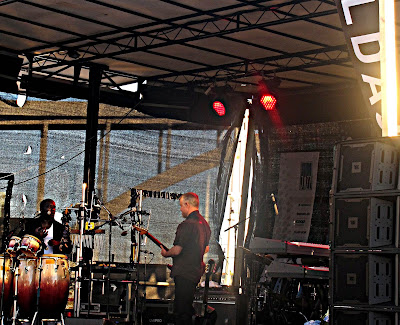 To find ruby pictures for this sequence, I had to transcribe reality. We have no brothels in our town. Buying sexual services is forbidden by law in Norway. To prevent trafficking and exploiting of the helpless this law was made about ten years ago. A strong woman's group stood behind this act of law.

A certain nightlife has grown forth in shade of so called "herring jazz festival".
It used to be a four day celebration with rather good and exotic trad jazz bands.
After 24 years, its content has changed. The quays have been filled up with several hundred meters of pubs, pouring alcohol over thousands of guests. The red, green and purple fluorescent lights along the sidewalk remind me of the term "red light district".
In the movable stalls one can buy anything a tourist may want.
Do I sound negative? Well, let me hurry to add that the waterfront of Haugesund is a most beautiful sight and place to be any time of the year. The armada of yachts and sailboats revives proud memories of this historic harbor.

I played too. Mine are here and here.

Wow that's a lot of yacht. And your place is beautiful!
A Chevrolet red pick up

This town is absolutely beautiful! Lots of water, the boats have parked and the crowd is around for the dining, partying and jazz. Sounds like a fun place tonight!

Have a great RT,

I especially LOVE the photo of the sunglasses, Felisol!

I didn't read any Ulysses this week. :( I had to attend a conference. But I hope to to really get into it again THIS week.

Love the Rabinowitz photo. Maybe one day we will visit Haugesand.

I am still struggling through bits of Ulysses. Haven't yet met Bella Cohen. You encourage me.

I was thinking that the harbor shot was my favoritew, though the others were all fun as well!

According to Homer Circe was a woman with extraordinary power. She spellbound men,-that was Marilyn Monroe too. Her sillouette is very graceful.

The well arranged armada of boats looks so good. Your town has some lively traditions.

Thanks for sharing this beutiful series.

Thanks for sharing this beutiful series.

I read all your postings about Ulysses but I find it hared to comment on them because I just don't understand what's going on. I remain silent but I still read what you have to say.
John

it's a shame the way sme things go once alchohol is involved ... but it sure is a beautiful place.
My Ruby Redness

a fantastic grouping of great pics, as well as I learned a few things. Thanx for posting

Elise! This post just captivated me. From MM to quays, and the linking of Ulysses in between, my eyes boggled at the richness of diversity here.

You have such a creative soul! I am in awe of your photos and the words you use to describe them, so unique! You really have a way with both words and photography. I love the second picture...I have a biography of Marilyn sitting on my shelf that I am looking forward to reading. I have been to Haugesund only once but thought it was a very beautiful city.
Have a great day!

Haugesund...it is another picture oF Norway that I just can't shake! The water and boats, and the towns and architecture... it's still so fresh in my mind. I WANT TO GO BACK!!! You live in a beautiful land Felisol, and your pictures are captivating!

Hi Felisol ~~ I would get smart if I could memorize everything you have been posting lately. As it is I have been learning a lot. :)

The sail boat picture makes one want to be there. Happy RT. I don't have time for this one as of late.

And now we are going to Canada for a week. To Quebec City and to Montreal.
..

Ahh ... this first photo may be the cementing factor of my travels next year ;) (I can hope, yes!) You explain Ulysses better than anyone .. even tempting me to pick up this book. Hugs,