Christmas decor by my Mom 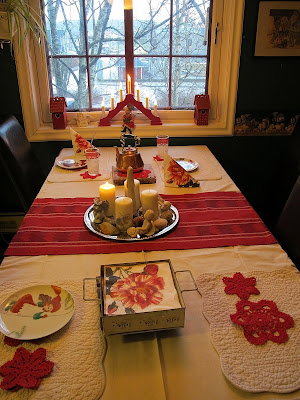 Theme for this Ruby Tuesday is Christmas decorations crafted by my mother. Christmas time is very special to our culture, first and foremost because it is Christ Mass. We celebrate Christmas Eve. It starts when the church bells are chiming the night in at 3 pm. A reminiscence from Catholic times in Norway 500 years ago. 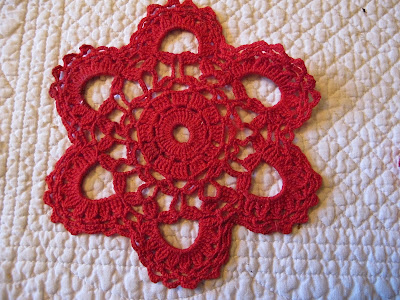 For table decoration I cover the tablecloth with place mats. My mother has crouched pieces for plates 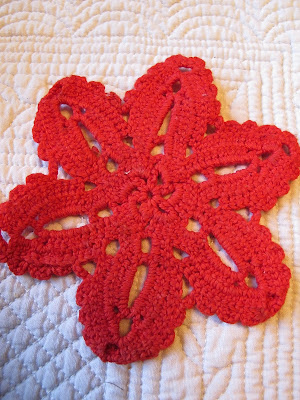 and glasses in red cotton. Sets of six, for our own core family. 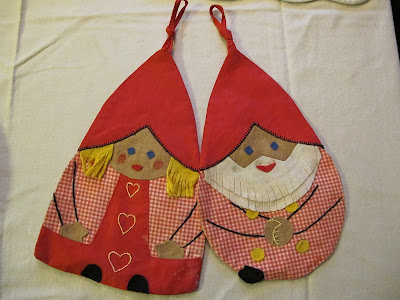 These pot holders were made in the seventies, using cotton, insulation, glue and embroideries. I love this couple and have never met their likes.
My mother never liked mass production. Her products are therefore very special. 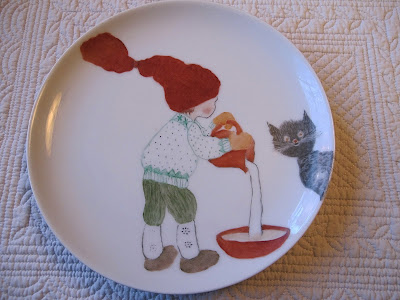 Yuletide is also an even elder celebration of winter solstice, December 21st. Our yule-nisse is a very far relative of Santa Claus. He is in fact a tiny fellow living in barns and require special treatment at Christmas time, such as porridge and leftovers from the heavy yule dinner. If he's not well waited upon, he'll make nisse knots in the girls long hair and the cows will produce sour milk. 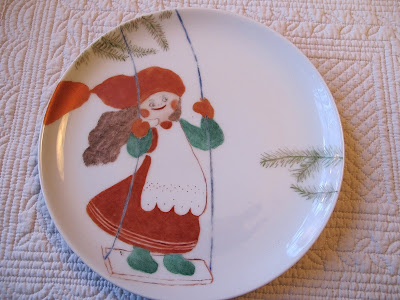 The nisse family are playful, but also craving.
They have the power to protect and spread peace on the farm, but will only do so, if well treated. 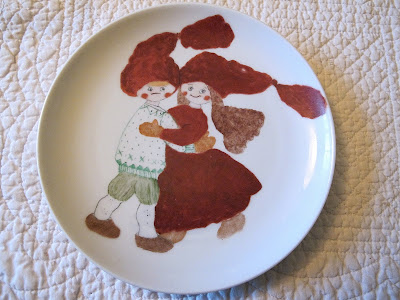 My mother painted these three plates for Gunnar, Serina and me in the eighties. I cherish them highly, and would cry if anything happened to them.
The red nisse hoods are knitted by wool, and used in many ways, not only in Christmas time. During the war, ( Yes, WW2 is what we mean by the war. In contrast to others we were actually occupied for five years, and the wounds are still not healed) as a symbol of Norwegian resistance. The nazi leaders actually forbade Norwegians to use the nisse hood. Shot was he who didn't obey. 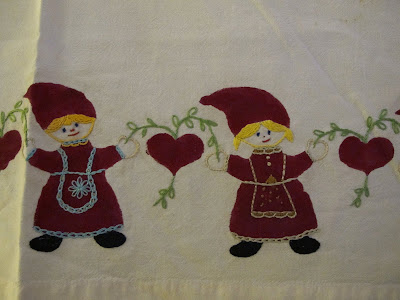 These nisse maidens are made by fabric print and embroidery. My mother again. She cut the forms, made the printing and sewed pattern. They are originally meant to be curtains, but this year I have used them for kitchen table cloth. 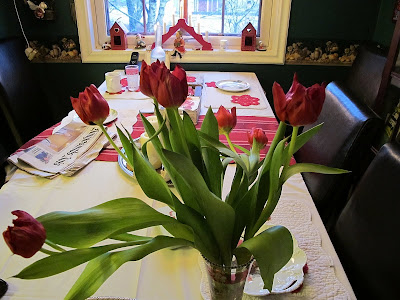 Little by little the table gets messed up during advent time. Then this bouquet of tulips, which I received for my birthdays was freshening the table up. Thank you, Mia.
Now the family is gathered and in just five days the waiting will be over.
Sometimes I think that the waiting is almost as precious as the celebration.
December is filled by preparation and joyful expectation, plus two birthdays in our family.
Joy to the world.

Happy Birthday. My mother liked to crochet and I have several pieces. Like you, I would cry if I lost her handiwork. Your table is beautiful. I enjoyed seeing each and every piece.

Your mother has golden fingers, she is so creative.

May these precious works of her hands always remain with you. Nothing can replace them. They make your celebration so special.

I love the tulips.

Oh my this is very pretty Felisol. The crochet is awesome and your dishes is beautiful!! Happy Monday!

The plates and the hand work are so very special. But even more, the love between you and your mom, and your heart toward her. There is nothing like our mother and father to make us smile, bring a tear, and fill our hearts with joy.

Remembering so many Christmas celebrations past, with my own Norwegian heritage, and I feel so blessed to share yours with you.

May each of you and your loved ones have a very special and Merry Christmas!

I am so blessed to have my Norwegian sister clear across the world, but always joined in our hearts!

Beautiful Christmas Table !Your mother is so talented , I especially love the plates . I learn so much about your life and traditions every time I visit and I enjoy it very much. Thanks for sharing so much of your heart. Merry Christmas to you and your Family!
Joy to the World!

it's so similar to the finnish culture - the decorating (ALWAYS with lots of candles) is very familiar ...

loved reading your post - i treasure things made by my mom and other loved ones too - they are so very special to me!

What precious Christmas memories your mother has created for you, dear Felisol. The Christmas tradition you shared is so beautiful. THe nisse paintings on the plates are so special, and so is the curtain/tablecloth. So touching to see all the crocheted place mats...

I love all the special Christmas decorations and mostly the handcrafted ones. My mother and grandmother used to embroider but I didn't inherit that gene; lol. But I appreciate things like that.

I wanted to stop by to wish you a Merry Christmas. I wrote a bit about my American Norwegian traditions at Christmas on Heart Choices. I've had such fun today communicating with many of my Norwegian relatives on Facebook using Google Translate. I'm not sure it's the best interpreter but they seem to understand me.

Merry Christmas to our dear friends across the sea. Your home looks so festive with all of the handmade table decorations .. your mom has lovingly made .. adds such warmth and good memories, I'm sure. Have a blessed day celebrating with family and friends.

Very beautiful artcrafts of your mother ! the plates are really gorgeous !


PS. When we travel with a cat we let it out the cage in the car, then they usually settle down in the back and look out of the window. It's the cage they don't like.

I wanted to pop by and wish you a Happy New Year. Blessings and good health to you and all your family.

Felisol, it's a long time since I've commented. I hope you had a great Christmas and we wish you God's best in 2012. Keep trusting Jesus!