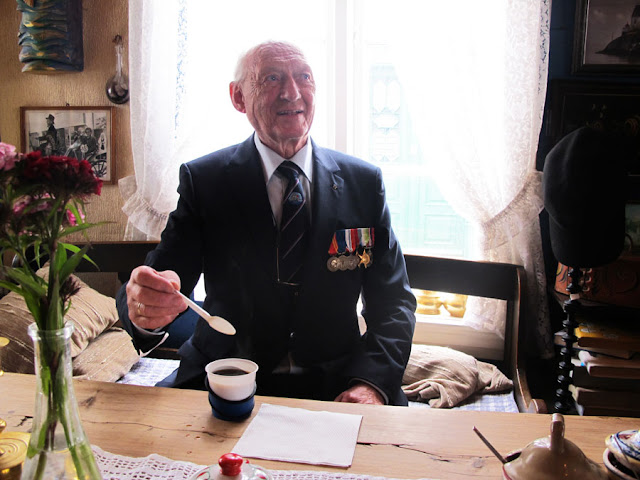 A true hero.
Soldiers may be called heroes, even though they are armed to the teeth when meeting the enemy.
Firefighters and policemen are often acting heroically, but they have been properly trained for their assignments. 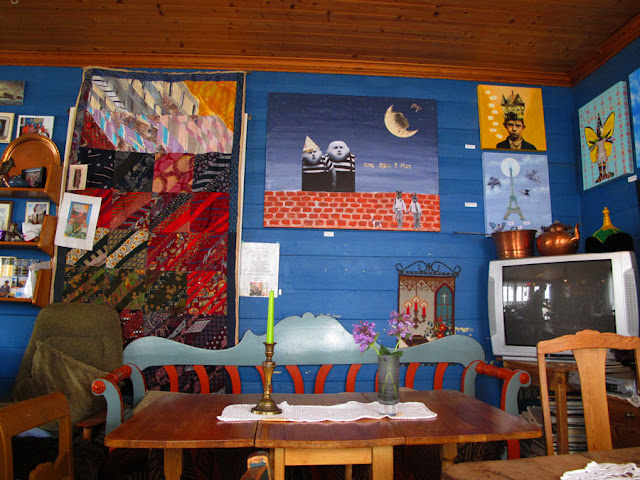 Saturday I had the honor to meet a true hero, veteran and survivor from WW 2. He went to sea as an apprentice at the age of 15. This was not uncommon for a young boy living on the Norwegian coast, not even when I grew up in the fifties.
A whole lot became fishermen along the coast line, or sailing in small vessels to Arctic or Antarctic waters.
Others followed the big Norwegian fleet of merchant ships all over the globe.
15 years and shortly after their confirmation, their mothers would equip them as well as they could afford, with a trunk of necessities and a Bible on top.

Our hero, Dag Midbø, went out on a ship owned by a local shipping magnate in 1939 and would not set his foot back on Norwegian soil until 1946. He sailed in 50 convoys, an unbelievable number.
The merchant ships were mostly unarmed, and sitting ducks for German planes and submarines. They went in convoys to freight vitals equipment such as tanks, weapon, ammunition and gas to Europe and Russia from the USA. Every tenth civil Norwegian sailor dead at sea during the 6 years of war. Many, I guess about half, were psychologically injured for life. Many war sailors ended up living on the docks of New York, London and New Castle for the rest of their lives. Leaving their ships was not an option during the war. The government declared that would be an act of desertion, and punished thereafter.
Even after being shipwrecked, the sailors were promptly placed on an other old vessel or hulk.

The young sailors were unarmed, not wearing a uniform, but nevertheless the most heroic and momentous Norwegian participants in WW 2. They were sadly not rewarded according to their heroic commitment.


Dag Midbø wrote a book about his 7 years at war, but not until year 2008. The wounds were too deep.
For English/American readers I strongly recommend Alistair MacLean's autobiographical novel HMS Ulysses. It's the naked truth for thousands and thousand of sea men. 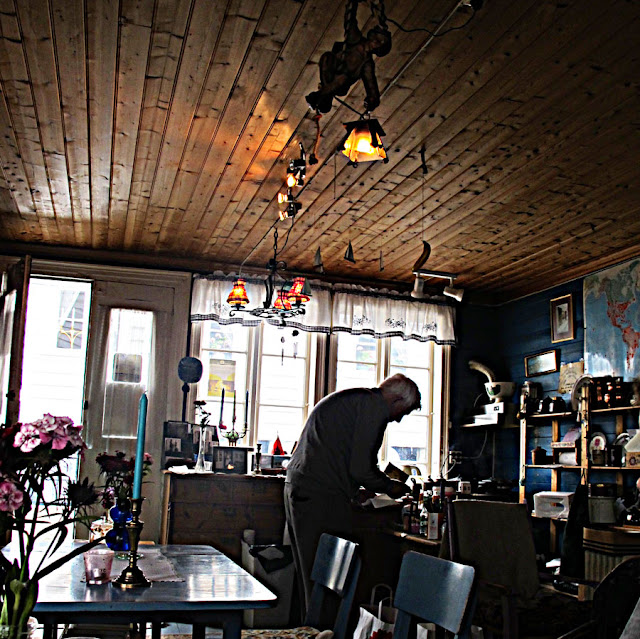 Serina and I had the luck to meet with this war hero and his daughter at a small café in Skudesnes called Majorstuen kafe.
Somehow we ended up sitting in the same sofa, and this was how we got his fabulous story. 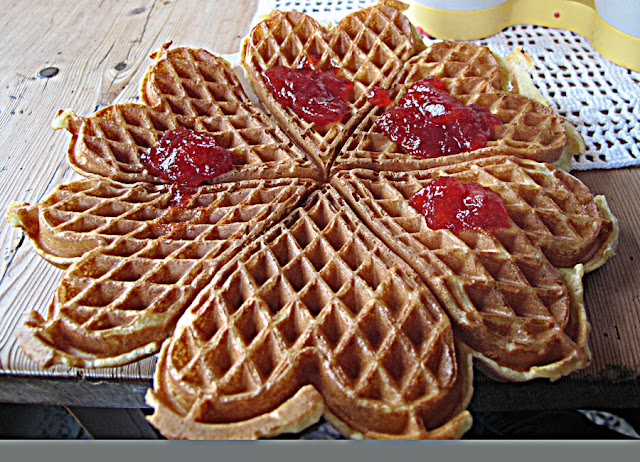 Dag Midbø came from a lunch held to honor him and the three other remaining local war sailors. He told us, this was only the second time he wore his war medals. They came too late and could never bring him his lost youth back.
His daughter was a lady my age, now a sweet grandmom, and she was very proud of her father. That meant the world to him. 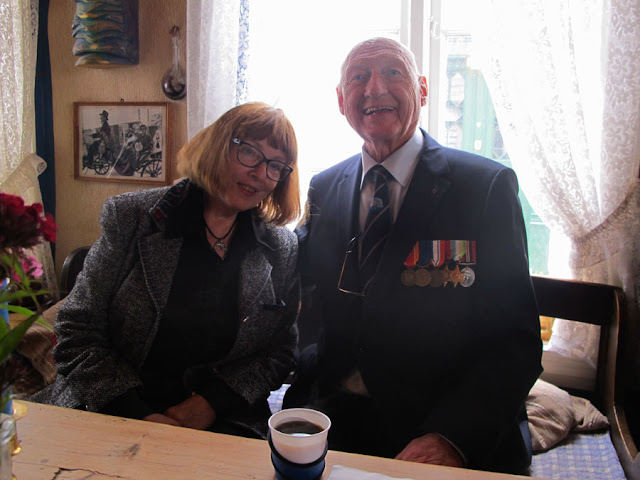 What a heartwarming story. I'm impressed by his health and vigor. With that happy smile, it would appear that he had a very good life when he finally got home.

So glad you and Serina had a chance encounter with this lovely gentleman.

Dear Felisol, what a privellege to meet a hero like that. He 's got such an impressive personality too, sitting ramrod straight in his chair.

Thank you for sharing Felisol, yo meet such interesting people.


And please greet your precious mother Happy birthday on my behalf.

This man has an amazing smile! He seems like a very positive person. I love the photo of you and he. Thank you for sharing this story. And an early happy birthday greeting to your mom.

A wonderful post, just in time for your mom's birthday! I loved the expression on his face. He looks like he was happy to have experienced all that he did, despite the hardships. He leaves behind such a priceless legacy for his daughter and the generations to come.

The waffle is delicious. Can you share some waffle recipes with me?

Love to you...
Lidia

I love this story Felisol, what a dear man, and what stories his life holds. We need those real heroes. I love the picture.

I have to admit that the picture of the heart waffles caught me up instantly!! My mom made those heart waffles all through our childhood. I wish I still had the waffle iron. :)

Please wish you mother a very special Happy Birthday from her Texas Norwegian friend. I will celebrate with her tomorrow as I think of her, and my prayers will be lifted on her behalf.

Love to you both!

I had to add another comment. After seeing the photo of your Norwegian waffles, I went to the grocery store and bought the ingredients I needed to make some for myself. Nothing like good comfort food!

Oh Felisol, thank you for sharing the story of this special man. He is a Hero indeed!
Happy Birthday to your Mom...I pray that you are getting to spend time with her.
Love,
trish

Oh Felisol, thank you for sharing the story of this special man. He is a Hero indeed!
Happy Birthday to your Mom...I pray that you are getting to spend time with her.
Love,
trish

I love his smile a midst of what he is been through. He indeed is a hero I find his smile full of gratitude in life. Love this post and extend my warmest Happy Birthday greetings to your mom! ^_^

A moving, amazing post! How lovely that this wonderful man spent time with you sharing his story!

A beautiful well deserved tribute to this wonderful hero! Great Post! A very Happy& Blessed Birthday to your wonderful mother ,too!

The soldiers, sailors and airmen followed orders, WWII being the worst and hardest test to follow and stay alive, then only by one's wits and the holding together of follow sailors, all working together to meet the mission - and getting out alive for all...

Convoys were sitting ducks for the patrolling U-Boats. To complete the missions and helping out those who needed the materials the convoys brought. This is a true gentleman who fought the odds that we may still hear his story. A true hero!

It would be a great honor to meet personally a true hero...

Great post! You are lucky to have met a true hero.

I'm glad he finally got the recognition that he deserved, even if it was too little too late. I hope hearing his daughter's pride, and yours too I'm sure, helps to heal his wounds.

Happy birthday to your Mom and a salute to your hero! Visiting from Ruby Tuesday.

Sliced Strawberries is my RT post. Come and see when you get a chance, thanks!

I think you have had the most rewarding 'hero' meeting experience a person could ask for. He's a national treasure :)

I was most interested to read about these men - Daag in particular. Such a sad but noble story.It is good that he was able to tell his story :)