Gunnar and I were out on photo safari in the neighbourhood yesterday. The  grave yards of the parish of Skaare have so many ancient head stones. Like this with a German text on it: 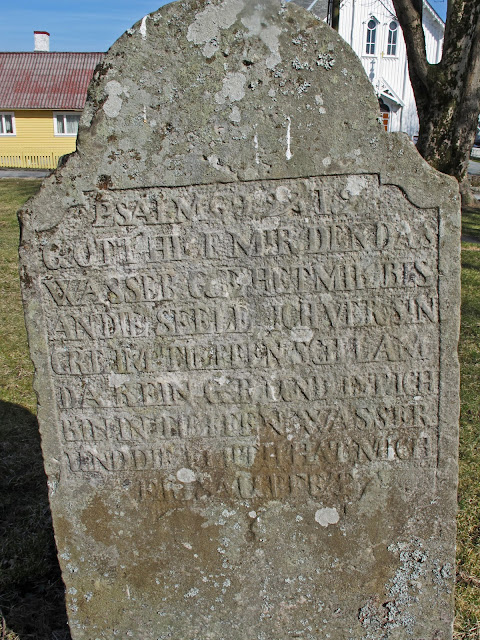 King James Version (KJV)
69 Save me, O God; for the waters are come in unto my soul.
2 I sink in deep mire, where there is no standing: I am come into deep waters, where the floods overflow me.
3 I am weary of my crying: my throat is dried: mine eyes fail while I wait for my God. 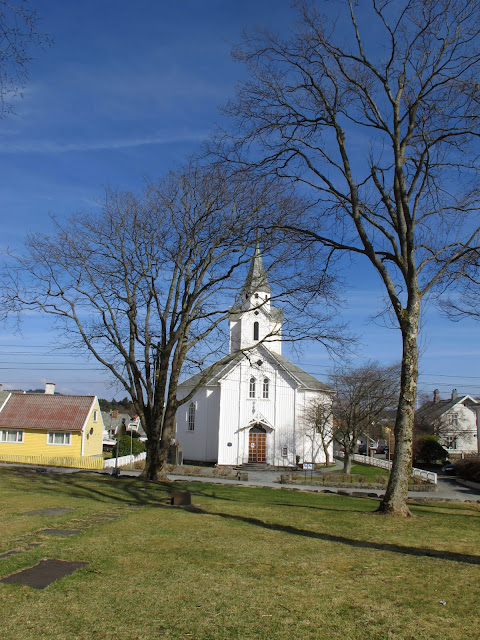 The old church, now gone. was situated about the place I was standing while photographing the old graves.
I wonder, were shipwrecked sailors resting underneath this special stone? 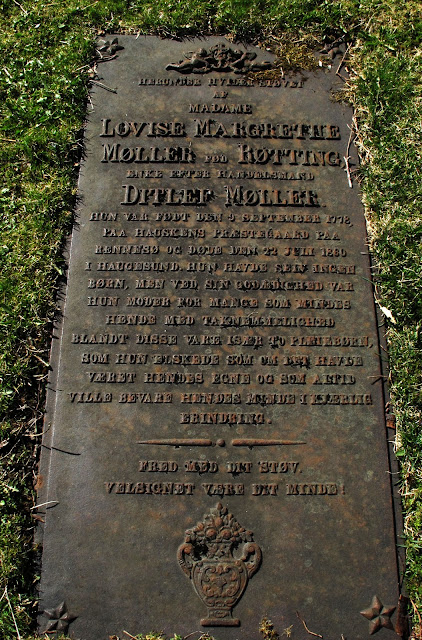 My friend Annie has a fine word for walking in grave yards. I hope she'll repeat it once more to me. I keep forgetting.
The text on this cast iron stone moved me deeply.
"Hereunder rests the dust of Madame so and so, widow after meerchant so and so.
She was born in 1778 on Hauske vicarage and died in Haugesund 1860.
She had no children of her own, but by her goodness she became mother to many who remember her with great thankfulness.
Among these were particularly two who she took in her care, and loved as if they were her own, and who always will keep her memory in loving recollection.
Peace be with thy dust.
Blessed by thy memory."

This happened at a time when Norway was among the poorest countries in Europe.I found it very moving. 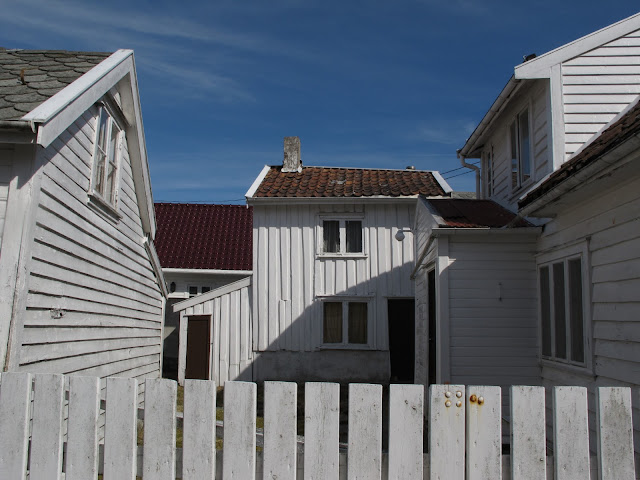 A special neighbourhood to the old church. The red roofs are for Ruby Tuesday. 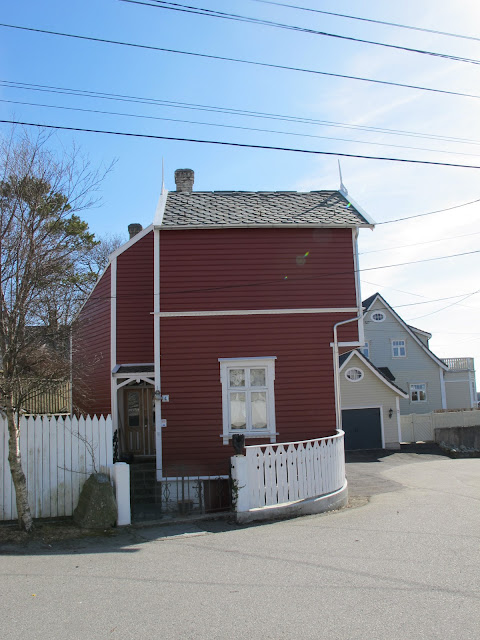 If one didn't have much land, but was in need of housing, one might build like this one century ago. 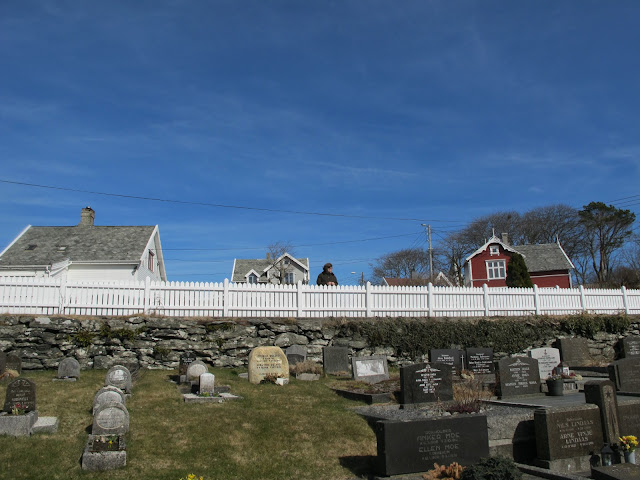 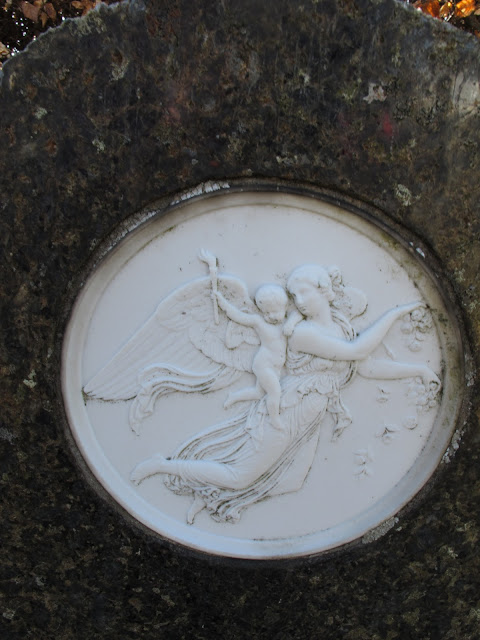 Beautiful out take of a headstone. 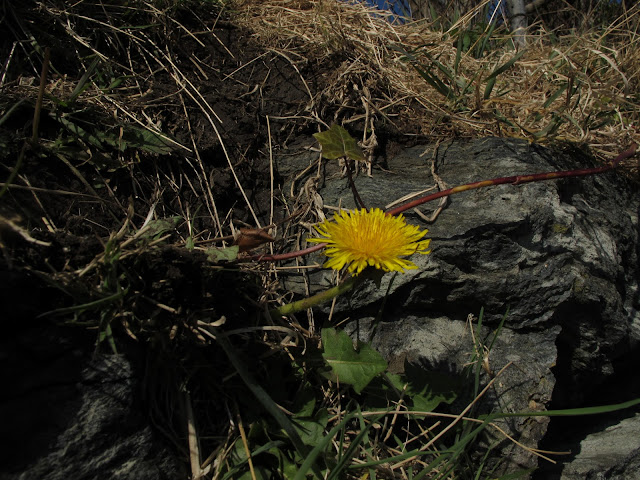 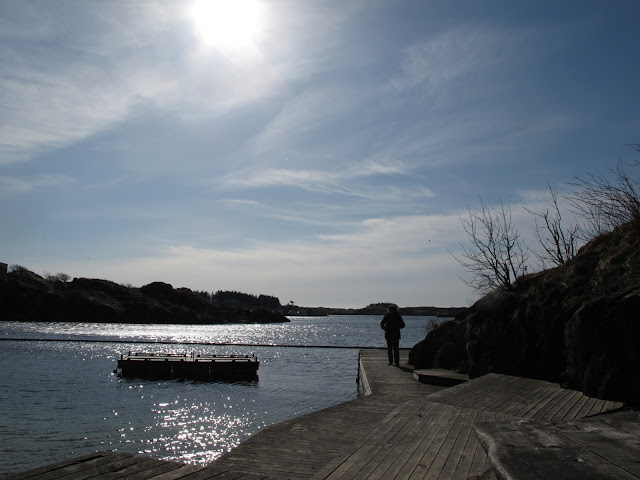 A stroll down to the sea, where children will be swimming in a month or two. 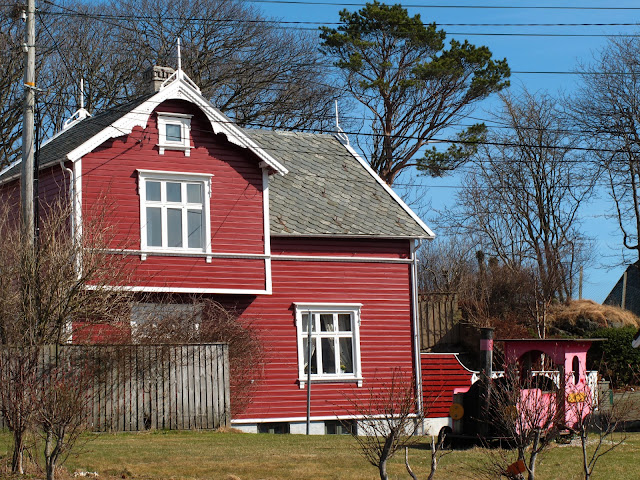 ...And back again, where the train is waiting. 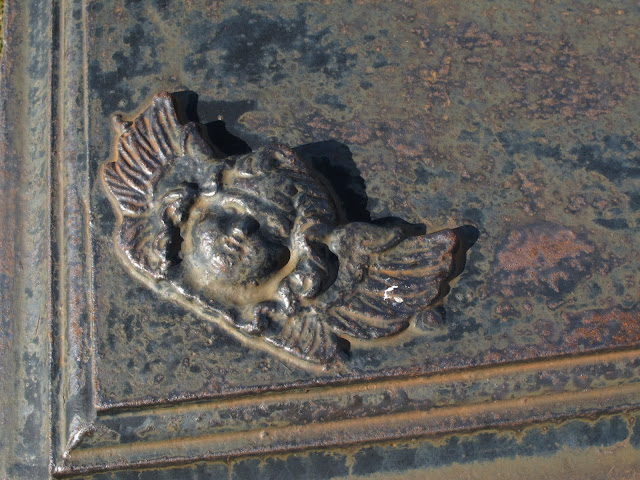 May your guardian angel follow you both this Monday, the Ruby Tuesday and evermore.

Many thanks for the visit. Yes, the English countryside is very beautiful, especially the New Forest – the setting of my latest thriller, ‘Retribution’, which you can follow from the photos on my latest post! And, as I mentioned here in the post before last, all proceeds from the sale of my novels go to Cudeca, a cancer hospice serving the local area which badly needs help in Spain’s economic crisis.

btw Retribution was this weekend in the top 80 ebooks in crime/psychology category on Amazon.UK and my earlier thriller, Soul-Stealer, in the top 70! More info & reviews on my website Nora Johnson. Also available in paperback and as iBook!

If you do decide to get ‘Retribution’, do let me know if the photos help with “being there” in the drama and seeing things through the characters’ eyes!

Norway has a lovely coastline - rough at times but a rugged beauty we all admire. Headstones can tell quite a story, as they were written in an age of no electronics...so the story had to be told completely yet briefly. I love that the woman had no children of her home yet was a mother to many. Faith mattered as death was merely a beginning to the faithful...I like the red house that was built to fit in a small plot, it is a beauty!

I wrote about headstones about 4 years ago: http://airhead55-ralph.blogspot.com/2013/04/ruby-tuesday-cornwall-crossing.html

That is a lovely memoriam for a lady with a mother's heart.

what a lovely outing for you and Gunnar. Was that one really a cast iron headstone? i don't think I have ever heard of that. The scenery is beautiful. You always have such a good eye for photos.

dear felisol...these are such stunning pictures!...what an awaking madame so and so when the lord comes through the skies to take her and all the other christians to heaven with him...it will be a glorious day!

you know that scripture verse you put in here...69 Save me, O God; for the waters are come in unto my soul.
2 I sink in deep mire, where there is no standing: I am come into deep waters, where the floods overflow me.
3 I am weary of my crying: my throat is dried: mine eyes fail while I wait for my God......has always moved me even when i was a child...it was the words of the lord jesus as he was paying for my deep sins on the cross and just to think of the deep mire that he was sinking into all my badness and yet he loved so much that even when the waters overflowed him, he never gave up..
oh what a saviour!

i like the simple white church and i my favourite house is the red inca brick where the people who needed housing were welcome.

and the most i feel good for is that you and your sweetheart were out on a walk and carrying your cameras with which your photos bring such joy to us my dearest friend..love terry

I've missed you! So glad to see you back. You and Gunnar's perspective show Norway to all of us, and you always seem to capture the unusual views. The cemetary shots are a reminder of how many times we used to play hide and seek behind the beautiful old stones as kids. If those stones could talk!!

So loved this post! A fascinating journey round your world! Love the old building design in answer to a small block. But most of all, I loved the headstone - mother to so many! Very touching!

Such beautiful photos Felisol! I always love the red you find. Did you know that red is my favorite color? I too like to read what is written on headstones. That woman's had a beautiful message about taking in children. My heart always warms towards people who love children. I also could not have my own but now I have a whole classroom full and love each one of them.

Hi Elise. Is this the word you are looking for?

Now I'm going to go back and take a closer look at this beautiful post.

The scenes are so pretty. Accepting for the color, the town reminds me somewhat of a town not too far from me called Sutter Creek. Unlike yours, mine is in the mountainous Gold Country east of us.

The red house reminded me of what we used to call The Little Red School House. In the 19C in the rural West, schools were mainly one room with all grades and just one teacher.

Your red house seems to also have a cute pink train engine in the backyard. That would be a fun play area for children.

Tapholphilia it is.
I've followed my mother to cemeteries, we call them churchyards, since I was a little girl. I liked to tidy up around the forgotten graves. Now graves are only enlisted for 25 years. It's so sad. The family can of course pay to keep the graves, like my family have done on both sides.
I like to visit mine on the graveyard. So many good memories, the fact that even if they have fulfilled their race on earth, we'll meet again.

Came back to reflect on the post palm 69 does not start with a positive note for a dying man. But it. Does show his trust in God. Throughing himself at the mercy of God. I love the houses and the seaßide