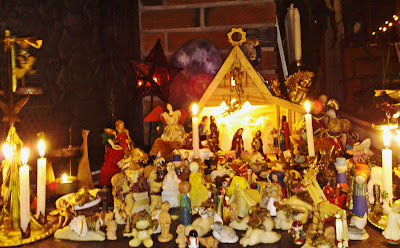 The crib is installed.
People from the ends of the earth are coming to Bethlehem.
To worship the King born in a stable.
I wonder if the herds ever forgot that glorious night.
Or if their wives believed them when they came home.
Faith is believing what cannot be seen.
"I just have a small faith, but it's my faith," a man said in a TV interview some years ago.
Guess I'm about there now.

What an elaborately beautiful Manger Scene!

And I love your outdoor nessi; I've never seen one of those before.

Dear John C,
A friendly comment warmth the soul.
The figures in our Manger scene are mostly homemade and therefore valued by me.
Children from my earlier work place, daughter and friends, even grown up friends.
This year I seriously thought about repainting the home made plaster
figures Joseph, Mary and baby Jesus.
Then I would have covered up the originals, painted by friends.
I simply could not do that.
The cow, camel and the little lambs are from Serina's play farm.
A glass puppy from my own childhood.
I am looking forward to having my daughter home, 'cause I know she loves to say hello to all the tiny figurines too.
From Felisol

Adorable mager that is.

And of the music is heavenly. Sounds very Celtic to me. i like the harp so much. What is that other instrument, looks like a bag pipe but its being played differently

Dear Amrita,
She does sing lovely, Sissel Kyrkjeboe.
And you are right, Amrita, it is a bag pipe, an Irish.
You know they hold the bag under the arm to press air in and out.
This is a Celtic accompaniment for a Norwegian song.
How very clever of you to notice.
From Felisol

I've never seen a nissi either but tha tis a very busy nativity scene. Your friends and neighbors seem to go all out for the holiday. I didn't realize there were so many believers in Norway.

Dear Jada's Gigi,
the picture of today isn't really a nisse scene.
In the middle of the stable Virgin Mary, Joseph and little baby Jesus are placed.

All the different people placed around the area (our fireplace) are supposed to symbolize all mankind coming to worship.
There's a lot of angles around too.
You can double click to see better.

I cannot judge whether Norway have many or few "New-born Christians".
What I know for a fact is that 82,9 % of the Norwegian population by free will belong to the Church of Norway, which is a Lutheran Protestant church.
There are also a least ten different "Free churches" in our city alone. 30 000 inhabitants.
(A growing part of muslim immigrants are among those non Christian members of Norwegian society.)
All churches are supported financially by the government.Our king is head of the church, and we have a own church minister in the cabinet.
Our royal family are active members of the church.
People are being baptized, confirmed, wedded and buried from church. Everybody has to act by themselves to become members of the church.
Non-believers have been campaigning for four decades to get people to leave the church. So far they have not succeed.
The advent stick, which I have written about lately, is a sign that more people than one should imagine.

The nisse, on the other hand is a reminiscence from prechristian time.
He's a little fellow, living on farms, treated with porridge and old fashioned goodies Christmas eve.
He doesn't really bring gifts, but good times to the farm.
He traditionally wear this long, red knitted cap.
The posts of December first and forth displays different copies of a nisse.
My Mom also painted a nisse on my Ruby Tuesday mug.

I think that school education and confirmation have a lot to do with Norway having many believers.
Faith comes from hearing.

That's why I support Church of Norway.
If no one preaches, we will soon be back to heathendom, I fear.

Faith...believing without seeing. A small faith, but it's my faith. I like that.

Dear Sioux Sue,
I would like to be stronger, to be more firm, have less crack ups,living a better life.
All those things that speak against me in sleepless nights, and sometimes also in bright daylight.
I cannot crave to be what I am not..
It's good to read that you like me, who I am, anyway. Thanks
From Felisol

Alas, I do not read German. My father spoke very broken English until he was 16, as did his sisters, but I did not learn to speak German...should have, but didn't, I think.