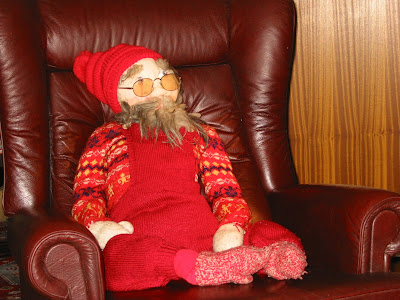 First day of December also means a special Advent series in Children's TV. For a good many years Norway only had one TV-channel. Six o'clock is children time. I always used to watch TV together with my daughter. Honestly I watched the Christmas series long before she was born.

I have two favorites; Christmas in Shoemaker Street and Christmas in Blue Mountain. Both are straightforward about Jesus being the reason for the Season. Lots of good songs and a variety of nice people and nisses. In Norway there are no Santa Claus, but the Youle nisse. He's as old as the trolls and goes a thousand years back. The nisse most often lives in the barns on farms, but in Bluemountain the Bluenisses live. They are a rather new invetion, but have captured the minds of young and old.
I am so looking forwards to meeting them again this afternoon.
Lagt inn av Felisol kl. 1:35 am

The first video did not show up the the other two were sweet.This is the first time i heard the Norwegian language.

I remember last year you wrote about the nisse and you had little figures in your garden also.

In India Christmas is borrowed from the west, the british transported it.But its good.

DEarAmrita,
I have retried the videos on my machine. They work here, both of them. Guess they maybe need some time.
I have added youtube songs on the previous Advent posts as well..
Serina is not doing too well, but she is a trooper and is not giving in, but fighting back..
From Felisol