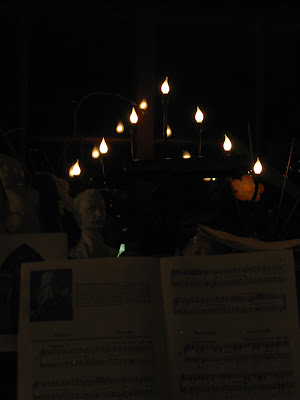 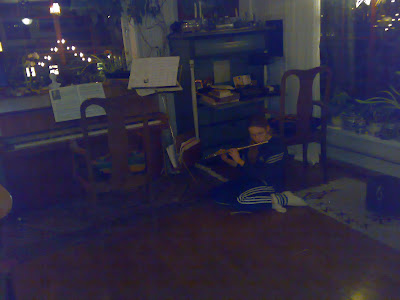 Today I've read about Hanukkah and the light feast with the nine grained Menorah.
There are also a seven grained Menorah, more common among us. I've come to think that our Advent stick, also with seven lights might be a descendant of the Menorah.
All this philosophizing just because Amrita asked about the origin of the Advent stick.
Just now I wish I could take you all for a tour around town.
Almost very house in almost every room there is an Advent stick burning day and night.
Even in our Chinese Restaurant.
I like to imagine that God and His Son are smiling.
Despite depression, war, terrorism and other cruelties the average man is letting his Advent-sticks burn a whole month.
Lights of hope, lights of peace.

What beautiful thoughts Felisol. This is a wonderful time of year when it's hard to ignore the Father and the Son! It would be fun to stroll about your town seeing all the advent candles lit...

Hi Felisol, I'm glad that Advent is all around you. I don't think we are so 'religious' here in the states. We almost have to go to church or read a devotional to run into Advent. We seem to be on to 'how many shopping days until Xmas (many still do say Christmas)' instead.
I use Xmas some of the time. When I do I alway tell myself, although not necessarily others unless they ask, that the "X" is to remind me of how Jesus died on the cross for us. That lasts in my mind a lot longer than old hat 'Christmas'.
And it makes me think of the slogan, "Keep Christ in Christmas."
..
Now I'm going to look at your Ruby Tuesday. You came early tonight, I finally got it up. I see you did yours Monday. Some days I do that.
..

When I use to home school my children we would celebrate Christmas traditions from our varied heritages. One year everything was German themed, another year Irish, and so on. We even studied about Hanukkah, set up a menorah, made ethnic foods, and played games though not being Jewish. Books were checked out of the library with recipes, traditions and decorations. I miss those days. Your Advent sticks must shine throughout your town so nicely. I would love to study about your Christmas traditions. Hugs

Thank you Felisol. I can see what it looks like.

You are right it does look like the Jewish Menorah candlestand.

Each country has its own unique celebration and meaning behind it and that is what I like so much...unity in diversity...like the colots of the rainbow.

Thanks Felisol, I'd not heard of the Advent stick before; it's a joy to see how worship of the Lord permeates society in subtle ways.

Beautiful season! and I know it must be lovely in Norway. As Jim says, Advent is not the big deal here in the states as it is there apparently but still...so beautiful where we do find it and it is never too much to be reminded of His coming.
I also love PS 139. :)

I would love to see your town with those Advent sticks. What a wonderful way to celebrate the season of expectancy.

Dear ellen b,
I should probably make a short video take of the adventsticks.They are moving.
We don't have much of American outdoor decoration though.
On the Island the fishermen have been fishing from Seattle to Alaska for generations.
They are more Americanized decoration wise.

Dear Jim,
Well, you had a good explanation of the X-mas word. I have been wondering.
Christ's mass sounds best in my ears. That's probably because the Norwegian Calendar still have a lot of mass mark's days (After being an official Protestant country for 500 years that is.)

When teach lay out her Ruby Tuesday Mr. Linky it is about 23 or 11 Monday evening in Norway.
I often sit up until3 in the morning, and next day (Tuesday) is my hiker day. Turid will be at my door 10.15.
It is fun though, don't you think?


Dear Mrs. Mac,
you are a thorough teacher as in everything else you set out to do.
I am impressed.
Norwegian schools teach Bible history, which is The Old Testament and The New, then religion history, but not much about the religious seasons, and that's a shame. Only through knowing the feasts one gets the spirit of the worship.
Your children are well prepared for life, that's for sure.

Dear Amrita,
unity in deversity, that's a accurate formulation.
I must memorize it.
Your pupils too and an engaged and well educated teacher.
I am sure many remember you with gratitude.

Dear John C,
I am glad to hear that an historian and author too likes to read about the common life in far-away land.
Actually I am thrilled.

Dear Jada's Gigi,
Christmas is over commercialized in Norway too.
The sociologists say we are just 20 years behind the USA in development.
I think it will take more than one generation to erase Advent though.
Advent is the beginning of the Church year and old marksdays tend to remain.
The churches are fuller than ever all December.
The rest of the year is rather miserable.
As long as our common songs, our homely traditions as well as the public are centered around Jesus, the reason for the Season, I think we will survive as a Christian nation.
Strong forces are trying to ruin it though.