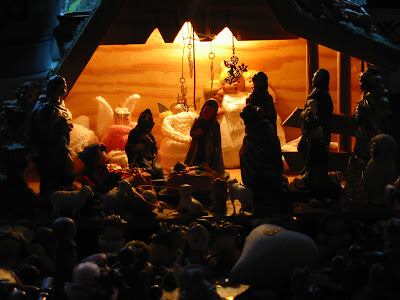 1And it came to pass in those days, that there went out a decree from Caesar Augustus that all the world should be taxed.

2(And this taxing was first made when Cyrenius was governor of Syria.)

3And all went to be taxed, every one into his own city.

4And Joseph also went up from Galilee, out of the city of Nazareth, into Judaea, unto the city of David, which is called Bethlehem; (because he was of the house and lineage of David:)

5To be taxed with Mary his espoused wife, being great with child.

6And so it was, that, while they were there, the days were accomplished that she should be delivered.

7And she brought forth her firstborn son, and wrapped him in swaddling clothes, and laid him in a manger; because there was no room for them in the inn.

8And there were in the same country shepherds abiding in the field, keeping watch over their flock by night.

9And, lo, the angel of the Lord came upon them, and the glory of the Lord shone round about them: and they were sore afraid.

10And the angel said unto them, Fear not: for, behold, I bring you good tidings of great joy, which shall be to all people.

11For unto you is born this day in the city of David a Saviour, which is Christ the Lord.

12And this shall be a sign unto you; Ye shall find the babe wrapped in swaddling clothes, lying in a manger.

13And suddenly there was with the angel a multitude of the heavenly host praising God, and saying,

14Glory to God in the highest, and on earth peace, good will toward men.

Deilig er Jorden
The longstanding favorite hymn of both Concordia College and the Lutheran church in general is Beautiful Savior. It is set to the tune of a Norwegian Christmas hymn called Deilig er Jorden, or Beautiful is the Earth (or maybe in this family we would say Beautiful is Jordan!). I translated that several years ago (1971) and the translation was printed in the Sons of Norway newspaper.

Inspires a hymn, the soul’s deligh;

Leads to the land of heavenly light.

Seasons of life shall come, Surely as time rolls on

Praising our glorious walk with God.

Heavenly cherubim Sing to the sons of men,

Echoing tidings of joy on high;

God’s peace to all mankind, Gods’ peace be yours and mine;

Salvation unto us draws nigh.

"Image of majestic power Inspires a hymn, the soul’s delight; Through earth’s fair heritage, Our soul’s sweet pilgrimage Leads to the land of heavenly light".

Powerful words. I've never run across this hymn before.

I'm glad I ran across your blog a few weeks ago. You educate me. Thanks.

A couple of weeks ago, our Pastor shared about Ceasar Augustus, some interesting facts. Coins that were made duirng that time naturally bore his image. The interesting thing is what was printed underneath!

There was another and I'm drawing a blank! It was interesting that Augustus made these claims about himself and the Bible proclaims these same things about Jesus! Augustus was paranoid and power hungry, killing even his own family if they were a perceived threat to his rule and power. This is why he casually had all of the male children under the age of 2 killed because he feared the rise of a new King. For a History nut like myself, this is fascinating stuff.

Saying a prayer for you and your lovely family to enjoy the Christ-Child's birthday!

Merry Christmas across the sea!

Felisol, Luke 2 are the passages of the Bible that my grandpa always read each Christmas Eve when our family got together to celebrate. Now my dad is the one who reads it. Although I'm on the opposite side of the US, I read it for myself. I'll be going to candlelight service at church tonight and then making a quiet dinner at home with Greg. May you and your family have a special and blessed Christmas this year. I'm so glad to be getting to know you, my friend.

Dear Felisol,
As I read your passage from the Bible I could not help but think of Dad Ljung and in my mind's eye that he was reading to the family circled around him.

You know Felisol... we are always complaining about taxes but just think if Cyrenius had never passed that tax law, then Mary and Joseph wouldn't of traveled to Bethlehem where our Lord and Savior was born!
Just imagine! God's timing is never out and He is the one that controls even the governments!

Hymns like these are robust, meaningful and doctrine based.When we sing them we take Biblical truths into our minds as well.
Thank you for sharing this Fesisol.

A very blessed Christmas to you, Gunnar, Serina, Mother and Liv and Trudi and Brother Ole.

Felisol, my prayer for you this Christmas is that you will see the Lord's hand at work in every situation. Knowing that He is in control - our sovreign Lord - seeing things that we do not see - and working all things together for our good.

Have a blessed Christmas!

Thinking of you on Christmas Eve, my dear friend on the far side of the sea.♥ May your Christmas be filled with the joy of Jesus, the hope of His calling, and the peace that passes understanding. What a wonderful Savior we have!

Beautiful, Elise. Merry Christmas to you and your whole family.

and God's blessings on your home!

Felisol, have a very Merry Christmas. I like your Christmas story, I will read it with family today.
Also, Happy New Year (hint, Sunday Mrs. Jim and I bought new swim suits)!
..

Dear John C,
As soon as possible i shall upload the tune to the hymn. Tt's so mighty, gives me gooseskin every time I sing with. At the end of Mass Christmas Eve the congregation will always expect to sing this hymn.
The tune originates from year 1100.

I am glad I met you too, John C.
You have broadened my horizon and made my heart warmer.

Dear Constance,
It is provocing the the rich and mighty that the savior was born in a stable and dead on a cross.
what's more; he arose and sits by the right hand of God Almighty.

I somehow can get their rejectment and fury.
All the worldly things suddenly are made to nothing.
It cannot be easy to bend down under the low stable door to worship a child in a crib.

How lucky we are that someone showed us the road to Bethlehem.

Dear Debbie,
I am writing early morning the 25th.
It is a good and comforting thing to uphold traditions, even though the times and circimstances changes.
We heard Luke 2 twice yeasterday first in church and the between
main course and dessert.
My brother is the one reading from my Dad's bible.
He had a hard time while reading.
He made it,even the extended version.
It is a wonderful thing to pass on.

Thankful for your friendship...blessings on you and your family this Christmas. This was a beautiful post indeed.

Beautiful words to the hymn and beautiful to hear it sung. It's interesting that it's associated with Christmas for you because I learned it in Sunday School with much less majestic words. It was "Fairest Lord Jesus, ruler of all nations, oh Thou of God and Man the Sun, Jesus shines fairer, Jesus shines purer than all the Angels heaven can boast." Next verse goes on about Fair is the sunshine, fairer still the meadows... I always thought the words seemed so mush less deep than the song. It was beautiful to hear it sung with such depth and reverence. But I'm rambling. I hope you had a wonderful Christmas. Thanks for the link over at Raven's Nest. I followed it and got some messages in Norwegian which alas I could not understand. I think they were telling me my computer doesn't have enough speed. I have cable but cable here in the middle of nowhere is kind of just a shade above dial-up other places. Dial-up here in Hancock is pretty much all you do... dial up and disconnect and dial up again. But I ramble again.

Merry Christmas season! Off to read your other posts.

God's blessing on you and your family through the Christmas season and a very happy New Year! Ahh the beauty and majesty of Luke 2.

Dear Felisol. Nice to hear from you so early in the morning!.
I go quite often to your Norwegian blog. It has so many nice pictures of your family!
I am not smart at all. I just went to Google language tools to write that letter!
I always go there also to translate Justin's nice comments to you..
I wasn't sure that you saw it...
I think I will get an hour sleep before I face the day
Have a blessed Lord's Day...Love Terry

Belated Christmas greetings to you and your family Felisol ... your blog posts this past month have been somewhat of a 'time capsule' of events and traditions. You may need a break for a while, eh? A new post each day is out of the norm for you, but much enjoyed by your readers :) ...Have a Happy New Year celebration (are you still in celebration mode?;) The week after Christmas is my time to unwind. We have had about five feet of snow and it's just the first week of winter. Thank the Lord that it has warmed up above freezing and some of the snow is melting off our roof. Blessings to you in 2009. Hugs,

Felisol, thanks for commenting on my blog - hope to see you on Ruby Tuesday! Happy New Year! :)