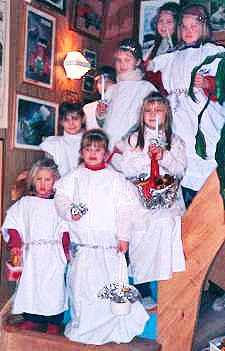 I remember celebrating St. Lucia in Sons of Norway. I have a picture of my little niece dressed in the outfit with the candles on her head. I guess I have to look through my photo books and finally post something on our Norwegian American Christmas this next week. I love to check your blog each day. Hugs to you Felisol!

Dear Debbie,
I bet you was chosen to be THE St. Lucia.
It's traditionally a fair-haired beauty.
I'm looking forwards to seeing your Norwegian/American Christmas.
That's some tradition and heritage to remember and take care of.
I recently read that nowhere are the Christmas so important feast as in the Nordic countries.
A farmer and hunter people struggling to survive the cold and dark mid-winter simply needed
to occupy thoughts, strength and mind on the light and coming of the New Times.
That's also why the Scandinavian have kept the ancient word jul for the celebration.
From Felisol

Thanks for sharing some of your tradtions with us!!

You will be very surprised to hear that i used to sing that song in my chilshood.

My German music teacher , Sister Elizabeth (nun) taught us that song in English - I don 't remember the words though.
She used to play the grand piano and we sang along.
I suppose its sung in Germany too.
This is great Felisol.

Dear Amrita,
how nice. St. Lucia is celebrated on three continents.
Yes, I am surprised and happy.
From Felisol

Hi Felisol, I'm back because I wanted to alert you that I have something for you on my Saturday Heart Choices post. I value you as a new friend!