We grown-ups always say that Jesus is the greatest gift of all, and that other gifts does not matter. That's not entirely true. The unexpected gift warms the heart in the cold winter night.
The other day a pink envelope came in the in the post.
A book. The Fatherless written by Salme Orvokki Pinola.
Saija's Mom has written this novel about immigration to America. The fathers who went out to gain money, when times were tough in the homeland.The moms had to take care of the children as best she could.
Much of it also a story about my grandmom, at least so much that I can easily relate to it.
This book was written with Saija's mom's heartblood. It has also been transcribed into a play.
I feel so deeply honored receiving it. 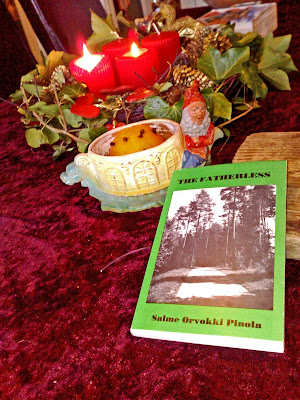 Two of my friends worked nightshift together while I was ill. One had a her husband cut these 1m tall figures. Nissegirl and nisse boy. 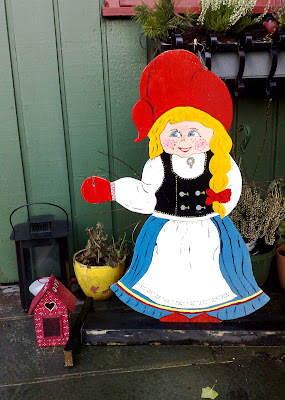 They then painted one each and gave me for my birthday15 years ago. They are still a must when I decorate for Christmas. 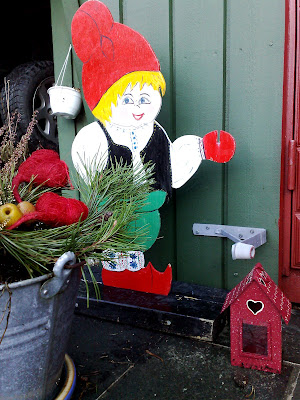 The painting making a strong wintry landscape in the background is a gift from multitalented Kirsten.
I use it for making the right environments for some of my nisse figures.
The red and blue ski-nisse in the front are gifts from Serina.
Der Weihnachts Mann made of wood came from German friend Christa more than 20 years ago.
We met 40 years ago when she worked for a year in Norway and have kept in touch since then.
Every Christmas we are sending each other gifts.
These gifts are creating bonds of contact, that's for sure. 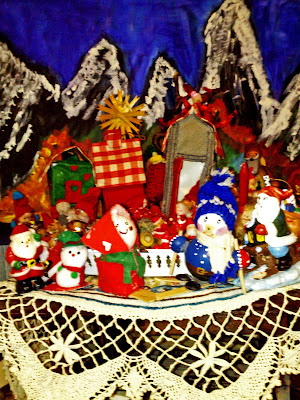 The tiny chandelier to the right with glass prisms
was a rae gift from my Mom's eldest friend. She would have been 101 this January had she lived.
The two ceramic donkeys was secretly placed on the nightstand after a dear friend had stayed with us for a sleep-over. The golden book from which the sheep are eaten (I found Thy words and I ate them) is a gift from my sister in law. A letter press actually.
The red haired angle sitting left is made by Serina in her Barbie period. One of my favorite angles.
For sure- a gift can be a joy for many years.. 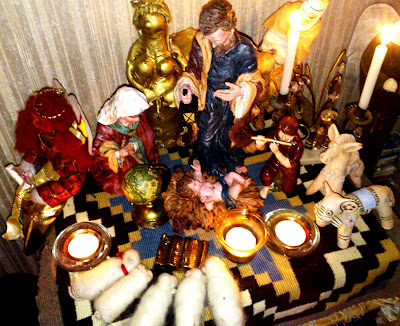 I found two variatios of this julesang. Didn't know which to choose, so I went for both.

BEAUTIFUL ,THE AZURE SKY
Beautiful, the azure sky
Draws our gaze with longing eye,
There the golden stars are blinking,
Stars are smiling, stars are waving:
Earth below and sky above.

In that midnight Christmas sky
Every star appeared on high,
One star yet was burning brighter,
Clearer, stronger, yet more radiant:
Light as from the sun itself!

Dear Felisol
It is late but I wanted to spend some time with you before I go to bed. These precious gifts you have received from your beloved friends and family are far more better than gold.
I hope that you receive the little gift that I got for you. I think that the Canadian mail needs to speed up a little.
Felisol, you know how Mom Ljung loves "Bonanza"so much? Ask her when you see her if she remembers the story about an elderly man who just had his house full of what other people would think was nothing but junk. One day the wife decided it was time to clean and as they went through all that stuff, almost with each piece there was a story behind it. I forget what tne man worked at but he never seemed to make much money. People would pay him with "stuff" instead. Well how the story ended was the man saying, "These are my trophies, the gifts from a life time of giving myself to others and never could I part with them, wife!"
And his wife strongy agreed!
Last week when I took pictures of my walls Felisol, almost everything was a gift that hung there and I would never trade them for anything.
I think that the Lord Jesus feels tbe same way when we present our gifts to Him, the gift of our singing and the praises we offer, our bodies offered to Him, and the giving of our hands, feet and tongues to help others!
I agree with you Felisol Jesus strongly agrees in gifts!..Love Terry

The gifts we receive fdrom friends and preserve tell us so much about our ties and our relationships.

Each object has meaning.

Your home is a like a nisse wonderland.
I wish there were nisses available in India, so I could send you an Indian nisse!

you are right. sometimes a gift warms the heart and lifts the spirit...and binds our hearts to the giver. good post!

Dear Terry,
I agree, Some gifts, given from the heart are worth more than money can tell.
Your walls resembles much those of my Mom's. She has her life and her loved once with her in her living room.
Every item tells a story.

There's a Norwegian psalm about that.
"God gave us his own son know, by Christmas time. Therefore a praise goes over the whole wide world; Giving is thy cause on earth, Give and give with joy.
Give till you become empty and poor. Give thy friend and foe, give them of your best.
Give till you becomes rich and warm,
richest finally."
Hmm. A simultaneous translation.
I think you get the picture though.
Giving is good for us, and so are receiving gifts that come from the heart.

Dear Amrita,
You are a good rolemodel to me.
Writing about your home, your family, your church and that big things goin on in India, has given me a much broader perspective of what India is like.
That is a huge gift.
In a book from the saga times called the King's Mirror,where a king is teaching his son, the king says," Better burden you do not bear than man-wit much."
(They used letter rhymes, b b b)
I also think king Solomon said something similar about knowledge.
You have given me the gift of learning to know India.
That is precious.

I love to visit your blog and check out what's happening each day in your life. What special gifts you've received. I'm sure they were given in love.

Dear JaDa,
Gifts and regifts preserve the friendship, my Mom use to say.
I think the balance also is of importance.
Then there is my favorite from the Bible.
Ecclesiastes 11
Bread Upon the Waters
1 Cast your bread upon the waters,
for after many days you will find it again.

2 Give portions to seven, yes to eight,
for you do not know what disaster may come upon the land.

Dear Debbie,
you got the point. I wrote about gifts given in and confirming love.

I think I've missed your birthday, dear friend, so let me send a hug and wish you a most blessed year! Hope your birthday was filled with love and remembrances. ♥

Dear Vicki,
I was blessed and had a wonderful day.
Thank you for caring.
FRom Felisol

i thought you could relate to the story ... hope you enjoy the read ...

Dear Saija,
Yes I can easily relate to your Salme Orvikki Pinnola Mom''s story.
I haven't finished the book yet. I want to really take time to enjoy.
It's laying here on our table and the mere sight of it is making my heart warm.
From Felisol