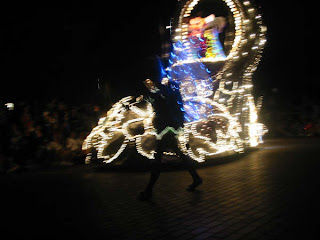 Daughter Serina was on a tour to France with a ten-sing choir four years ago. They had of course to visit Euro Disney outside Paris. She did not meet Tinkerbell in "person", as elves are small and elusive creatures, but she managed to take a photo of her favourite as she was leading the final parade in the evening.
She and a friend even bought Tinkerbell magic sticks,- and it's still working. 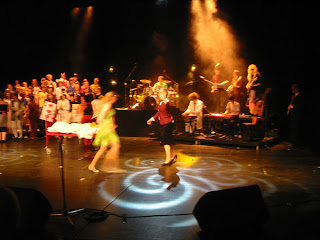 At the age of eighteen Serina joined the drama group of the choir. They got to create their own roles in the play. Her friend at the picture was a prime ministeresse, Serina flew around in her green outfit ..as Tinkerbell. Quite amusing, actually. 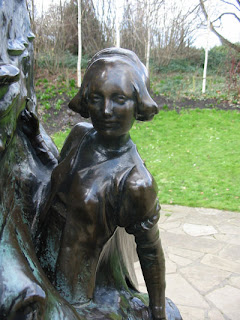 The author of Peter Pan, J.M. Barrie, ordered and paid for this statue of Peter Pan and his friends and had it placed in Kensington Garden, London. 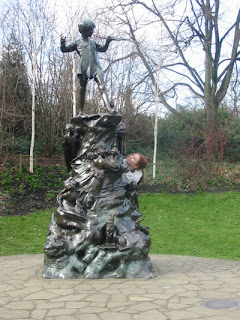 Serina is embracing the statue at her seventeenth birthday.
I learnt to know Tinkerbell as I was sitting on my father's knee while he read the stories of evil captain Hook, Peter Pan and the naughty-sweet Tinkerbell. I even got a picture of her on my bedpost.
Serina always goes deeper into the material. She has read her Barrie book, bought the film, (or made us buy it) and sought out the places where to find her. (Mind you, she acts in this way whatever her interests may be. We had to go to Oxford and visit Christ College where a Harry Potter movie was partly made.)
About her fascination with Tinkerbell she says:"She's tiny, but so tough and determined. The fairy's size prevents her from holding more than one feeling at a time. But she sticks to and acts to that feeling."

I am thrilled by my daughter's ability to be engaged in music, literature or whatever she stumbles upon. Her way of giving it life and love.
There are people who only believe what they can see.
And there are those chosen few, who can see what they believe in.
Lagt inn av Felisol kl. 10:47 pm 4 comments: