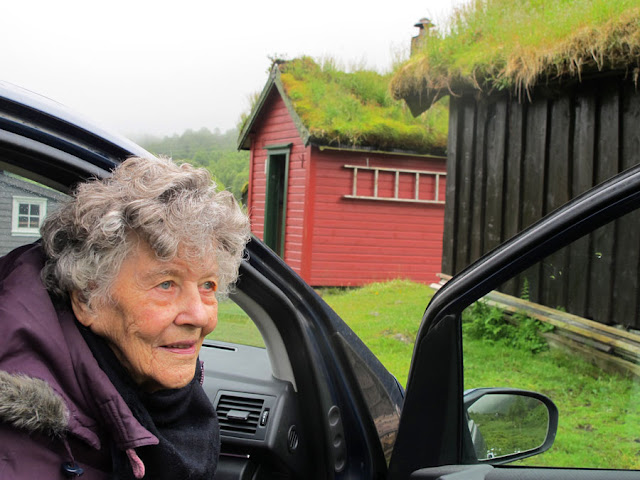 "For every season there is a time,"the Preacher said.
I'd like to add, "There are good times seasoned, even in the darkest of moments."
Back in 1933 my Grandfather let build a small hut, more like a shed, for my Grandmother, to help her get away from the smog and relieve her asthma. He run his own bus and cab company, and money was indeed very tight during the depression, but his love for my Grandmom overcame the obstacles.
My Grandmom died shortly after, but the hut became a beloved gathering place for the five kids and later on for their children and their children's children. 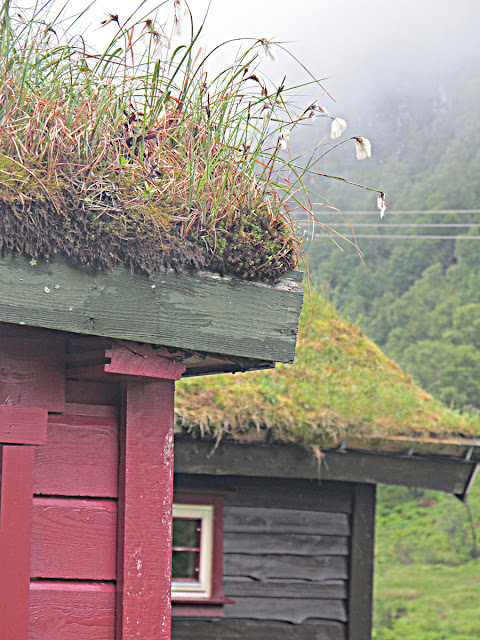 Just before my uncle Leif died, he saw too that the hut was to legally belonging to the Ljung family as long as it still was standing.
We don't own the plot, so if it falls, it's gone forever.
During the years family members have taken their turn to see to that the hut did not fall apart. 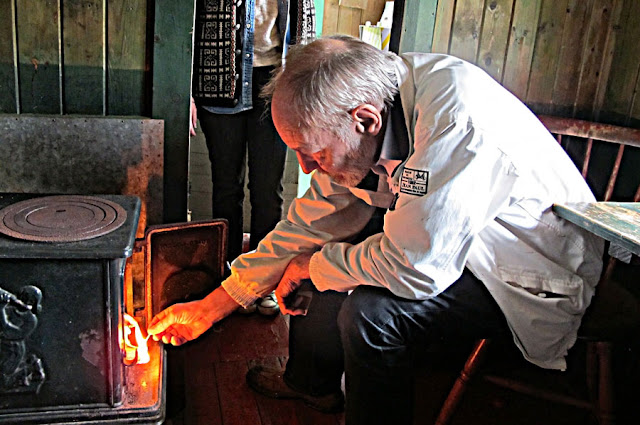 A couple of years ago my cousin Edith and husband Lars made a thorough restoration to rescue the little hut. They did it so nicely, one can hardly see the changes they had to do. Inside it looks exactly like it always has done. Every plate, every  jug, book, crayon, chair, pillow has its own special history. 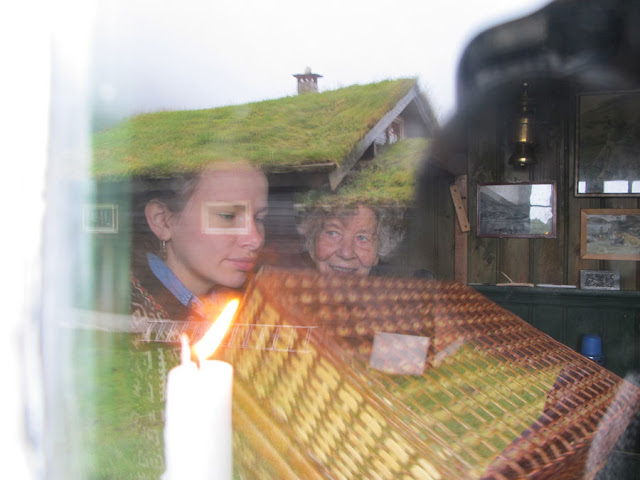 I had to stand outside to get an interior picture. The neighbor hut is reflected in the window.
Here my parents celebrated their honeymoon 63 years ago, and here my mother longed to come for her 87th birthday on July 2nd.
The hut is situated 440 yards over sea level, but a new, private road made it possible to drive almost to the door. 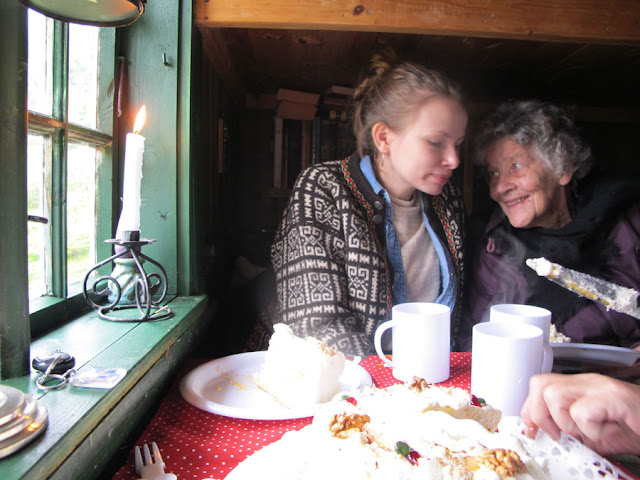 We brought birch logs from home and made up a cosy fire.
Grass and even moor wool frowing on the roof.
Heavy fog lay along the valley, but we didn't mind. Being together inside, sharing old memories and making new ones, was what counted. 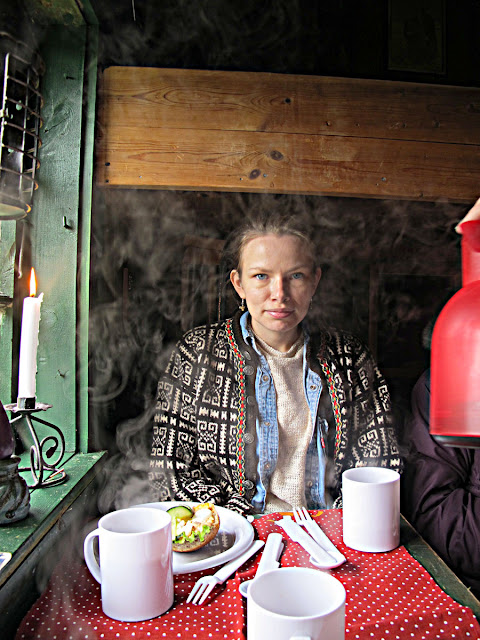 Sandwiches, coffee and cream cake was on the menu. Even though they were bought at the local bakery, they tasted excellent. The home brewed coffee was steaming hot. 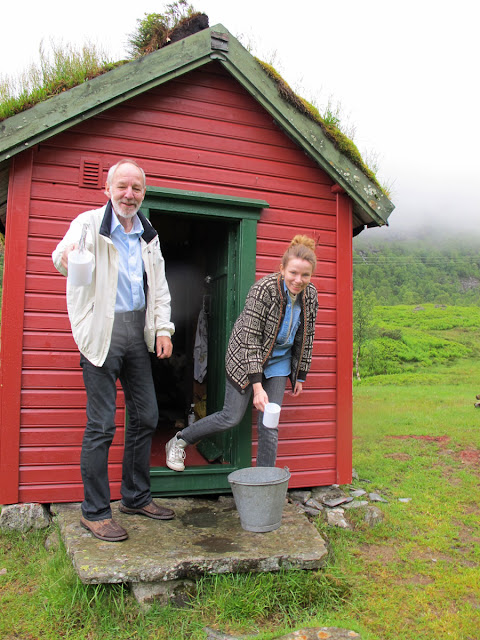 Throwing water at the photographer,- what fun sport!
As you can see; the hut is small as small can be. The giant paving stone is place there by my uncle Kaare. I never understood how he managed it. No horse, no crane. 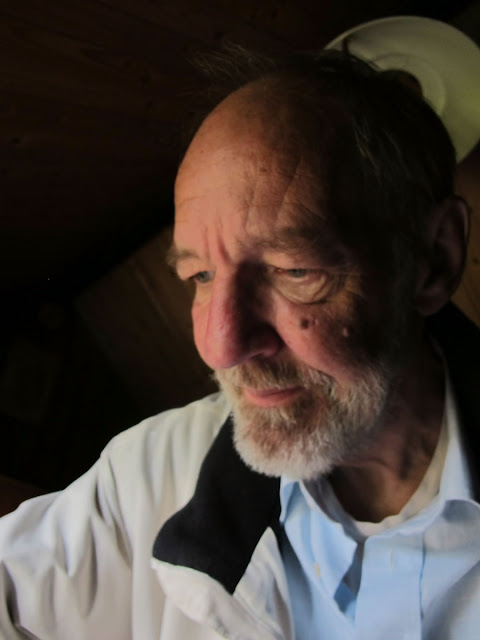 Brother Kel bravely fighting his daily migraine. His nose has become just like our Grandfather's.
Year follow year and we don't even realize that days coming and going are life itself.
This very day will shine like a bright star on the sky of memories.
5 days after my mother broke her arm and hurt her eye.  One more exhausting trip to the hospital. even so; her birthday in the mountain is even more valuable. This was what we were talking about while waiting 6 hours for the doctor to come. We were looking at pictures, chuckling of joy.
Thanks for all your heart felt prayers. They were heard.