THE NEED TO BELIEVE 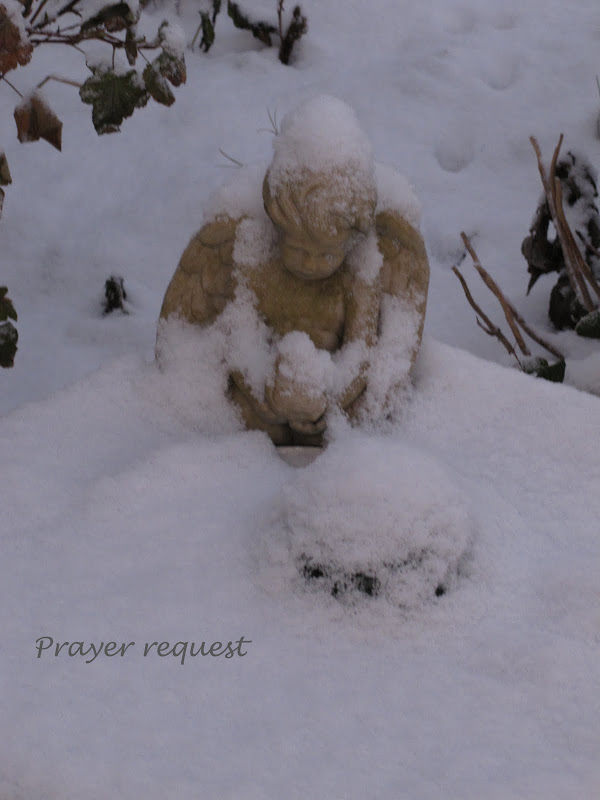 Prayer and the faith in a living God, who always wants the best for his children, is implanted in me from I was a baby.
Nevertheless, I tend to want to fix my own life as best I can.

"Mother, don't pray for me, I want to win this tournament by myself," my brother instructed our mother as he was entering a major chess competition. With his sense of fair play, praying to win was equal to cheating.

Yesterday not only did I pray, but I engaged my entire family and the circle of blog Sisters of the Traveling Scarf to pray for daughter Serina's safe return for Christmas.
She rode her little car over two mountain ridges, via three car ferries and two under water tunnels ( running three hundred meters under the fjords), for 12 hours, through storm and ice in arctic darkness, and she turned up at our front door the very minute she was expected. Completely safe and sound, while four buses and a trailer were blown off the road in her track.
Seldom have I felt so small as when following the news on the internet. Seldom have I felt the blessing of my tiny, wobbly belief so complete. I couldn't to anything, but leave it all to God, his angels and my co-prayers.
I needed to believe then and every day.
The- nut- shell- sailing- on- the- Pacific- feeling, is a spiritually healthy experience. 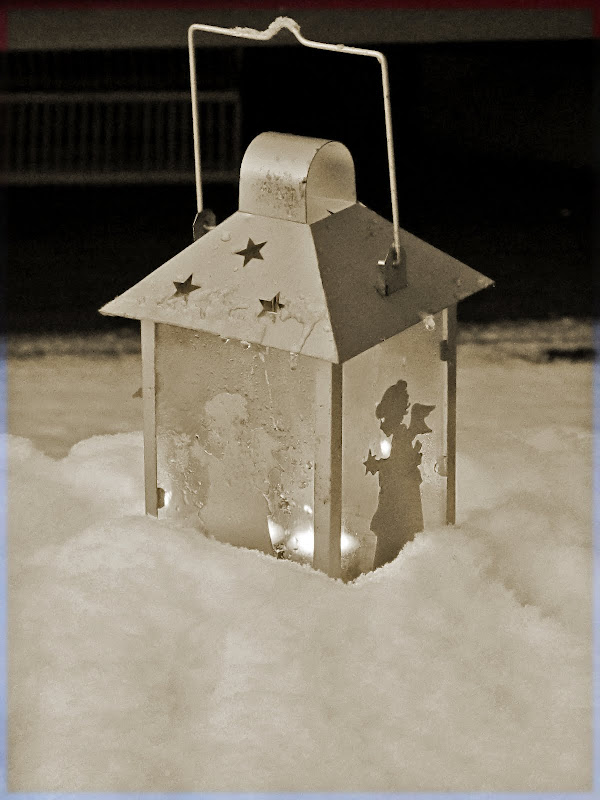 My best wishes for Christmas and the New Year.
May angels surround each and everyone of you, now and always.
From Felisol 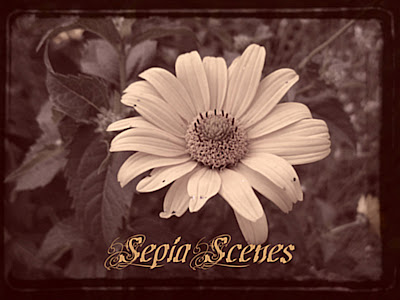 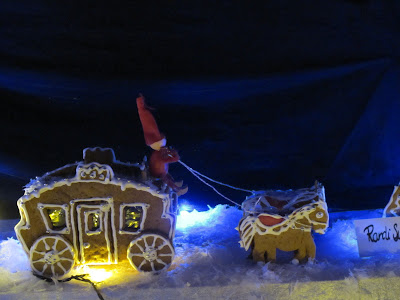 People in our town are very much like the average Norwegian.
We don't do much new stuff around Christmastime; we are too busy repeating our traditions. This provides a feeling of stability in an unpredictable world of storms. It's also the best way of passing on our common heritage. Like baking gingerbread cookies. 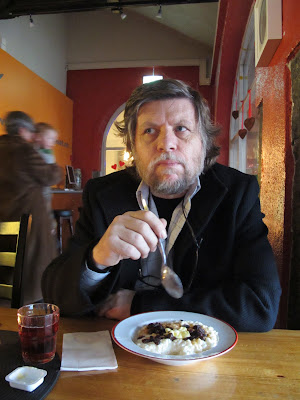 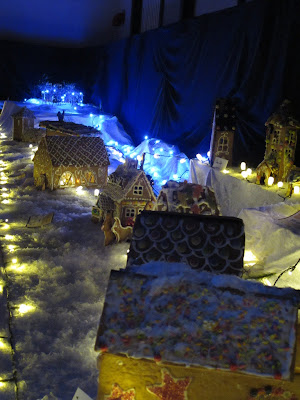 Families, kindergartens, even the giant Statoil plant took part in making a gingerbread village, competing for the prettiest building. 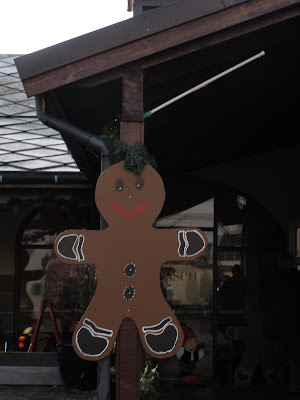 The exhibition stood for two weeks in a public center for youth and elderly people together. 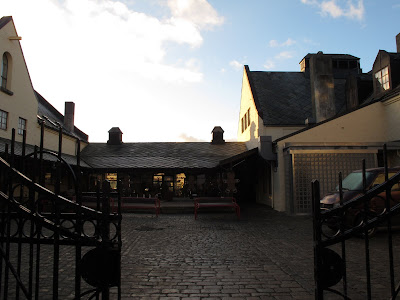 The center is called The old Slaughterhouse, cause way back it really was a slaughter house. We used to frequent this place a lot in the eighties and nineties. 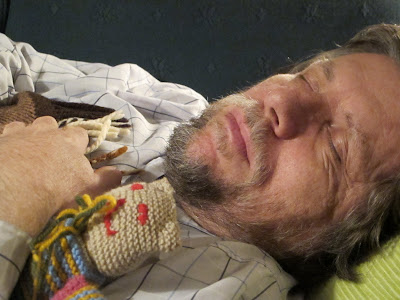 There were also a huge craft market. I bout this hand knitted cat for less the 2 dollars. Gunnar agreed to pose with it. 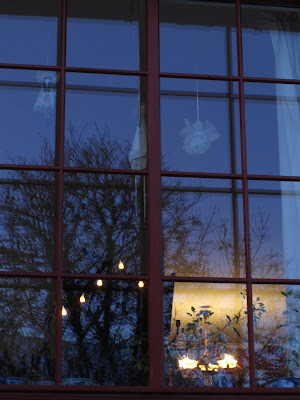 Out in our garden looking inside. 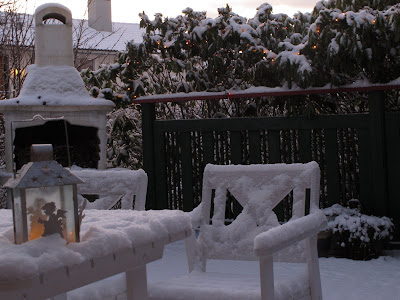 Some red, even out on our terrace. 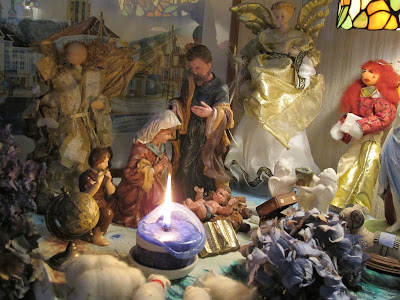 Our Nativity Scene have figurines assembled through years in different materials and styles. Serina's self made, happy, red haired angel is a must. 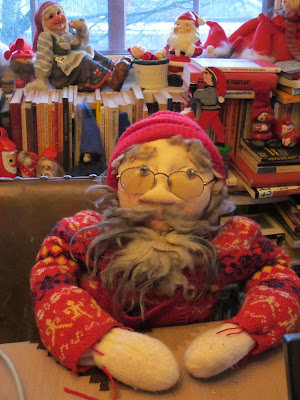 The old youlenisse is wearing a jumper my mother knitted for me when I was 1 year old. He is the Norwegian pendant to Santa Claus, but only loosely connected. Every farm had nisses living in the stable, like the trolls lived in the mountains and the hulder; partly wonderful young girl, partly cow (hidden under the skirt)lived up on the summer farmland in the woods. The youlenisse was to be fed with the best porridge for Christmas, or he could do a lot of harm both to the people and the animals on the farm. Some hundred and fifty years ago he was slowly transferred to the continental Santa. But he kept his name and his farmer clothes. 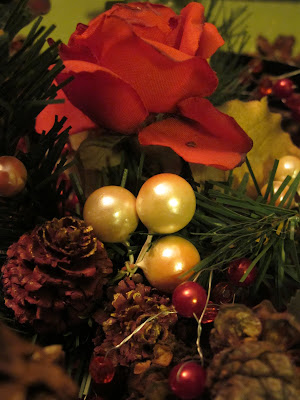 From our kitchen, a silk rose. 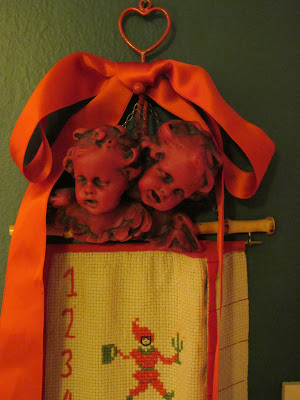 Our advent calendar, embroidered by my mother about 1956, with the help of my brother and me. The youlenisse is holding a jug of ale in one hand and a Holy Three King's candle in the other. Combination of paganism and Christianity. 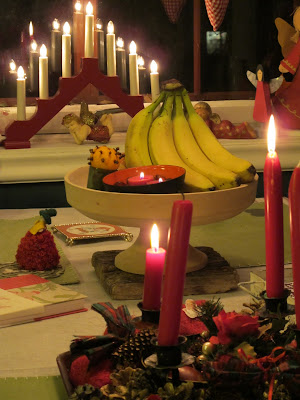 In every Norwegian home you can see this advent lights in one or more windows. In the wooden bowl is and advent orange with 24 cloves in it.
The true fragrance of Christmas. The picture was shot last week, therefor only two candles are lit on our advent wreath. 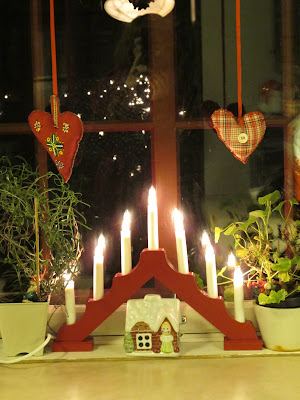 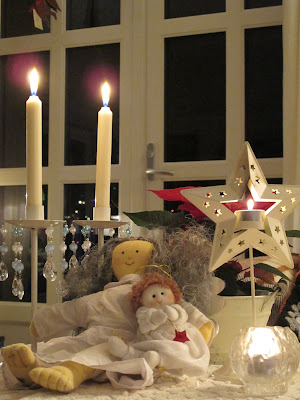 Our TV room is partly decorated in pastel, except for the poinsettia.
Today, Monday 13th, we celebrate Santa Lucia, a Sicilian saint. Children are dressed in white, singing the ancient song about this remote saint, while carrying candles and handing out buns. Nobody really knows why this special saint is so tightly connected to Scandinavia. Not even 500 years of protestantism has managed to delete this beautiful celebration. 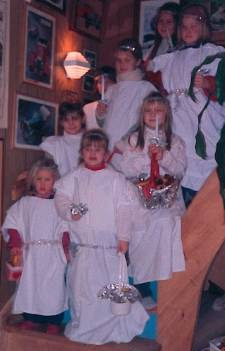 Serina in front of her friends on Lucia day 19 years ago.